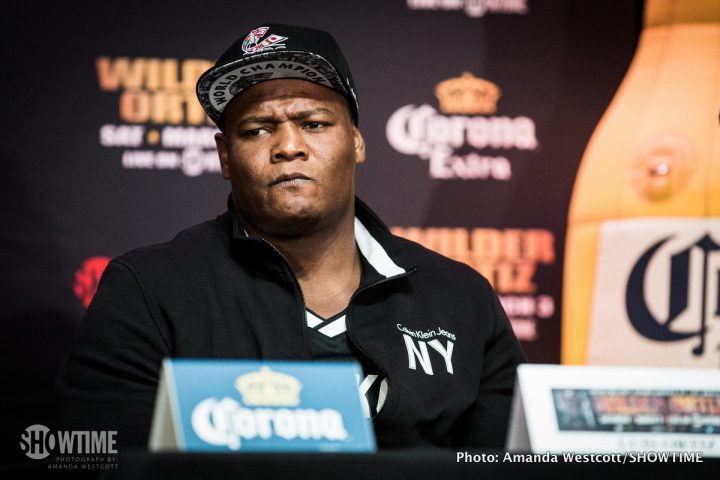 By Tim Royner: Luis ‘King Kong’ Ortiz (28-1, 24 KOs) has called out former heavyweight world champion Tyson Fury to volunteer to be his next opponent for his comeback. Fury re-launched his career last Saturday night, beating 5’9” cruiserweight Sefer Sefer by a 4th round knockout.

Ortiz, 38, likely saw Fury’s victory over Seferi and now wants a piece of the action to take on the 6’9” British native. If Fury wants to shake up the boxing world, he can do so by agreeing to accept Ortiz’s challenge by facing him in his next fight.

Fury will be fighting next in less than two months from now on August 4 against an opponent still to be determined at Windsor Park in Belfast, Northern Ireland. Fury will be fighting on the undercard of former super bantamweight champion Carl Frampton’s potential fight against Luke Jackson. Fury is supposed to be taking a step up opponent for his second. It would be nice if Fury were to fight the 6’3” Cuban Ortiz, as it would show some courage to the boxing world.

Ortiz gave WBC heavyweight champion Deontay ‘Bronze Bomber’ Wilder all kinds of problems last March in a losing effort. Ortiz hurt Wilder in the 7th round and continued to give him problems before getting stopped in the 10th round. It was an impressive performance from the southpaw Ortiz, as he came very close to scoring a knockout. Some boxing fans feel that if the start of the 8th round hadn’t been delayed by the New York Commission, Ortiz would have knocked Wilder.

I hate to say it but it’s unlikely Fury wants any part of fighting Ortiz. That guy is WAY too dangerous for the still flabby Tyson, who looked worse than awful last Saturday night in struggling to beat the obscure fighter Seferi. Even if Fury were fully back with eight fights under his belt, he likely wouldn’t want to take a fight against a dangerous fighter like Ortiz. #1 WBC heavyweight contender Dillian Whyte chose not to fight Ortiz after the World Boxing Council ordered the two to face each other in a title eliminator to determine the mandatory challenger to Wilder.

Ortiz seems to scare away most of the heavyweights in the division. The only guy that was willing to step up to the plate to take on the dangerous Cuban is the 6’7” Deontay, and he almost paid the ultimate price in taking him on. Anthony Joshua and his promoter Eddie Hearn didn’t take the fight with Ortiz when they had the chance to make the fight. Only Deontay showed the courage to take him on.