Joseph Parker vs. Bryant Jennings targeted for Aug.18 on ESPN 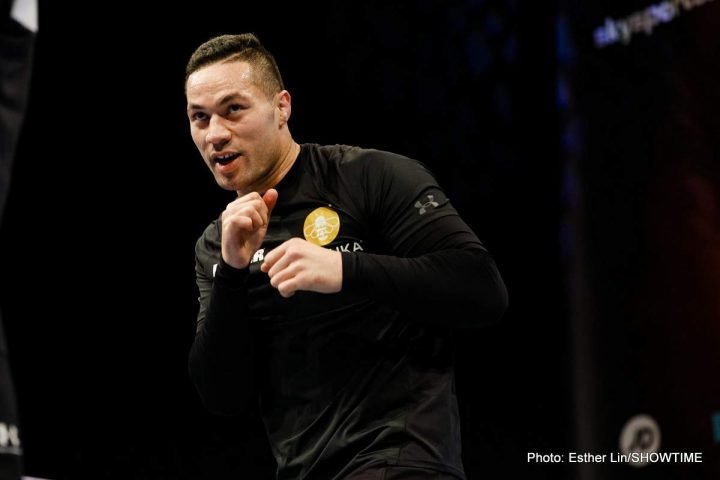 By Jeff Aranow: An interesting fight between former WBO heavyweight champion Joseph Parker and former title challenger Bryant Jennings is in the works for August 18 on ESPN at the Ocean Resort Casino in Atlantic City, New Jersey.

Dan Rafael is reporting that Top Rank, the promoters for Parker (24-1, 18 KOs) and Jennings (23-2, 13 KOs), are looking to put the fight together. It’s still not a given the fight gets made, but Top Rank is working on it.

Top Rank was hoping to match Jennings with Parker when he was still the WBO heavyweight champion, but unfortunately, Joshua got to him before he did and beat him.

Parker, 26, lost his last fight to IBF/WBA heavyweight champion Anthony Joshua by a 12 round unanimous decision on March 31 in Cardiff, Wales. It was an odd fight with the referee keeping Parker on the outside all night long with him pulling him away from Joshua each time he attempted to work on the inside. It looked very strange. Joshua was also acting like he was the one in charge. At one point, Joshua called a timeout himself without asking the referee. Parker lost the fight largely based on the referee not letting him fight in close.

Jennings fought for a world title against former heavyweight champion Wladimir Klitschko in April 2015, but he was beaten by a 12 round unanimous decision at Madison Square Garden in New York. In Jennings’ next fight, he was stopped in the 7th round by Luis ‘King Kong’ Ortiz in December 2015. Jennings stopped fighting for almost two years after the loss to Ortiz. Top Rank signed Jennings and brought him back and he’s now won his last four fights.

Jennings initially looked really good in beating Daniel Martz, Don Haynesworth and Akhor Maralimov. But in Jennings’ last fight, he struggled to defeat Joey Dawejko by a dull 10 round unanimous decision on April 28. Jennings won the fight by a one-sided decision, but the fight was very boxing to watch. Jennings looked less than a world class fighter. He looked more like a journeyman.

Parker should win this fight without any problems if he’s allowed to work on the inside. Jennings has a super long reach of 84” inches, and he’ll likely be trying to jab Parker from the outside the same way Joshua did. Parker would have gotten to Joshua plenty of times to do damage on the inside, but the referee wouldn’t let him. If Parker has a similar referee working the fight against Jennings, then he’s going to need to be quick when he fights on the inside in order to get his shots off before the action is broken up.


« Keith Thurman expected back on August 4 in Brooklyn, NY