Hearn says Povetkin is likely next for Joshua 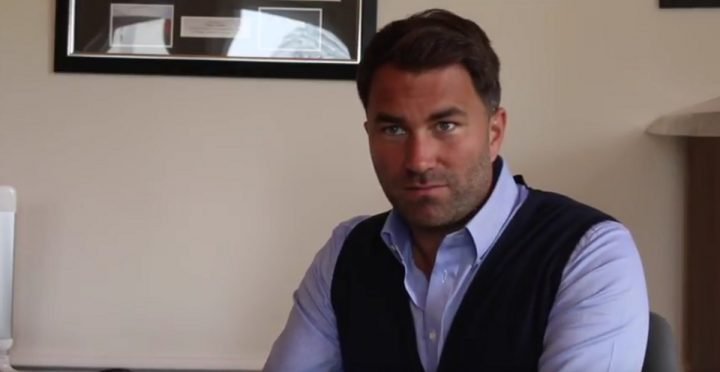 By Scott Gilfoid: Matchroom Boxing promoter Eddie Hearn thinks Deontay Wilder and his management are playing games by not returning the contract for the Anthony Joshua fight, so he now is ready to move on and match AJ against WBA mandatory challenger Alexander Povetkin for September.

It looks to some that Hearn never wanted the fight with Wilder from the beginning. There was never a date or a venue for the fight. The flat fee offer of $12.5 million that Hearn gave to Wilder’s management was the biggest hint that he wasn’t serious, as the fight is expected to bring in over $100 million. That’s a 90-10 split in Joshua’s favor that Hearn offered Wilder.

Wilder’s management received the contract for the Joshua fight nine days ago, and they’ve been looking it over and picking out areas that they want changes made. Hearn wanted a faster turnaround with the contract, but that’s not easy to do when you’re dealing with experienced professionals, who need to look closely at the information. Wilder has an excellent management team, perhaps the best in the business.

“It’s very, very frustrating and right now it looks like Povetkin is next,” Hearn said to skysports.com.

Hearn sounds sympathetic with the World Boxing Associaion, saying that they’ve been waiting patiently for the Joshua-Wilder negotiations to be completed, but finally the

This is a risky thing for Joshua to walk away from the Wilder fight in order to face Povetkin, because the 38-year-old Russian talent has the punching power to upend AJ and put a stop to his reign as a heavyweight champion. If Joshua loses to Povetkin, then you can forget about his fight with Wilder being the huge money maker that it could have been. Joshua would need to face Povetkin in a rematch and prove that his loss to him was just a fluke thing. Two losses for Joshua to Povetkin would basically smother his career. Yeah, Joshua and Wilder could still face each other in the aftermath, but what kind of interest would there be from the boxing world in such a fight. I don’t think it would be anywhere close to the same kind of interest.

“They have been waiting and to be fair to them, they have been patient, but [WBA president] Gilberto Mendoza has clearly decided enough is enough and we’ve got to move,” Hearn said.

Hearn doesn’t sound too bothered by the possibility that Joshua will need to sign for the Povetkin fight within 24 hours. The WBA’s deadline clearly comes at the perfect time for Hearn, because now he has a way out of the Wilder fight. I’m just saying. The Joshua-Wilder fight will eventually happen, but it’s clear that Hearn isn’t ready for it to take place as of yet. It’s likely going to happen after Joshua fights the following contenders first: Povetkin, Jarrell ‘Big Baby’ Miller and Dillian Whyte. Once Joshua has beaten those three, he’ll have exhausted all his options available to him, aside from Wilder. At that point, I see Hearn pulling the trigger on the Wilder fight, unless he chooses to do a rematch with former WBO champion Joseph Parker. The officiating for the Joshua-Parker fight last March was something awful, and there clearly needs to be a rematch with a competent referee working the fight next time.