GGG has the edge against Canelo in rematch 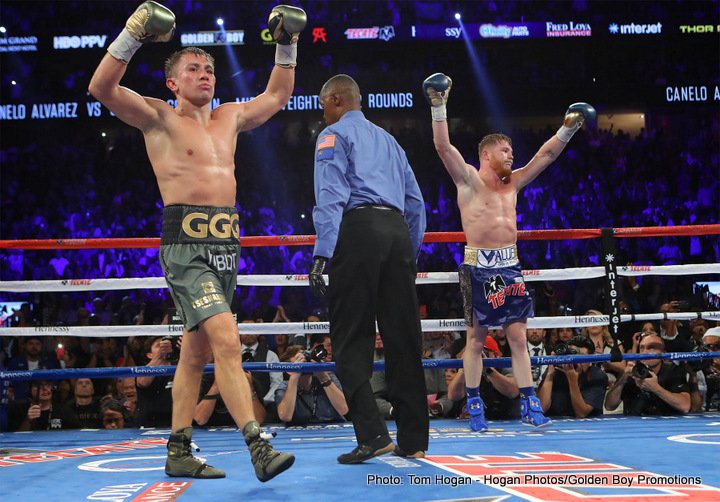 By Sean Jones: Gennady Golovkin (38-0-1, 34 KO) will have a big edge over Saul Canelo Alvarez (49-1-2, 34 KOs) in their September 15 rematch. It doesn’t even matter that Team GGG has agreed to fight Canelo in Las Vegas, Nevada at the same venue as their previous fight at the T-Mobile Arena. GGG has more ability to improve than Canelo can.

There’s no question that Golovkin has the better engine and can fight harder in the rematch. Canelo won’t be able to do that, so he’s going to be in deep, deep trouble on September 15. Golovkin will make corrections to the mistakes that he made last time, and go ahead and win the fight in an easy fashion this time. I don’t think it matters if all three of the judges are the same ones that worked the first Golokin-Canelo fight. Golovkin knows what he’s up against potentially with the judges and the venue. It’s hoped that the judging will be fair, and the fight will be scored in a more logical manner than their first one. GGG knows that he’s the visiting fighter and it could be difficult for him to win a decision against the home fighter Canelo. For this reason, Golovkin is going to be looking to hurt Alvarez with every opportunity by staying close, tagging him as hard as humanely possible to the body and to the head. It’s no longer Mr. nice guy from Golovkin. He will be looking to hurt Canelo on September 15.

If Canelo turns his back when Golovkin throws body shots, the referee will know ahead of time that this is a ploy that Alvarez uses to keep from getting hit to the midsection. He turns his back to Golovkin in a move to try and get the referee to warn him for throwing body shots. The referee will be told ahead of time that Canelo likes to turn his back when he sees body shots coming. It’s a trick the uses to try and get sympathy from the referee. It worked last time Canelo fought Golovkin, as the referee warned GGG about throwing body shots to the back of Alvarez. The referee was asleep at the wheel, and not mentally engaged at seeing what Canelo was doing. It seemed clear to me what Canelo was doing in turning his back to GGG, but for some reason this referee was unable to see the obvious.

Golovkin already has full knowledge in how to beat Canelo by applying pressure, and cutting off the ring. Canelo survived the full 12 rounds against Golovkin on September 16 last year because Golovkin thought he could box him, and he started too slowly in the first three rounds of the contest. Next time it’s not going to be like that.

Golden Boy Promotions are counting on Canelo, 27, winning the fight because he’s their flagship fighter in their stable of fighters. Canelo is Golden Boy’s No.1 money fighter. If Golovkin beats him badly by battering and knocking him out, he’s going to lose a ton of value with the boxing fans. Instead of Canelo being able to bring in close to 1 million PPV buys in mismatches against horrible opposition like Julio Cesar Chavez Jr., Canelo will see his PPV buys drop off the side of a cliff with him receiving a lot fewer buys. Whether Canelo can come back from a bad knockout loss to GGG is hard to predict. Canelo will need to take more career risks to rebuild his fan base, that’s for sure. Instead of Golden Boy being able to match Canelo against Gary ‘Spike’ O’Sullivan in December, they may need to bite the bullet and put him in with the No.2 middleweight in the division in Jermall Charlo. Will Golden Boy do that? I doubt it. As such, Canelo’s career will limp along if he loses to GGG on September 15. It’s doubtful that Canelo will ever be the PPV fighter that he once was if Golovkin knocks him out cold in their rematch on September 15, and I believe that’s what he’s going to be looking to achieve. Golovkin discovered that he won’t be given a decision by the judges against the popular Canelo, so now he knows not to waste his time by out-boxing him like he did last time. This time it’s going to be full steam ahead for GGG. He’s going to make sure he goes all out from start to finish looking for a knockout, because he’s not going to be given a decision against him. You’d like to think that the judges will make sure that they do their level best scoring the fight after the poor set of scores from the three judges in the first GGG-Canelo fight, but I don’t think that’s going to happen. The venue is Canelo’s at the T-Mobile Arena in Las Vegas, so that most likely means that we’ll see wacky scores like last time. As such, Golovkin isn’t going to let himself get robbed a second time by the judges.

These are the things that Golovkin has going for him in the rematch with Canelo:

– Strength: Golovkin is the more powerful fighter of the two. Canelo likely will outweigh Golovkin, but he won’ have his punching power

– Better planning: Golovkin won’t have to solve the riddle of Canelo like he did last time when the Mexican star surprised him by running around the ring for most of the fight. If Canelo uses the same plan, then Golovkin will be ready for him. If Canelo chooses to go to war, then that’s a style that Golovkin is well prepared for, as he prefers his opponents to stand and fight rather than run from him like Canelo was doing. GGG now knows that Canelo will likely run from him in order to limit the amount of pressure he has to deal with. Canelo’s lack of stamina will force him to run from GGG because he doesn’t have the conditioning needed to fight hard for a full three minutes of each round. Canelo can only fight hard for one minute before he needs to rest against the ropes for a minute or two. Golovkin allowed Canelo to do that last time by his decision to stay on the outside. Canelo was then able to move to his left so he could steal time to rest. Golovkin isn’t going to stay away from him in the rematch because he now is well aware that Canelo will run and look to stall out the rounds and steal them by landing one or two shots.

– Canelo is coming off of knee surgery: Canelo recently had knee surgery to repair a problem in his right knee. Coming back from knee surgery takes many months and it’s often that a fighter isn’t the same for a prolonged period of time. I don’t think Canelo is going to be the same fighter he was by the time he faces Golovkin in September. His knee needs more time to get back to full strength. Even if Canelo is able to get to 70 percent strength, it’s not going to be enough for him to be the fighter that he was last time

– Canelo’s inactivity: Canelo made two mistakes that have resulted in him being inactive for an entire year. His first mistake was his decision to sit and rest on his backside for eight months after his controversial 12 round draw last September. Instead of getting back inside the ring to face Golovkin in the rematch in December of last year or in January, Canelo decided he wanted to wait 8 months before fighting again on May 5, 2018. That was a stupid mistake on Canelo’s part, because he can’t stay sharp by sitting out of the ring for 8 months. It’s possible this was a move on Canelo’s part in hopes of aging Golovkin a little so he could gain an edge against him. If that move was intentional, it was a short-sighed idea, because Golovkin looked great last May in destroying Vanes Martirosyan in 2 rounds. The second bad decision on Canelo’s part was him eating tainted clenbuterol-filled beef. If Canelo knew the risks of eating meat in restaurants in Mexico, then he shouldn’t have ever done so. If the reason for Canelo testing positive for clenbuterol was because he purposefully took the substance to try and gain an edge against GGG, then that was an even worst decision on his part. If it was intentional, then Canelo hurt his own popularity in taking a gamble. The Nevada State Athletic Commission’s six-month ban was a slap on the hands for Canelo, but when you combine that with his 8-months of inactivity since his previous fight, it really adds up. Instead of Canelo being out of the ring for eight months, he’ll be out of action for 12 months. If this is the best that Canelo can be due to whatever circumstances that led to his change in his physique, then it’s unlikely he’ll be carrying that same kind of muscle in the rematch. A weaker, smaller Canelo will be easy pickings by Golovkin.

– Canelo’s need to improve his stamina will make him smaller. If Canelo works on his cardio a great deal for the rematch, it’s going to result in him getting smaller. Golovkin won’t be smaller. He’ll be just as strong as before if not stronger

– Golovkin will start training camp for the Canelo rematch in better shape. Golovkin was bloated when he started training for the rematch against Canelo last year. Golovkin looked fat due to him letting himself go after his win over Daniel Jacobs. This time, Golovkin has been motivated and active in training hard for his May 5th fight against replacement opponent Vanes Martirosyan. Golovkin won’t be starting his training camp for the Canelo rematch out of shape, and he’ll be looking to beat the brakes off the Mexican star. That’s not good for Canelo because Golovkin will be in better shape the second time around.

Boxing » Canelo Alvarez » GGG has the edge against Canelo in rematch