Deontay Wilder holding the WBA and heavyweight division to ransom 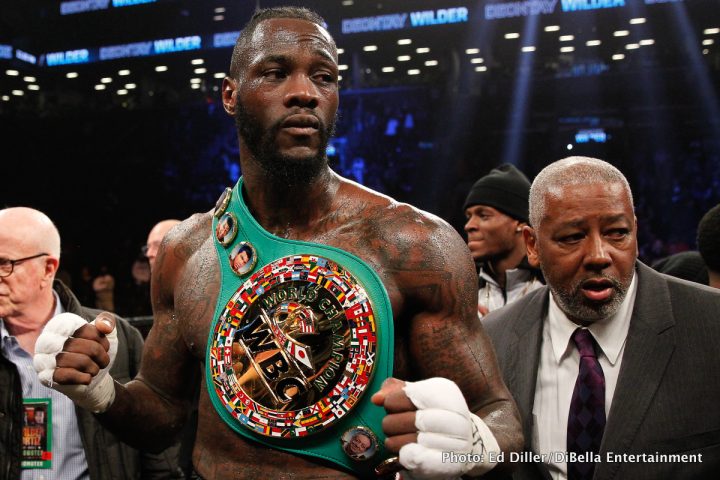 By Damian Poole: Sad news for some boxing fans this week as WBO, IBF, WBA(super) and IBO heavyweight champion Anthony Joshua (21-0-20 KO’s) was order by the WBA to finalise a fight with the Russia, Alexander Povetkin (34-1-24 KO’s) within 24 hours as of Tuesday 26th June or be stripped of the belt.

It would seem not only is Eddie Hearn getting tired of Deontay Wilder’s stalling tactics but also the WBA, they released the following statement on the 26th

“Today the WBA requested an answer from Anthony Joshua’s team regarding his fight with the mandatory challenger Alexander Povetkin,” Hearn said to Reuters. “It appears the Wilder team have not returned the contract for the fight and therefore we are requesting a date for the Joshua versus Povetkin fight with immediate effect.”

So, there you have it boy and girls. Even the WBA can see wilder does not want the fight as Shelly Finkel is unwilling to return the contract with any kind of urgency back to Eddie Hearn with Deontay’s Wilder’s signature on it. Alexander became Anthony’s mandatory challenger in early April, but due to the delays in negations with Wilder’s team and Eddie Hearn running out of extension requests which the WBA confirmed in their statement. “The WBA have allowed over a month extension to negotiations with Povetkin and also ongoing discussion with Deontay Wilder,”” But now the WBA have had enough of team Wilder not taking this fight seriously and decided to take matters into there own hands.

Time line of negotiation between Anthony Joshua and Deontay Wilder

November 2017, Eddie Hearn travels to the USA to meet with Wilder’s team to discuss a possible fight. But discussions soon broke down after Wilder demanded a 50-50 split.

March 2018, Barry Hearn (Eddie Hearn’s father) travels to the USA to help with the stalled negotiations between the two camps.

March 28th, Deontay cancels press conference meeting in the UK with Eddie Hearn and also to commentate for Sky boxing on the Anthony VS Joseph fight.

April 11th Eddie Hearn sends team wilder a fixed opening offer of $12.5m but Wilder was not impressed with the “take it or leave it offer” and said they will respond appropriately in the next day or two with a counter offer.

April 26th Wilder makes a counter offer worth $50 millions but with a 24-hour dead line.

May 21st Anthony Joshua vs Alexander Povetkin pencilled in for a September, possible UK-Wembley fight if negotiation break down with Shelly and Wilder.

May 22nd Anthony Joshua officially rejects Wilders $50 million offer, stating he wants to fight in the UK for the fans and home advantage. A new revised offer is sent to Deontay Wilder reported to be between $15-$20 million

June 26th WBA give Eddie Hearn 24 hours to make the fight with Povetkin or be striped of the belt.

So that is basically the main events between to two camps, as I was preparing this timeline I could not help but notice the amount of time Wilders team wasted responding to Eddie Hearn. It was almost like they purposely wanted to drag the negations out for whatever reasons. Most boxing fans believe Finkel did not believe Wilder was ready to step up against Anthony after only facing one real live opponent in 40 fights. I’m more inclined to believe this theory as Shelly Finkel said the same thing when Wladimir klitschko called out Wilder many years ago.

In total Wilder and Shelly wasted 7 weeks with there lack of urgency in replying or accepting any terms put before them, set by Hearn. If it was not for this blatant time-wasting approach, this fight would have been made a long time ago. Then the WBA would not have grown tired of team Wilders antics. So, I can totally see why the WBA forced the 24-hour dead line on Eddie Hearn after reading Shelly Finkel’s ridicules comments about taking a week to return the contract unsigned with some notes that needed clearing up. The hole point of having a mobile phone or email address is speed up communication between two parties is it not? Why would Shelly Finkel want to send the contract back in the post in the first place and not just pick up the phone and call Eddie or Barry? It can only mean one thing, but I will let you the readers make your own minds up what reason is, but we all know why!

More importantly why did it take Wilder four weeks to accept the revised terms in the first place? Did he need permission from Shelly Finkel or the LDBC (Lions Den Boxing Community)? Most boxing fans believe Wilder was dragging his feet to force Anthony into signing a fight with Alexander Povetkin. Then wilder can say on Twitter (of course) that Anthony ducked him.

Well I got some bad new for Deontay Wilder, in a recent interview with iFL TV, Eddie Hearn said the offer is still on the table, the same offer Wilder accepted all the terms too. So, when Hearn receives the unsigned contract back from Shelly and these two note points have been cleared up. There should be no excuse why Wilder can not sign the contract and have the fight made for early 2019.

Eddie Hearn has even taken the liberty to sweeten the deal for Wilder, by offering him a “stay busy” $5 million to fight any opponent of his choice in NY, weather that’s Dominic Breazeale or Bermane Stiverne 3.0, while he waits for Anthony to beat Povetkin in September. And then there is the increased offer of $15 million from the original $12.5 million to fight Anthony afterwards. That’s $20 million for two fights which is more than he has made in his hole 41 fight career.

But according to Wilder’s latest social media rant, he claims the $20 million dollars as “crack head money”. But what else are you supposed to offer a crackhead? This man is clearly delusional as Eddie Hearn puts it. If $20 million is crackhead money, what was the $900K Wilder received for fighting Gerald Washington? Chump change?

To be honest, I’m glad that Anthony Joshua is fighting Povetkin next. This will secure the WBA belt stays with Anthony albeit he defeats the Russian first. But If Wilder was Joshua’s next opponent, and as many boxing fans predict, Joshua would be victorious. Then I’m sure Wilder would have invoked his rematch clause. Thus, meaning Anthony is legally contracted to fight Wilder straight after and postpone facing his mandatory challenger (Povetkin). Anthony would then be stripped of his belt WBA belt by the sanctioning body.

To be honest, I’m not surprised this fight did not get made. As I stated in my previous article “Lou Dibella confirms Joshua vs Wilder fight not happening” Deontay had a fight already lined up with fellow American Dominic Breazeale who already lost to Joshua. This fight was made before Joshua fought Parker back in April with Dominic confirming such news on social media himself. So why did Wilder bother with all this” I want Joshua” hype in the first place? Maybe to increase his popularity off Joshua’s back to help sell tickets for the Dominic Breazeale fight which let’s face it, is a damp squid of a fight! I’m Just saying.