Artur Beterbiev to remain with GYM until 2021 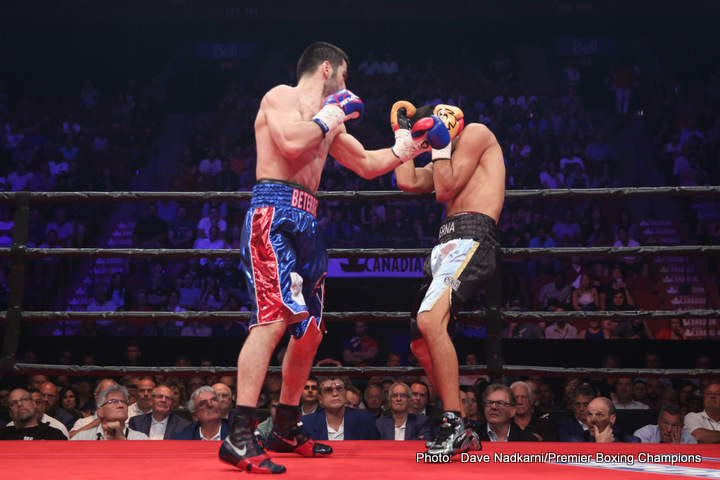 By Allan Fox: Artur Beterbiev has lost his court case with his promoter GYM, and will need to stay with them until 2021, according to TVA Sports. The 33-year-old IBF light heavyweight champion Beterbiev (12-0, 12 KOs) had been hoping to win the year-long case and move on from GYM to another promotional company. The 2-time Olympian Beterbiev can appeal his case if he wishes.

Beterbiev will be 36-years-old by the time his contract ends with GYM. Whether he still has enough left in the tank at that point to compete with the best fighters in the 175lb division is unclear. We’ll have to see. It’s motivating that fighters like middleweight champion Gennady Golovkin and WBC light heavyweight champion Adonis ‘Superman’ Stevenson are still able to fight at a high level once they reached 36. Perhaps Beterbiev can too.

“It’s official. Artur Beterbiev lost his case against the GYM Group. The judge considers that the GYM Group did not make any errors that justify a breach of contract. GYM remains the promoter of Beterbiev until 2021 according to the documents of the Court,” said Nancy Audet of TVA Sports at @naaudet_TVA.

Beterbiev is expected to defend his IBF title against unbeaten Callum Johnson next. This will be a tough fight for Beterbiev, as Johnson can bang and he’s unbeaten. Beterbiev still figures to be the favorite in that fight, because he’s got the better pedigree. Johnson might have as much power as Beterbiev, but he has less ways of winning. Beterbiev can box as well as punch, and he’s a dangerous fighter on the inside when he’s not being tied up by his opponents. A number of top contenders opted not to face Beterbiev for his first defense of his IBF belt. Johnson, 32, was the one guy that stepped up and agreed to face him.

Beterbiev’s career has been hampered by injuries and inactivity in the last two years. Beterbiev had a shoulder injury that kept him from fighting through most of 2017. He finally returned to the ring and stopped Enrico Koelling in round 12 to claim the vacant International Boxing Federation light heavyweight title on November 11th last year in Fresno, California. That was Beterbiev’s first fight in 11 months, and he did not look good. Beterbiev didn’t shine like he had in his two previous fights against Isidro Ranoni Prieto and Ezequiel Osvaldo Maderna.

Beterbiev needs to be more active in defending his IBF 175lb title. For him to become a star and to maximize his time as the IBF light heavyweight champion, Beterbiev needs to fight at least two to four times per year. Fighting only one time per year is a waste of Beterbiev’s career, as he’ll age out without accomplishing much.