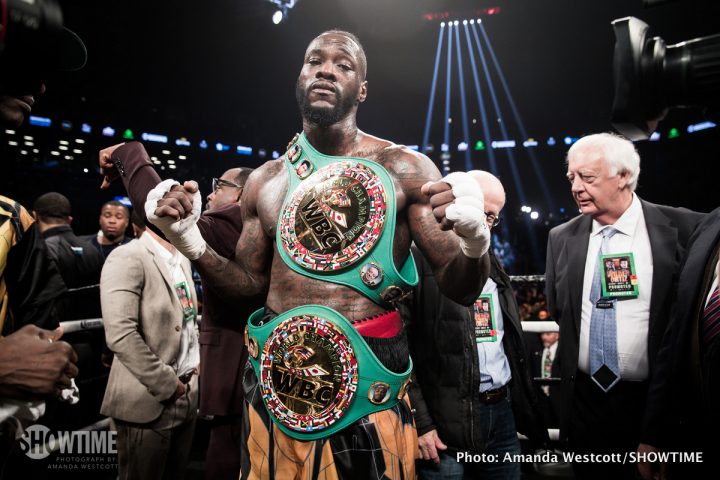 By Scott Gilfoid: WBC heavyweight champion Deontay ‘Bronze Bomber’ Wilder (40-0, 39 KOs) says he’s willing to give IBF/WBA heavyweight champion Anthony Joshua (21-0, 20 KOs) by fighting him in the UK for their first of two fights, but his $50 million guaranteed purse will be slashed by $20 million to $30 million.

Joshua’s decision not to leave his home country of the UK for the first fight will cost him $20 million. That’s obviously not a great move for a fighter who wants to become the first $1 billion fighter. Losing $20 million based on fear is a wrong-headed move, and it suggests that Joshua may never even get close to making $1 billion if he’s going to avoid putting himself at risk.

It’s predictable how Joshua will react when he hears that his guaranteed offer of $50 million is slashed to $30 million because of his stubbornness and unwillingness to fight in the U.S. Joshua will surely reject the $30 million reduced offer for the Wilder fight. I mean, if Joshua will willing to walk away from a guaranteed $50 million to fight in the U.S, he’ll likely do the same thing if he sees his money chopped nearly in half because of his unyielding mindset. The thing is, Joshua isn’t going to make $30 million fighting anyone else, so he’ll be shooting himself in the foot by electing not to take the $30 million. If Joshua continues to make decisions like this, then he’s going to be shooting himself in the foot left and right his entire career. He’s got to grow up and realize sometimes you can’t get everything slanted in your favor. Joshua has had things in his favor since he fought in the 2012 Olympics, which was staged in London, England. After appearing to lose three of his four fights in the Olympics, Joshua was given a gold medal. It looked to many fans as home cooking to the extreme. Since then, Joshua has never level the UK to fight. It’s always been fights at home for Joshua. In Joshua’s last fight against WBO heavyweight champion Joseph Parker, the referee working the contest spent the entire fight pulling Parker off of Joshua when he was trying to fight him on the inside. Wilder saw the fight and he says the referee was clearly helping Joshua.

”The referee helped him out,” Wilder said about the referee appearing to help Joshua in his recent fight against WBO heavyweight champion Joseph Parker by preventing the New Zealand fighter from working on the inside. ”It was Batman [Joshua] and Robin [the referee] in the ring. Personally, I thought Parker won. Of course, Joshua is in his country and the biggest fight in the world is between me and him. It’s coming soon, baby. Be ready for the biggest fight of your lives,” Wilder said.

I hate to say it but it looked to me like the referee was helping Joshua as well. I’ve never seen a referee negatively impact another fighter as much as I did with this referee crippling the game of Parker, preventing him from working on the inside. Just imagine the uproar that Joshua’s promoter Eddie Hearn would have created if there was a referee that prevented AJ from fighting on the outside. If Joshua was forced to fight on the inside the entire fight against Parker, he would have been at the mercy of his short power shots and likely would have been knocked out. The referee hurt Parker’s game in the same way by keeping him from fighting his fight and leaving him no choice but to fight on the outside. It’s unclear whose decision it was for this referee to work the Joshua-Parker fight. Parker arguably deserves a rematch because that fight didn’t even look like a real fight. It looked like Joshua was in the ring with a team member running interference to keep Parker off him. During one moment in the fight, Joshua called his own time out and walked back to his corner to have his tape fixed on his glove. Joshua didn’t even wait for the referee to let him know whether he was going to give him the timeout. Joshua just turned his back and walked back to his corner. It was the strangest thing. Joshua is lucky that Parker didn’t run over to him and brain him in the back of his head, because you don’t see too many fighters calling their own timeout without the referee saying yes or no. When I saw that move by Joshua, I knew it was going to be a long night for Parker, because AJ was essentially in charge inside the ring. That’s why it would be an insane move for Wilder to agree to fight Joshua in the UK, because if he gets a similar referee, there’s no telling what oddity we could see.

“The fight will happen,” Wilder said about the Joshua fight. “Joshua said he wanted $50 million and he’d sign tomorrow. We did that exactly what he said and he didn’t sign, so that shows you his character already or his team’s character. I think Joshua wants to fight, but I don’t think his team wants to risk what they’ve invested. Their investment is about to go and they know it,” Wilder said.

I absolutely agree with Wilder about there being fear on Joshua’s team’s part about risking their investment by letting him fight Deontay. It appears that Team Joshua is dragging their feet when it comes to signing for the fight and risking seeing the gravy train end. But I think it’s not just Joshua’s team that is stalling on this fight. I think’s Joshua as well. I don’t think he fancies the fight, because eif he did he would have jumped all over the $50 million guaranteed offer that Team Wilder has given to him. The fact that Joshua hasn’t agreed to it shows that he’s thinking of all the bad that could happen if Wilder knocks him clean out in front of the entire world. The over-the-hill 40-year-old Wladimir Klitschko had Joshua on the canvas last year in April, but instead of looking to knock AJ to oblivion, the Ukrainian backed off and let him survive. To this day, boxing fans wonder why Wladimir did that. Did he feel sorry for Joshua and not want to wreck his career just as it started? If Wladimir purposefully took it easy on Joshua to give him a break, it won’t help him against Deontay, because if he gets hurt against him, he’s not going to be shown mercy. This is going to be like the ancient days of the Roman gladiators in the arena. If Wilder has Joshua in the arena, he’s not going to turn around and ask the Roman emperor if he should finish him or not with a thumbs up or down. Wilder is going to finish Joshua on the spot without any qualms. That’s just the way Wilder is. When he smells blood in the water, he’s on autopilot, bound and determined to finish his opponents off.

”It’s the money. That’s just a tactic that they don’t want the fight,” Wilder said about Joshua’s promoter Eddie Hearn asking for proof of funds. ”We wouldn’t have offered it if it wasn’t real. We’re not playing around. This is not a game.”

At this point there’s no doubting whether the $50 million guaranteed offer to Joshua is a legitimate offer from Wilder’s management. The only thing that is up for debate is whether Joshua will agree to the deal or if he’ll continue to insist that the fight or fights take place in the UK, which I’m not sure that they’ll happen if he’s not willing to agree to a hefty pay cut of $20 million.

”It’s not a $1 billion deal,” Wilder said of Hearn’s recent signing with the streaming surface DAZN in an 8-year deal for 16-fights per year in the U.S. “It’s over a period of time, which I think he’s going to have a very hard time signing American fighters because of their [Hearn] character of actions dealing with me. They’ve done a lot of lying. They’ve manipulated people, and they’ve contradicted themselves,” Wilder said.

Hearn signed a $1 billion deal with DAZN, but it’s spaced out over 8 years, and he can’t use up the entire amount right away signing the top fighters to his network. It’s unclear whether Hearn has access to the entire $1 billion or if he’s given access to only a portion of the funds per year, which means he would have to work on a strict budget for what he’s able to pay to the fighters he signs. That would explain Hearn offering Adrien Broner a $6.75 million deal for 3 years. If Hearn has access to the full $1 billion, you would think that he would sweeten the deal enough to get Broner. Having Broner would at least give Hearn one decent light welterweight in his stable. Broner at this point in his career is living off his accomplishments from more than five years ago. Broner hasn’t done anything in years in the real sense.

It’s not surprising that Wilder has no interest in signing with Hearn and his Matchroom Boxing USA promotional team. I think there’s too much stuff that has transpired for Wilder to sign with Hearn. Hearn has likely said too much stuff for Wilder to trust him enough to sign with him. Moreover, Wilder says it himself that he doesn’t believe that Hearn is going to be able to sign a lot of American fighters to his stable because of the way he’s acted with him Wilder sounds like he doubts whether Hearn is going to be successful with his DAZN streaming deal. As such, it doesn’t make sense for Wilder to ink with Hearn if he doesn’t believe that it’s going to work out for him, because if the deal implodes after a year or so, then Wilder could be back on his own as a free agent without the money that he thought he was going to get with Hearn. If Wilder had doubts about Hearn’s ability to swing it with his new $1 billion deal, it’s better for him to stand back and watch the carnage take place as things fall apart rapidly. It’s painfully obvious that if Hearn doesn’t start signing some top American fighters soon, he’s going to be bad off when his DAZN streaming deal starts in September. If all Hearn has is guys like Julio Cesar Chavez Jr. and Gabriel Rosado, I can’t see more than a tiny handful of boxing fans in the U.S being willing to subscribe to his streaming deal. Hearn needs to be signing the talented young guys like Errol Spence Jr. A lot of the top welterweights like Danny Garcia, Keith Thurman and Shawn Porter likely won’t be around too much longer in the sport, as they’re all in their 30s, and not getting any younger.

That’s hilarious what Wilder says about Joshua needing an endorser to put their slogan on the bottom of his shoes. If it’s going to be nose down for Joshua, then he would need an endorser to put something on his back or the back of his trunks.