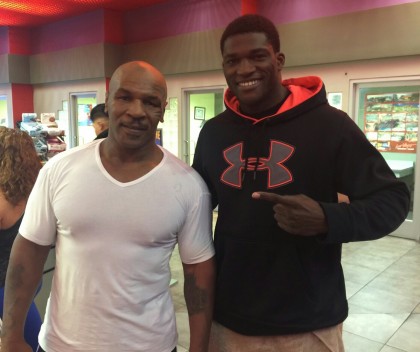 By Gavin Howie: Mike Tyson was a ferocious puncher, and an extremely intimidating fighter at his peak. He quickly destroyed his early opposition with ease to go on to become the youngest ever heavyweight champion of the world, but was Tyson’s skillset and reign overrated?

Mike Tyson finished his career with a record of 50 wins, 6 loses, and 2 no contests, losing 3 of his last 4 fights. He accomplished a lot in his career and had many firsts. He was the first to hold the WBC, WBA, and IBF heavyweight titles simultaneously. He was just 20 years of age when he destroyed Trevor Berbick in 2 rounds to win the WBC title in 1986. 1 year later he added the WBA and IBF versions by defeating James Smith, and Tony Tucker. Tyson became lineal champion in 1988 when he knocked out Michael Spinks in just 91 seconds.

Many people have Tyson very high up on the list of the best heavyweights of all time, I however, do not agree with this. Tyson was a talent, he would not have achieved what he did if he wasn’t. But to have him as an all-time great, I just simply cannot agree with. If you look closely at Tyson’s career and his opponents, it is difficult to say he actually beat any other peak great heavyweight of his era. He lost and lost clearly to Lewis, and Holyfield. He also lost to very poor opposition towards the end of his career. Who could you argue was Tyson’s best win? Maybe Larry Holmes, coming off a 2 year layoff and 2 loses in a row? Perhaps Michael Spinks was his best win, a former light heavy who fought Tyson in his very last fight? The fact is Tyson lost and lost decisively against 2 of the best heavyweights of his era in Lewis and Holyfield.

There were clearly outside troubles that plagued Tyson’s career, but judging him purely on his boxing, then I would not even have him in the top 10 great heavyweights. Tyson just did not have a career defining win, and although a very destructive puncher, he would not have enough boxing IQ to beat any of the true all-time greats like Rocky Marciano, Joe Louis, Muhammad Ali, Wladimir Klitschko etc. Tyson did have a fantastic career, and over achieved in my opinion by defeating very weak opposition to win his titles. The truth is though, when he came upon against better opposition, he lost, and he lost convincingly. What are the readers opinions on this, and do they agree?