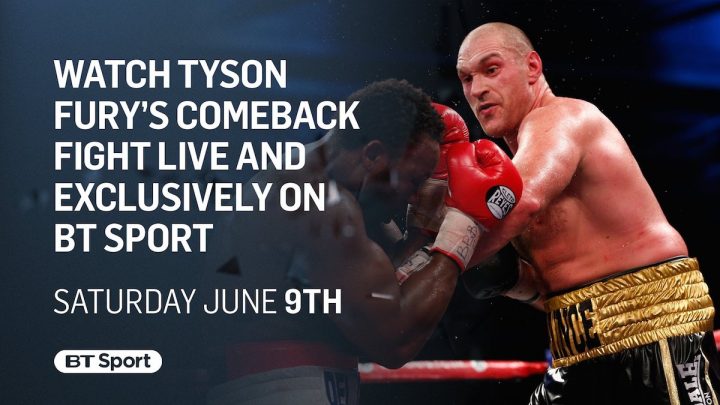 Former heavyweight unified champion Fury is coming off of a 2 ½ year layoff from boxing to resume his career. Fury wants to take it slow with his comeback, Hence the selection of Seferi for his first fight back. It wouldn’t make sense obviously to throw Fury into the ring with the likes of Alexander Povetkin or Dillian Whyte in his first fight back.

Fury is the lineal heavyweight champion. As such, Seferi will have a chance to unseat him and take honor away from him. There won’t be a title on the line for the Fury vs. Seferi fight on June 9. It’s just a simple heavyweight bout. But with the way that Fury has bragging about being the lineal heavyweight champion for the last 2 years, it’s going to be difficult for him to continue to say that if Seferi beats him on the night.

Hopefully for Seferi’s sake, he doesn’t start doing this, making himself sound deluded as Fury has been doing. The fact that Fury has been able to keep his status as the lineal champion despite being inactive for nearly 3 years is troubling. At which point does a champion lose that status? In tennis, a player can’t still call himself a champion when he’s been retired for 3 years. In boxing, a fighter should lose his championship status once they stop competing or when they’ve tested positive for drugs.

You can tell a lot of careful consideration has gone into the selection of Fury’s opponent, because they’ve picked a guy with a good record on paper in Seferi. If you look at Seferi’s record, he looks impressive. However, Seferi’s victories have come against obscure opposition in Europe with dreadful records. For example, in 2014, Seferi defeated Josip Jalusic (10-47-1, 7 KOs) and Josef Krivka (8-15). Those are just two of the poor opponents that Seferi’s record is littered with from top to bottom. When you take all the fodder away from Seferi’s record, you’re left with Manuel Charr. Seferi lost to Charr by a one-sided 10 round unanimous decision in September 2016. I remember seeing that fight and I was absolutely impressed with Seferi. He looked like he didn’t belong inside the ring with Charr, who looked terrible himself.

“We’re just three weeks away from what is going to be a huge night for the city of Manchester,”Fury said via Fight News. I’m delighted to be fighting at the iconic Manchester Arena for the first time in my career and I’m promising the fans a special performance to thank them for their loyal support.”

Even though Fury is facing a mediocre heavyweight, we don’t know what we’re going to get from him. Fury has lost a mess of weight after eating his way close to 400 pounds. Fury has lost close to 150 lbs. of weight, which is an incredible amount of weight for any person to lose. For an athlete to lose that kind of weight and attempt to get back to the top of their sport, I don’t think it’s ever been done. Fury is the modern day James J. Jeffries, a fighter that held a heavyweight title from 1899 to 1904. Jeffries then retired and saw his weight soar from 225 lbs. to 350 lbs. In July 1910, Jeffries was encouraged to make a comeback to fight Jack Johnson. Jeffries los 125 lbs. with hard work and dieting to get down to his old fighting weight of 225lbs. However, after losing all that weight, Jeffries of his former self inside the ring with Johnson, and he took a frightful beating in losing by a 15th round knockout. The kind of weight that Jeffries took off to get back down to his old fighting weight of 225lbs is similar to the weight that Fury has trimmed off. In modern times, former heavyweight world champion George Foreman made a successful comeback after 10 years out of the ring in the 1990s.

Foreman went from 350 lbs. down to 250s. Foreman was never able to lose all the fat that he’d put on during his 10 years out of the ring, but he was still able to capture the IBF/WBA heavyweight titles in beating Michael Moorer by a 10h round knockout in November 1994. Foreman had huge punching power that enabled to make up for what he lost in speed during his long time out of the ring. Fury doesn’t have any punching power to speak of. The only thing the 6’9” Fury has is height and reach, and that might not be enough for him to beat any of the better heavyweights in the division. A lot of boxing fans are predicting failure on Fury’s part in his comeback bid. Fury will probably be fine against a weak heavyweight like 39-year-old Seferi. It’s when Fury starts facing good opposition that we could see the wheels come off his game, but I don’t expect him to fight anyone with even a shred of talent until he gets a world title shot. It’s so predictable. Fury will almost surely fight fodder opposition right up until he faces heavyweight champion Anthony Joshua or Deontay Wilder, depending on which of them is the champion by that time the ‘Gypsy King’ is ready for a title shot.

Fury is now trained by Ben Davison, who has assisted him in losing a lot of weight to carve the fat off his nearly 400lb frame. Fury isn’t quite back to the weight that he was at previously for his last fight against Wladimir Klitschko in November 2015, but he’s not far from that. Weight loss doesn’t mean that Fury will be able to get back to the level he was at in 2015. Almost three years of soft living and a bad diet is going to make it almost impossible for Fury to find the form that he had in 2015. We’ll see the difference right away when Fury faces Seferi in the form of decreased hand speed and reflexes, and likely stamina issues that will show up if the fight goes past the first 4 to 6 rounds.

If Seferi is able to get Fury into the second half of their 10-round fight on June 9, we could see him start to labor and blow blue smoke out his back end. Fury is like an old car with 300, 000 miles on it at this point. You just don’t whether that old car will make up a hill without blowing a gasket. If Fury does implode against Seferi, I don’t be surprised in the least. All that weight that Fury has taken off his frame in a short period of time. It’s almost certain that Fury is going to be weak as heck inside the ring, and literally a shell of his former self. If Seferi has sense, he’ll go after Fury immediately and force him to fight as hard as he can to wear him down. Fury is not an athlete. He’s a guy that is getting off the couch after years to try ad compete against a fighter that makes a living from the sport. Seferi could give this version of Fury a lot of problems, I hate to say.

“This is going to be a hard fight for Fury,” said Seferi via Fight News. “I’m very disciplined and always ready to take on everyone and anyone. This will not be an easy night for him. I’m coming to Manchester to beat one of the boxing legends of the 21st century.”

I don’t know about Fury being one of the “boxing legends of the 21st century,” as Seferi refers to him, but he is a guy that got lucky in beating an over-the-hill 40-year-old Klitschko in 2015. I give him that. Wladimir was never the same guy after his trainer Emanuel Steward passed away. Had Steward been there with Wladimir, he would have given Fury a royal thrashing in my view. Without Steward, Wladimir was completely lost and didn’t know what to do against Fury. Wladimir wasn’t listening to his trainer Jonathon Banks on the night, that’s for sure, but that’s not surprising. Ever since Banks took over as Wladimir’s trainer after the passing of Steward, the Ukrainian fought like he was on cruise control. Wladimir never fought like he was following the instructions from Banks. With Steward, he was able to get Wladimir to be more aggressive by motivating him in the corner. Banks was unable to do that for Wladimir’s fight with Fury. As such, Fury’s win over Wladimir is tainted. He wouldn’t have won if Wladimir was still with Steward. No way would Fury have won that fight. It would have been a wipe out if Steward had been there that night. He would have told Wladimir after the first round, ‘Go get him and punch his lights out,’ and he would have followed his instructions to the letter.

“He is tall and strong but he won’t be ready for the pressure that I will bring on June 9,” Seferi said. Two-and-a-half years out of the ring is a long time and nobody knows if he is still the same fighter that dethroned Wladimir Klitschko. I am going to seize this opportunity with both hands.”

What is Seferi talking about? Of course, Fury isn’t the same fighter. There’s no question that he’s not the same fighter that he was three years ago. Nobody would be the same fighter after three years out of the ring and after having lost 150 lbs. of pure sludge. It’s academic that Fury isn’t the same guy that he was 900 yesterdays ago. The only question is how much as Fury lost from his game. I wouldn’t be surprised if Fury is only 60% of the fighter he was back in 2015. With Fury only at 60 percent capacity, Seferi has a real chance of winning this fight.