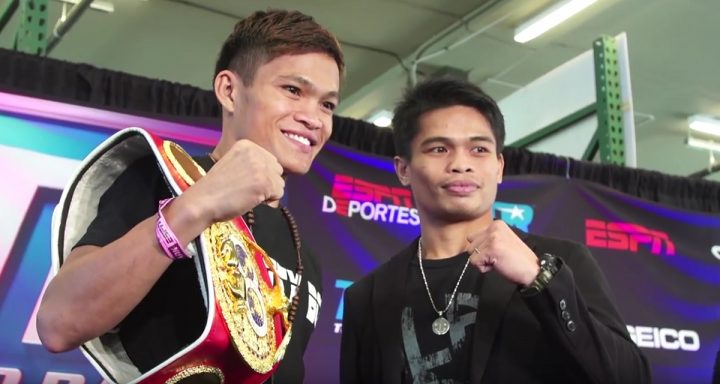 By Chris Williams: The official purses for Saturday night’s fights between Jerwin Ancajas and Jonas Sultan, and Khalid Yafai and David Carmona are out. IBF super flyweight champion Jerwin ‘Pretty Boy’ Ancajas (29-1-1, 20 KOs) will be getting a purse of $75,000 for his title defense against #1 IBF mandatory challenger Jonas Sultan (14-3, 9 KOs).

For his part, Sultan will be receiving $20,000 for his first title challenge of his five-year pro career. In the co-feature, WBA super flyweight champion Kal Yafai (23-0, 14 KOs) will be making $40,000 for his fight against David Carmona (21-5-5, 9 KOs), who failed to make weight on Friday after coming in 3 ½ lbs. over the 115 lb. weight limit. That’s quite a bit of weight for the 27-year-old Carmona to have missed the weight limit.

Carmona’s purse for the fight is $10,000. After his 20% fine for coming in overweigh at the weigh-in, Carmona will be left with $8000 for the Yafai fight. One-half of Carmona’s $2K fine will go to Yafai and the other half to the California State Athletic Commission.

As you can tell, the super flyweights aren’t making a ton of money compared to fighters in the middleweight and heavyweight divisions like Saul Canelo Alvarez, Gennady Golovkin and Anthony Joshua. That might change someday for a select few if big star emerges at 115.

Top Rank is hoping to turn the 26-year-old Filipino Ancajas into a star along the same lines as Manny Pacquiao, but they’ve got a tough road ahead of them in trying to accomplish that task. The southpaw Ancajas is much less of a dynamic fighter as Pacquiao. Even at 39, Pacquiao is more explosive than Ancajas. We’re talking apples and oranges here with these two guys. Ancajas needs to be rebuilt from the ground up to get him to be anywhere close to as dominating as Pacquiao was during his best years. It would be interesting to know how much the promoters of the card are making in comparison to the fighters. The money seems quite low for the considerable talent that these fighters possess. You would think they would be making a lot more than this, right? Fighters in the 115 lb. division aren’t making the big money.

Ancajas vs. Sultan and Yafai vs. Carmona will be televised on ESPN+ from the Save Mart Arena in Fresno, California. The fight card is promoted by Top Rank Boxing. If Ancajas and Yafai win their respective fights, they’re expected to face each other later this year. What remains to be seen is if Top Rank lets Ancajas mix it up with WBC super flyweight champion Srisaket Sor Rungvisai in the future or not. That’s a fight that would be much more interesting than watching Ancajas fight Yafai.

Ancajas has the punching power to win this fight, but he won’t have the quickness and the mobility that Sultan has. The 5’6” Ancajas does have the height advantage over the 5’4” Sultan. When the two fighters stood side by side at Friday’s weigh-in, Ancajas looked giant compared to Sultan. It wasn’t just the height that made Ancajas look so much bigger than Sultan. It was his frame. Ancajas is a bigger all around fighter. By tonight, I expect Ancajas to have filled out to the point where he might have at least a 10 lb. weight advantage going for him against the 26-year-old Sultan. If Ancajas can keep Sultan bottled up on the outside, then he should be able to beat him with jabs and left hand power shots the entire fight. Sultan will need to take some chances if he wants to win this fight.

Ancajas has looked good lately in beating Israel Gonzalez, Jamie Conlan, Teiru Kinoshita, Jose Alfredo Rodriguez and McJoe Arroyo. Conlan looked like he didn’t belong in the same ring with Ancajas. That was a mismatch from the jump. I’m still trying to figure out why Conlan was put in with Ancajas, because he didn’t belong inside the same ring with him. It was too easy for Ancajas in beating him. Ancajas comes into tonight’s fight against Sultan with a 16-fight winning streak going for him.

Sultan has made vast improvements in his own career since losing to Go Onaga in 2015. Sultan has won his last five fights, beating John Riel Casimero, Sonny Boy Jaro, Makazole Tete, Romel Oliveros and Tatsuya Ikemizu.

”At this moment, I don’t really care about it because I have a job to do myself,” Yafai said to ESPN.com about the fight between Ancajas and Sultan in the main event. ”I’m not looking past this fight. After my fight, I’ll obviously watch the [Ancajas vs. Sultan] fight if I’m not too tired. I always concentrate on what I have in front of me. There are plenty of great fighters at 115 pounds. Jonas Sultan is a great fighter, and he can’t be written off on Saturday night. Jerwin is a great fighter also, who I expect to win on Saturday,” Yafai said.

Yafai might not win if he’s not careful. Carmona is going to have the size advantage over him, and as he showed in his past fights against Carlos Cuadras and Naoya Inoue, he’s a very tough customer. Carmona went the distance with Inoue and Cuadras. He gave both of them all kinds of problems. Inoue to knock Carmona out, but he had no luck in taking him out with body shots like he’s done with the other opponents. Yafai is probably not going to have much luck if he attempts to knockout Carmona tonight, because he’s a solid fighter with a good foundation. Yafai struggled in in defeating his WBA mandatory challenger Sho Ishida on October, 2017. Yafai won the fight by a 12 round unanimous decision, but he gave up a lot of rounds. If Ishida was just a little bit better, he would have earned a draw. Carmona is arguably a better fighter than Ishida despite losing 3 out of his last 4 fights, so he has a chance of at least fighting Yafai to a standstill tonight and possibly squeaking out a decision win.

Yafai’s problem is he lacks punching power, and he gets tired around the 6th round in his fights. One major reason for Yafai’s stamina issues likely has to do with his struggles to make the 115lb weight limit. Yafai looks huge after he rehydrates for his fights, and he’s got to be taking off at least 20 lbs. of water weight each. It hasn’t caught up to Yafai completely as of yet, but it will soon. Yafai’s last fight against Ishida showed that he’s already beginning to show signs of the deteriorating effects of losing so much weight to make super flyweight. You can only do that for so long before it catches up to you. Yafai is 28-years-old now and he’s been fighting in the same weight class since 2013 after starting his pro career out at bantamweight. It’s pretty easy to see why Yafai moved down to 115 to fight. He wasn’t dominating at 118 against his lower level opposition, so he likely chose to move down to super flyweight to gain an advantage against the smaller opposition in that weight class. It was a good move for Yafai, because if he had stayed at bantamweight, he would have come undone by the likes of Luis Nery, Ryan Burnett, Zolani Tete and Emmanuel Rodriguez. Yafai is just as big as them, but he chooses to fight at 115.