Pacquiao says rumors of fight with Matthysse being postponed are untrue 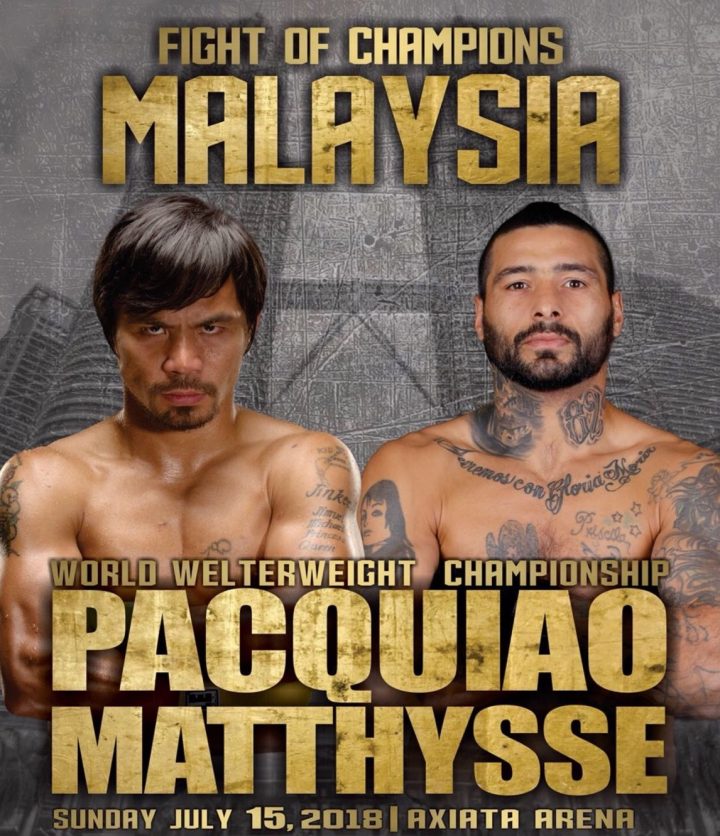 By Chris Williams: Manny Pacquiao has come out of training to deny the rumors that his July 15 fight against WBA World welterweight champion Lucas Matthysse is being postponed are totally untrue, and he believes it’s the work of a “saboteur”.

Pacquiao (59-7-2, 38 KOs) says the fight with Matthysse is still on for the 15th of July at the Axiata Arena in Kuala Lumpur, Malaysia. The fight is supposed to be available on ESPN pay-per-view in the U.S. There’s still no word how much the fight will be sold for on PPV, but it’s possible that it’ll be the regular PPV price that we’ve been seeing in the U.S for boxing matches.

The rumor of the Pacquiao-Matthysse fight being postponed started up overnight on Friday evening and it quickly spread.

“That is malicious and untrue,” said Pacquiao via Fight News about his fight with Matthysse (39-4, 36 KOs).

Pacquiao wants to think the person that started the rumors of the postponement because he believes it will help make his fight with Matthysse more of a success by creating more interest in the fight. Unfortunately, I think that’s wishful thinking for Pacquiao. It’s not likely going to create more interest from boxing fans. It’s likely to do the opposite by making people concerned that the promotion of the event is shaky. Already things are different with this fight than in Pacquiao’s previous fights. Freddie Roach is no longer training Pacquiao. He’s been replaced by Buboy Fernandez, who has been working as an assistant trainer for Pacquiao for ages now.

Additionally, Pacquiao’s promotional company is taking the lead in the promotions. Things are really different from Pacquiao’s previous fights. He’s coming off of a loss to Jeff Horn from last July. It’ll have been exactly 1 year since Pacquiao last fought by the time he enters the ring against Matthysse on July 15. Considering that Pacquiao looked shot to pieces I the Horn fight in terms of his physical skills, you would have to believe that being out of the ring for an entire year will not have helped the 39-year-old Pacquiao’s physical skills. Unless Pacquiao has been drinking from Ponce De Leon’s Fountain of Youth, he’s probably not going to be better than he was last year, and he was pretty bad off then.

“Ironically, I would like to thank these rumor-mongers for the extra publicity that they are contributing to make this fight such a huge success. I am turning this negative news into something good because no news is actually bad news,” said Pacquiao.

If Pacquiao gets knocked out by Matthysse on July 15, it might not have been a bad thing if the fight were to have been postponed. Matthysse is a man on a mission, looking to send Pacquiao into retirement. If Matthysse knocks Pacquiao out, it’s hard to imagine the soon to be 40-year-old Filipino star continuing his sagging career. It would be his second straight loss.

Canelo vs. Golovkin II likely back at T-Mobile Arena in Las Vegas in Sept. »