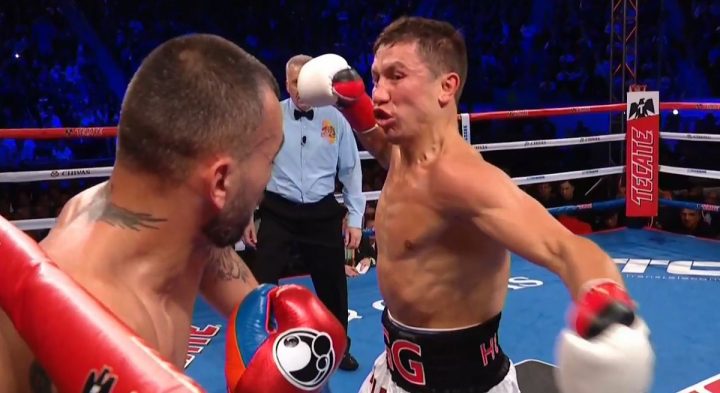 By Jim Dower: Tom Loeffler is reportedly saying that middleweight champion Gennady Golovkin (38-0-1, 34 KOs) has appealed the terms for the IBF exception, which state that he must defend against his IBF mandatory challenger Sergiy Derevyanchenko (12-0, 10 KOs) by August 3 at the latest for him to keep his IBF 160lb. title.

Loeffler appealed to the International Boxing Federation previously for them to allow Golovkin to make a voluntary defense against inactive junior middleweight contender Vanes Martirosyan (36-4-1, 21 KOs) last Saturday night on May 5. The IBF wanted Golovkin to defend against his IBF mandatory Derevyanchenko on that date after his previously scheduled opponent Saul Canelo Alvarez dropped out of the fight.

The IBF was on board with Golovkin fighting Canelo, as he was the WBC mandatory. The sanctioning bodies take turns with ordering mandatory defenses for the champions. Once Canelo was out of the picture, it the IBF that was ready to have their mandatory Derevyanchenko fight Golovkin.

Loeffler didn’t want GGG to take the fight with Derevyanchenko on just 3 weeks’ notice though, so he asked for the IBF to make an exception so that he could fight Martirosyan instead. The IBF granted the exception but with the requirement that GGG face Derevyanchenko by August 3, which is just one month before the proposed date for the Canelo-GGG II rematch on September 15.

It’s not likely that the IBF will grant Golovkin a second exception to bypass the Derevyanchenko fight unless he faces WBO middleweight champion Billy Joe Saunders. The sanctioning bodies tend to let the unification fights go ahead of mandatory defenses. So, if Golovkin faces Saunders in the summer or in September, then he’ll likely be given an exception to bypass this IBF mandatory Derevyanchenko.

However, that’s probably not the fight that Loeffler wants to make next. I think he wants to make the Canelo fight. That’s a money fight for GGG. I think he’d rather take the fight next instead of a risky mach against Derevyanchenko, which could prove to be a grueling affair.

Golovkin has three months before he need to defend against Derevyanchenko on the IBF deadline of August 3. There’s plenty of time for Golovkin to get ready for that fight. If GGG can beat Derevyanchenko as easily as he did Martirosyan, then it’s not going to be a big deal to get back inside the ring to face Canelo a month later on September 15.

Golovkin stopped Martirosyan in the 2nd round last Saturday night on HBO World Championship Boxing at the StubHub Center in Carson, California. The fight was a stay busy fight for Golovkin, who had been out of the ring for 8 months waiting for Canelo to face him in a rematch.


« Andre Ward comments on Tony Bellew calling him out