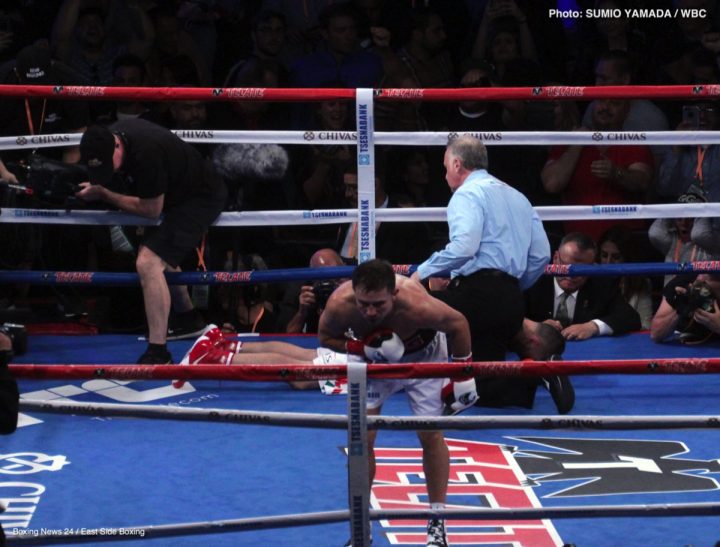 By Dan Ambrose: HBO commentator Jim Lampley thinks middleweight champion Gennady Golovkin (38-0-1, 34 KOs) is a better fighter when he fights in an all-out brawling style where he makes himself vulnerable to land his big power shots.

Before Golovkin’s impressive second round knockout of Vanes Martirosyan (36-4-1, 21 KOs), he had fought in a conservative manner in his two previous fights against Saul Canelo Alvarez and Daniel Jacobs and he had struggled.

Golovkin went back to his brawling style against Martirosyan and he took him apart in 2 rounds. Golovkin was hit with some good shots from Martirosyan in the 1st round, but he seemed to get motivated by that and he came out on fire in the 2nd round. Martirosyan never had a chance against Golovkin once he started fighting in his old school brawling style that had made him famous.

“Golovkin’s got to get loose and be reckless. That’s what he did. When he’s reckless he’s unstoppable,” Lampley said to Fighthub.

Golovkin is a much better fighter when he’s opening up on his opponents with power shots from start to finish compared to when he’s trying to box them, as he did in his fights against Saul Canelo Alvarez and Daniel Jacobs. Golovkin gave away his strengths against those two fighters and basically fought their fight.

“Golovkin looked good as usual but you’re fighting a kid [Martirosyan] that’s been off for 23 months so, of course, you better look good against him or you’re going to have problems,” Roy Jones Jr. said to Fighthub.

In fairness to Golovkin, he would have given Martirosyan problems even if he’d been fighting three times a year for the last two years. Golovkin was always going to be a nightmare for a fighter like Martirosyan, who’s basic DNA is that of a slugger.

Martirosyan can box a little, but he’s always been a puncher first and foremost during his amateur and pro career. The shots that Golovkin hurt Martirosyan with last Saturday night at the StubHub Center in Carson, California are the same punches that would have given him problems two years ago. Golovkin could have made the Martirosyan fight a hard one for him if he’d made the mistake of trying to box him for 12 rounds like he foolishly did against Canelo and Jacobs.

Golovkin gave those guys too much respect by boxing them rather than plowing through them the way he should have. There was no excuse for Golovkin not going after Jacobs immediately to knock him out because Dmitry Pirog, a fighter with less power than GGG, had given Jacobs zero respect in hunting him down and knocking him out in 5 rounds in 2010. The blueprint was there for Golovkin to follow for the Jacobs fight, but he instead fought like he was afraid of him for 12 rounds.

Golovkin seemed to be focusing on what Jacobs had done to Peter Quillin and Sergio Mora in knocking them out quickly. Golovkin failed to see that Jacobs was fighting guys with chin problems. When Jacobs has fought guys with good punch resistance like Ishe Smith and Caleb Truax, he had been forced to go deep into the fights. Smith, who isn’t known as a puncher, even staggered Jacobs in their fight in 2009. After that fight, Jacobs’ stock dropped. That’s when the boxing public started to see for the first time that Jacobs has a chin problem.

Golovkin should have followed Pirog’s blueprint by going after Jacobs, but he failed to do so. He stood on the outside and boxed him for 12 rounds. Golovkin did the same thing against Canelo Alvarez in staying at range and boxing him. Golovkin gave the Nevada State Atheltic Commission assigned judges the opportunity to score his fight with Canelo, and the results were they gave him a draw in a fight that should have been arguably an easy win for him. Floyd Mayweather Jr. had done the same thing in boxing Canelo for 12 rounds, but he was more popular fighter and the judges gave him the decision. Even in the Mayweather-Canelo fight, one judge had it scored a draw.

Golovkin should have seen that and realize that you don’t try and beat a popular fighter like Canelo by a decision. You must knock him down three or four times if you’re planning on beating him by a decision. Ideally, Golovkin needed to knock Canelo out for him to have taken the judges out of the equation entirely, but he didn’t do that.

Golovkin didn’t even try to knock Caneo out, and it hurt him in the end with the judges scoring it a 12 round draw. It doesn’t matter that the judges have been lampooned since then for their horrible scoring of the fight. The fight is still a draw, and Golovkin now has to waste his time fighting Canelo again, likely with a similar purse split of the revenue as the first fight.

“Of course he should have fought [Derevyanchenko] but at the same time, smart-wise, you don’t want to fight Derevyanchenko because he’s the guy who’s going to challenge you,” Jones Jr. said about Golovkin’s IBF mandatory challenger Sergey Derevyanchenko (12-0, 10 KOs) that he had steered around to take the fight with Martirosyan last Saturday night. ”And you trying to get a Canelo fight! So you don’t want to mess up your payday so that’s probably why he didn’t.”

For the sake of sports, Golovkin should have fought Derevyanchenko last Saturday night after Canelo dropped out of the fight, leaving him and his promoter Tom Loeffler having to scratch up a replacement opponent on short notice. But there aren’t too many fighters at Golovkin’s level that are going to take a tough opponent on 3 weeks’ notice like that.

“Yeah. More than likely,” Jones Jr. said when asked if he believes Canelo Alvarez will be next for GGG in September. 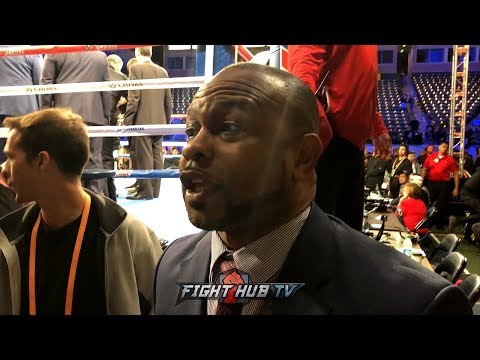 Jarrell Miller on AJ: ‘I could beat the brakes off him’ »