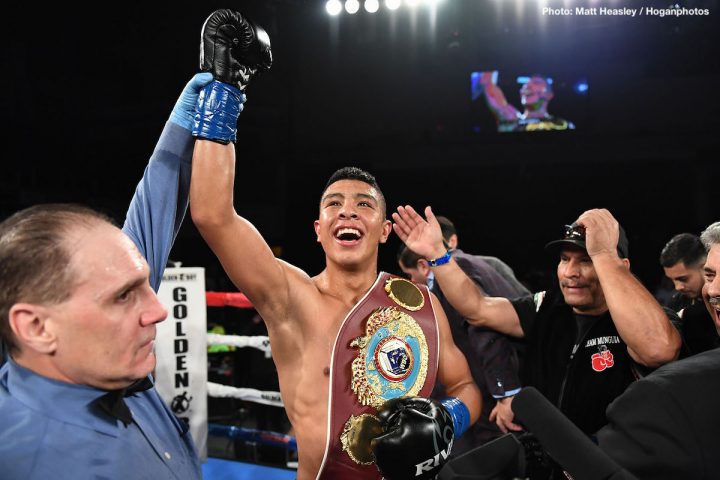 Munguia, 21, knocked the much smaller 5’9” Ali down 4 times in the fight before it was halted in the 4th round. The official time of the stoppage was at 1:02 of round 4.

Munguia had come into the fight having fought 5 of his last 8 fights at middleweight. Ali is a natural welterweight, and he was never going to be able to stand and trade with the 6’1” Munguia, who looked every bit as big as a true middleweight. This was like George Foreman vs. Joe Frazier. Ali was too small to be competitive.

Munguia needs to be fighting guys his own size. Obviously, he’s going to keep draining down to 154 for as long as he can, because the WBO 154lb champion right now. I don’t see Munguia holding onto his belt for long. If he faces a good junior middleweight with skills and power, he’ll lose his belt.

Ali never recovered from being knocked down twice in round 1. Ali was hurt from a left from Munguia, and he was fighting like he buzzed for the next three rounds before the fight was halted.

Both fighters are with Golden Boy Promotions. Munguia was offered by Golden Boy as a replacement for Saul Canelo Alvarez to fight IBF/IBO/WBA/WBC middleweight champion Gennady Golovkin last Saturday night on May 5, but the California State Athletic Commission wouldn’t sanction the fight due to Munguia’s inexperience world class level opposition and the fact that he has never fought at 160 before. It’s a good thing Munguia didn’t get that fight, because he would have been torn apart by Golovkin.

It wouldn’t have been a fight. It would have like tonight, except Munguia would have been playing the part of Sadam Ali and Golovkin would have been taking his role. Munguia is too slow and hittable to stand up to a guy like Golovkin any of the talented 154lb fighters. I’m talking about real juinior middleweights, not Sadam Ali, who clearly didn’t belong at junior middleweight and should have moved back down in weight after he got lucky against the injured Miguel Cotto last December.

Munguia knocked the 29-year-old Ali down two times in round 2, one time in round 2, and once in round 4. There was a missed call for a knockdown of Ali in round 3, otherwise there would have been 5 knockdowns in this horribly one-sided fight.

Before anyone gets too excited about Munguia and starts thinking he’s the best fighter in the 154 lb. division. He’s clearly not. This was a case of Munguia, a fighter that is a true junior middleweight, fighting a guy that moved up from welterweight to face the over-the-hill and injured Miguel Cotto last December. The only reason Ali beat Cotto by a 12 round unanimous decision in that fight was because Cotto tore his left biceps in round 6 and was fighting one-handed from that point on.

Ali was losing handily up to the point where Cotto suffered the injury. Munguia would stand no chance against the good fighters in the 154lb division like Jarrett Hurd, Jermell Charlo and Erislandy Lara. Munguia is just a big, VERY slow guy, who is easy to hit, but who can overpower welterweights or mediocre junior middleweights. Munguia reminds me of Alfredo Angulo when he was fighting at 154.

When Angulo was at junior middleweight, he was decent fighter, who used his heavy hands to beat a lot of B and C-level fighters. It was when Angulo had to fight the better guys that he fell apart. Munguia is going to have the same thing happen to him. He’s too slow, too easy to hit, and too average. But if you put Munguia in with a welterweight with no punching power, a bad chin and less than blazing hand speed like Sadam Ali, he’s going to chop him apart. It would have been the same thing if Ali had faced his originally scheduled opponent Liam Smith tonight. That guy would have torn him apart even worse than Munguia, because he has boxing skills and talent.

They have weight classes for a reason. Munguia was way too big for Ali, and it was apparent as soon as he walked into the ring tonight. You could tell that Ali was going to be in real trouble, because he looked like a fat welterweight and not a junior middleweight like Munguia.

Ali had put on weight and weighed in as a junior middleweight, but he looked chunky and not like a real junior middleweight. From the jump, the only chance Ali had of winning this fight was for him to be smart and out-box Munguia. But instead of being smart early, Ali tried to slug with Munguia and he was hurt right away. It was all downhill from that point. Ali fought a stupid fight, and he paid for it. He should have known that he was going to get chopped apart by Munguia.

Ali was asked after the fight whether he’ll be moving back down to welterweight, and his response was, “I don’t know.” Ali has no business fighting at 154. For his sake, he should not only move down in weight, but he should skip the 147 lb. division and go to 140, because he has no chance of beating any of the champions at welterweight. He doesn’t have enough talent or a good enough chin.

Jessie Vargas knocked Ali out in the 9th round in 2016 at welterweight. That tells you all you need to know about Ali at welterweight. Vargas isn’t a big puncher, and yet he was able to knockout Ali. That fight should have told Ali that he needed to lose weight and drop down to 140, because he can’t take shots from fighters at welterweight.