Gomez: If GGG and Loeffler are bluffing, it’s not going to work 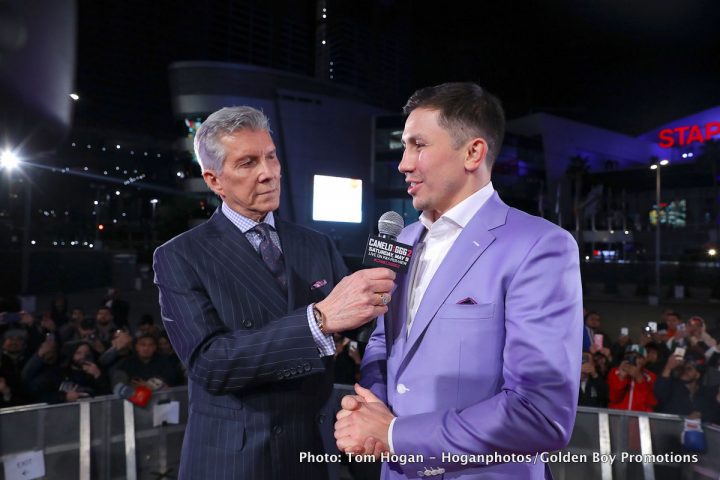 By Dan Ambrose: Saul Canelo Alvarez’s promoter Eric Gomez says the deal for the rematch against Gennady Golovkin is dead after receiving a counteroffer from his promoter Tom Loeffler for an unstated split that he finds unacceptable. Gomez isn’t saying what kind of purse split that Golovkin is asking for to defend against Canelo Alvarez (49-1-2, 34 KOs) for September 15, but Loeffler has already spilled the beans to the media in saying that GGG wants a 50-50 equal split of the money for the second fight.

As far as Gomez is concerned, that’s entirely unacceptable and not what they’re willing to give the 36-year-old Golovkin (38-0-1, 34 KOs).

Whether Golovkin deserves to get a 50-50 purse split or not with Canelo, the fact is that’s what he wants. If Canelo doesn’t give him that, then he can move on like Gomez is saying and take his chances against some of the other fierce lions in the division – Jermall Charlo, Sergey Derevyanchenko, Daniel Jacobs and Billy Joe Saunders – if he’s willing to fight them.

Golovkin is arguably better equipped to fight at middleweight than Canelo is. Canelo is a fish out of water at 160. He’s like how David Lemieux will be when he moves up to 168. He’ll be too short to beat the taller fighters. The same applies to Canelo. He clearly lost to Golovkin last September but was given a draw by the Nevada judges. If Canelo doesn’t want to give Golovkin his asking price, then he’s going to have to take his chances fighting the other talented middleweights for what will be less money.

Gomez says that Golovkin and Loeffler had agreed to the terms as of late April, and part of the terms of compensation for GGG having missed out on the May 5 fight because of Canelo testing positive and pulling out of the rematch on that date. For that reason, Gomez was surprised to receive the counteroffer asking for a larger percentage that what they’d agreed on. The agreed upon term was reportedly a 65-35 split, which was a 5% increase for Golovkin from the 70-30 split he received for the September 16 fight last year against Canelo. GGG likely has some very good reasons why he should get a 50-50 deal if he wanted to give a full break down. Golovkin says he feels he deserves a 50-50 split because he’s the champion, and he gave Canelo a lot of concessions for the first fight last year, as well as for the May 5th rematch. Golovkin now wants Canelo to give concessions by giving him a 50-50 deal.

”If they’re bluffing, it’s not going to work. We’re not going to go for it,” Gomez said to the latimes.com about Golovkin and Loeffler in talking about their counteroffer. ”As of right now, it’s off. “I’m hoping we can still make the fight, but [Thursday] felt like a deal killer.”

Gomez acts if Golovkin is the only one that loses in this situation. More than anyone, Canelo loses, because he’s now going to be expected to fight the other top middleweights in the division, and there are major question marks whether he has the size, talent and stamina to beat them. Gomez and Golden Boy Promotions CEO Oscar De La Hoya are mentioning Daniel Jacobs and Billy Joe Saunders about a fight against Canelo.

De La Hoya originally threw in Jermall Charlo’s name as one of the possible opponents for Canelo to fight on September 15, but he’s no longer being mentioned. It’s possible that Charlo is being excluded because he’s arguably more dangerous than Jacobs and Saunders, but it’s also possible that perhaps some other reason. He’s with Al Haymon. It’s unclear whether Golden Boy would want to make a fight between Charlo and Canelo due to Jermall being with Haymon. If that’s the case, then Canelo will have an excuse for never having to face Charlo. That’s a negative, because Jacobs is getting up there in age, and Saunders can’t punch and he’s not the same kind of fighter. If one of these days Charlo is the last man standing, does Canelo fight him then or does he stay in his own lane? De La Hoya has brought up Gary ‘Spike’ O’Sullivan as one of the possibilities for Canelo to fight on September 15, and he’s the one that a lot of hardcore boxing fans believe he’ll fight.

Golovkin has these things going for him:

• Golovki is considered the winner of the first fight

Canelo is the A-side still in the negotiations for a rematch with GGG, but he has a lot of things going against him now with the positive tests for clenbuterol, his draw and the fact that he’s been suspended for six months by the Nevada State Athletic Commission. Canelo has never proven himself as a top middleweight by beating any of the quality middleweights in the division. His draw with Golovkin was controversial, with many boxing fans believing he deserved a loss by a 116-112 score.

Canelo is still the bigger pay-per-view attraction than Golovkin, but he only brings in big ratings when he fights guys that help him, like GGG, Floyd Mayweather Jr., Amir Khan, Miguel Cotto and Julio Cesar Chavez Jr. If Golovkin had fought Mayweather, Cotto, Chavez Jr. [last year] and Khan, he would have brought in good PPV numbers as well. The difference is those fighters were willing to fight Canelo, and they’re willing to fight Golovkin. Mayweather, Cotto, Khan and Chavez Jr. have never shown a great desire to fight Golovkin. Sure, Chavez Jr. talks about wanting to fight him, but when push came to shove, he didn’t fight him when he had the opportunity to a few years ago. If Canelo doesn’t fight a good opponent on the Mexican Independence Day holiday on September 15, he’s not going to bring in huge PPV numbers on HBO. The fans aren’t going to go crazy if Canelo fights Gary ‘Spike’ O’Sullivan or Billy Joe Saunders. Those fights are lackluster, similar to Canelo’s September 2016 contest against former WBO junior middleweight champion Liam Smith at AT&T Stadium in Arlington, Texas. That fight brought in only 300,000 buys. I’m not sure Canelo could do even that now fighting the likes of Saunders and O’Sullivan.

“And if he loses to Canelo, he might retire,” Gomez said about Golovkin. ”So, what’s he going to do? He’s going to fight a bunch of guys like Vanes and ride off into the sunset.”

Canelo could be facing the scenario more so than Golovkin, because the 5’8” Mexican is too short for the middleweight division. We saw that when Canelo was being jabbed to pieces by Golovkin from the outside. With quality judging on the night, Golovkin would have won a one-sided 12 decision in the same way the 5’8” Floyd Mayweather Jr. did in 2013 in beating Canelo. Canelo is helpless when his longer-armed and taller opponents jab him from the outside. Golovkin wasn’t content to just jab though, and that’s how Canelo was able to hit him with counters when he would throw his power shots. If Golovkin had just followed after Canelo along the ropes and continued to jab him, there would have been no discussion who won the fight. The judges couldn’t give Canelo round if he was unable to counter Golovkin.

If Golovkin loses to Canelo, he’ll try to get a rematch against him. If Canelo refuses, then Golovkin will fight someone like Saunders or try and/or focus on working his way to a mandatory spot to force a rematch against Canelo. I don’t think Golovkin will retire unless he’s feeling like he’s lost too much of his game to continue on. For Golovkin to retire, he’ll need to be soundly beaten by Canelo, Jacobs, Charlo or Saunders. The way Canelo fought last time, his chances of beating Golovkin at all are very slim, but if he does defeat him without controversy, then it’s likely going to be a close fight.

Gomez is upset that Golovkin and Loeffler changed their minds by accepting the 65/35 split that they had previously agreed on. Golovkin obviously has been stewing on what he’s been put through by Canelo with him making him weight eight months for the rematch in May of 2018 instead of fighting him last December, and the two positive tests for clenbuterol didn’t help. Golovkin is now looking at losing his IBF belt because his mandatory is due against Sergey Derevyanchenko. It wasn’t easy for Golovkin to accumulate the belts, and he doesn’t to lose them because his opponent is eating tainted beef in Mexico.

Boxing » Canelo Alvarez » Gomez: If GGG and Loeffler are bluffing, it’s not going to work