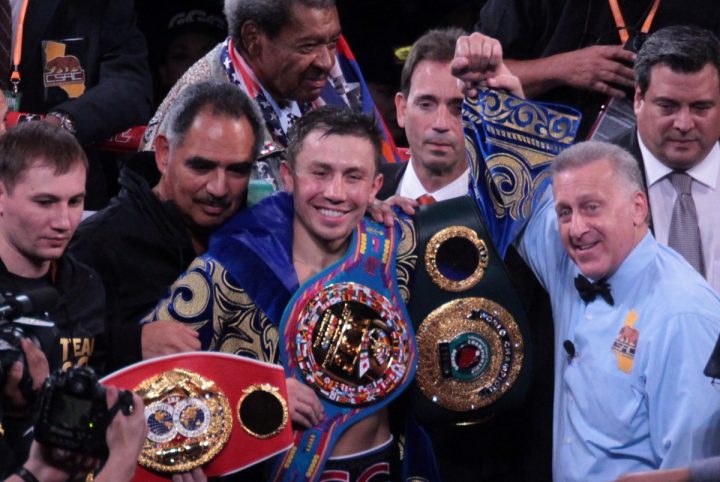 By Dan Ambrose: Tom Loeffler will be meeting with the International Boxing Federation on Monday to speak with them about IBF middleweight champion Gennady ‘GGG’ Golovkin’s mandatory challenger Sergiy Derevyanchenko (12-0, 10 KOs).

The IBF recently set a deadline of early August on the 3rd for when Golovkin is expected to defend his IBF title against the unbeaten Derevyanchenko. Loeffler wants to get an exception to permit GGG to face Saul Canelo Alvarez, his WBC mandatory, on September 15. If Loeffler is unable to get an exception from the IBF, then Triple G could be stripped of his title unless he faces Derevyanchenko.

It’s a tough situation Golovkin (38-0-1, 34 KOs) is in with Derevyanchenko being the mandatory. Golovkin and Loeffler want to take the rematch with Canelo a month later on September 15, and there’s no way that GGG can take both fights back to back with only one month separating the two fights. There’s no enough time for Golovkin to fight Derevyanchenko in a low money fight and then follow that with the big revenue-generating rematch against Canelo Alvarez (49-1-2, 34 KOs) on September 15.

If the IBF chooses not to grant Golovkin his exception to put off the Derevyanchenko fight until later, then it’ll force GGG to vacate his IBF 160lb belt. That’s the likely move Golovkin would take. It’s not realistic for Golovkin to take the smaller payday against Derevyanchenko instead of the higher paying rematch against Canelo in September.

Losing the IBF middleweight title won’t be a great loss for the 36-year-old Golovkin, because getting a fight against whoever wins the title won’t be a problem. Golovkin and Canelo are the two most popular fighters at 160. Canelo doesn’t care about the IBF belt, so he’s not going to go after the belt in a fight against Derevyanchenko. Canelo gains nothing by fighting for the IBF title other than having to deal with a headache like Derevyanchenko.

If the IBF belt is stripped from GGG or vacated, then Derevyanchenko will face the highest ranked available contender in the IBF’s top 15. That’ll probably be #4 IBF Demetrius Andrade (25-0, 16 KOs). Derevyanchenko vs. Andrade is a good fight. It’s hard to pick a winner for that fight, because both guys are Olympians and both can box. Derevyanchenko won’t be able to get away boxing the 6’1” Andrade from the outside like he did his last two opponents Dashon Johnson and Tureano Johnson. Both of those guys don’t have reach that Andrade possesses. Derevyanchenko will have to slug with Andrade for him to have a chance of beating him because he’ll be picked apart if he stays on the outside. Andrade is a bad match-up for the 5’9” Andrade, who would be giving away 6” inches in reach to Andrade, and he’d have to deal with his southpaw stance.

NEWS:   Chris Eubank Jr. vs. Gennadiy Golovkin possible for May 2022

Golovkin will have a chance to scoop up the IBF belt easily if it’s stripped from him. Golovkin would likely need to devote 2019 to winning the IBF title and the WBO belts rather than looking for third match against Canelo.

Hearn says Brook vs. Khan fight could take place in 2019 »