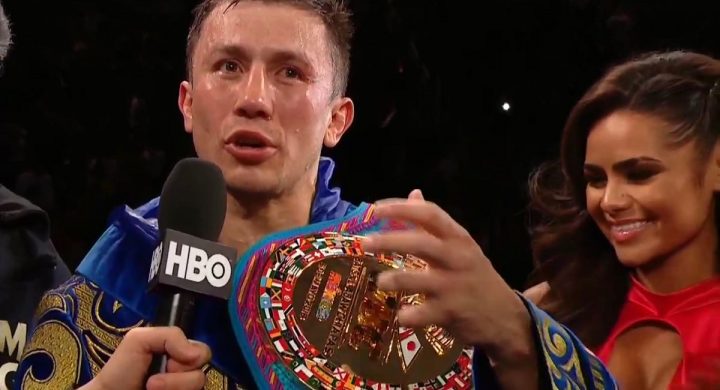 Golovkin could now break the record against Saul Canelo Alvarez in September or possibly sooner if he chooses to get back into the ring this summer to defend his IBF, IBO, WBA and WBC middleweight titles.

Hopkins’ record of 20 title defenses has stood since 2005, and it was thought that it would never be broken by some boxing fans.

Golovkin (38-0-1, 34 KOs) says he never set out to break the record. It was just something that just happened with him being durable, ad winning his fights one after another. Golovkin came close to losing to Canelo Alvarez last September due to him fighting in the Mexican star’s favorite venue in Las Vegas, Nevada. Golovkin was held to a draw in that fight, and he was lucky not to have lost, even though he appeared to win by 4 to 6 rounds.

With voluntary challenger Martirosyan now out of the way, Golovkin’s promoter Tom Loeffler wants to put the Canelo-GGG rematch together for September 15 on the Mexican Independence Day holiday on HBO PPV. However, if Loeffler does put the fight together, it will mean that GGG won’t likely be allowed to fight until September, because Golden Boy isn’t going to want to take the risk of Triple G losing, looking bad or getting injured before he faces their star Canelo.

It might be better for Loeffler to wait for Golovkin to get a fight out of the way in the summer before he looks to put together a fight between him and Canelo. However, Loeffler wants Golovkin to fight 3 times in 2018. If Golovkin fights Canelo in September and then against someone like WBA ‘regular’ middleweight champion Ryota Murata or WBO 160lb champion Billy Joe Saunders in December, then he’ll have fought three times this year.

“For Golovkin to tie this record, we thought it would never be broken,” GGG’s promoter Tom Loeffler said. “The rematch with Canelo is the biggest fight in boxing. We will be in contact with Golden Boy.”

Hopkins set the record of 20 successful title defenses without taking any really risky fights during his 10-year reign as a middleweight champion. During Hopkins’ time as the champion at 160, his toughest fights were against Felix Trinidad, Oscar De La Hoya, John David Jackson, Glen Johnson, Robert Allen, Syd Vanderpool, William Joppy and Howard Eastman. Trinidad and De La Hoya were welterweights. Hopkins’ title defense streak ended when he fought Jermain Taylor on July 16, 1995. Hopkins gave it his best shot, but the combination of speed, power, boxing skills and overall athleticism of Taylor was too much. It wasn’t a youth thing. Taylor was simply a better fighter than Hopkins.

“We’re proud of this accomplishment to tie a record with this performance. These 20 defenses have been against different opponents,” Golovkin’s trainer Abel Sanchez said.

Sanchez is hoping that Golovkin can keep that streak going and break the record for title defenses. Canelo would be a good choice for GGG to fight if Loeffler doesn’t want to bring him back in the summer. Realistically, Golovkin could fight four times in 2018. Golovkin’s fight with Martirosyan lasted just 2 rounds, and he was barely him after the 1st round.

Golovkin could fight in July if he wishes in order to fulfill the International Boxing Federation’s instructions that he must defend against mandatory Sergey Derevyanchenko (12-0, 10 KOs) by August 3 if he wants to keep his title. July would be the best time for Golovkin to fight Derevyanchenko. However, it’s quite likely that the Ukrainian fighter’s promoter Lou Dibella will try and draw out the negotiations in a way of forcing Golovkin’s hand to vacate the title. If Golovkin has to deal with months of negotiations for a title defense against Derevyanchenko, then it will make it impossible for him to fight Canelo in September.

“I’m ready to fight him (Canelo). Of course, Canelo is my priority but I will fight anyone,” said Golovkin.


« Martirosyan says Canelo should “RUN” from Golovkin in rematch

Andre Ward comments on Tony Bellew calling him out »