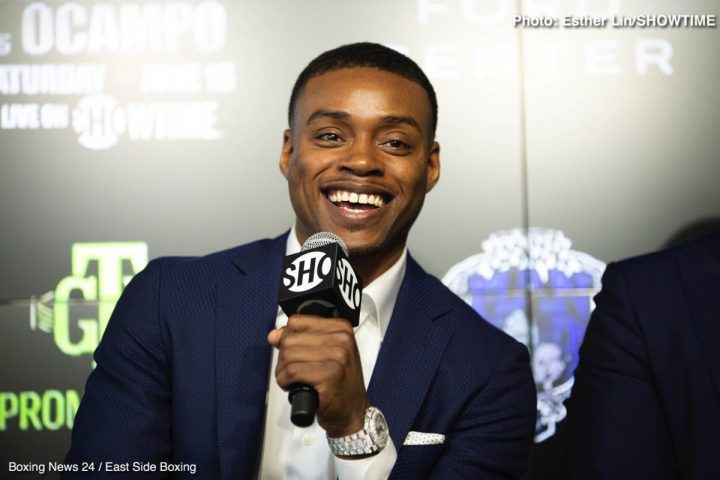 By Jeff Aranow: IBF welterweight champion Errol Spence Jr. says he’s been told that he’ll be fighting the winner of the Danny Garcia vs. Shawn Porter fight in a unification match for the WBC and his IBF 147lb. title. Spence Jr. (23-0, 20 KOs) says he’s supposed to get it, from what he’s been told.

Garcia-Porter still doesn’t have a date for when that fight is supposed to take place, but it’s looking like it’s going to be in the summer months for the vacant World Boxing Council 147 lb. title. Garcia (34-1, 20 KOs) and Porter (28-2-1, 17 KOs) were both waiting for the injured Keith ‘One Time’ Thurman (28-0, 22 KOs) to defend his WBA/WBC titles against them, but after he was injured recently in suffering a hand problem, he suddenly vacated his WBC title.

Some believe that Thurman was forced to vacate by the WBC. The WBC title is now going to be fought for by Garcia and Porter.

As reluctant as Garcia and Porter have been to fight Spence, it’s hard to imagine either of them saying yes to a fight with him. It’s easy for Spence to say that he’s been “assured” of a fight against the winner of the Garcia-Porter fight, but I don’t think he sees the situation for what it really is. Garcia’s dad Angel Garcia and Porter’s father Kenny Porter are likely not going to want to put them in with Spence and have to worry about getting beaten up by him.

It’s good news that Spence will get the winner of the Garcia vs. Porter fight. It likely that it was Spence’s manager Al Haymon that let him know that he’ll get a shot at the winner of the Garcia-Porter fight. That’s good for Spence if this turns out to be true, because this will be his first tough fight since his big win over Kell Brook last May in Sheffield, England.

The 28-year-old Spence has yet to capitalize on capturing the IBF title. It took Spence eight months before he made his first defense of his IBF title against Lamont Peterson on January 20th. Spence stopped Peterson in the 7th round in a one-sided fight. Spence is now defending his IBF title against mandatory challenger Carlos Ocampo (22-0, 13 KOs) on June 16 at The Ford Center at The Star in Frisco, Texas. Spence-Ocampo will be televised on Showtime Championship Boxing.

Hopefully, Garcia and Porter are willing to go along with the program and fight Spence. If they say no to a fight with Spence, he’ll be limited to fighting the winner of the Jeff Horn vs. Terence Crawford fight. Even with that, it’s likely that Top Rank promoter Bob Arum will take his time in letting either of those fighters’ face Spence. If there are no fights available against those guys, then Spence will have no other choice but to move up to 154 to seek out greener pastures in fights against the likes of Jarett Hurd, Jaime Munguia and Jermell Chalro.

It’s doubtful Spence will fight Charlo, because they spar and their good friends. Spence can go after Munguia and Hurd if the two of them are able to continue to make weight at 154 for the next year. Munguia is the type to fight anybody, as is Hurd. Those guys are both middleweights in size. They would make it tough for Spence because of their weight more so than their boxing skills.

Kell Brook has been asking Spence to move up to 154 to fight him, so he’s a definite option for him when he does move up to junior middleweight. Brook needs a big name, and Spence would be perfect. If Spence moves up in weight to 154, he can call Brook’s bluff to see if he’s for real or not. It won’t be surprising if Brook turns down the fight with Spence. Brook seems to be more about just trying to get a fight against Khan right now than he is in trying to fight the better fighters at 154. It would be a bad career move for Brook to fight a rematch with Spence and wind up losing a second time.