Deontay Wilder wants to move down to cruiserweight to unify belts 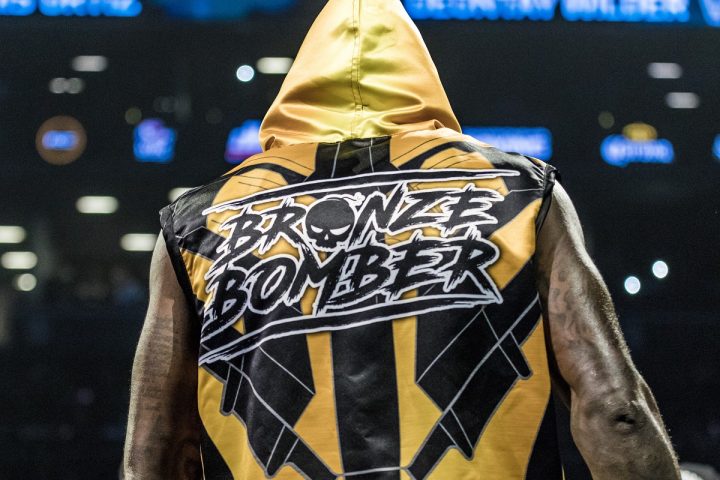 By Scott Gilfoid: Heavyweight world champion Deontay Wilder says he’s thinking of making a move down in weight to the cruiserweight division to unify all the titles after he’s captured all the belts. The unbeaten WBC champion Wilder (40-0, 39 KOs) only needs to defeat IBF/WBA/WBO heavyweight champion Anthony Joshua to have all four of the titles in his possession.

That’s a fight that could take place as early as December, as long as Joshua (21-0, 20 KOs) and his promoter Eddie Hearn of Matchroom Boxing are willing to make the fight.

“I’ve been thinking, once I unify the heavyweight division, I’m moving down to the cruiserweight division and taking over that division,” Wilder said to Fighhype.

It would almost be unfair for the huge punching Wilder to compete against cruiserweights. That division has shorter fighters, who basically weigh the same as Wilder, but they lack the height, reach and one-punch power that he possesses. 6’3” is considered tall for the cruiserweight division, which is why guys like Oleksandr Usyk do wel in that weight class. Usyk uses his height and reach advantage over the shorter cruiserweights to beat them. Usyk would have a ton of problems against the towering Wilder. I think it might be a dreadful mismatch.

Wilder recently said that he wants a ‘body’ to add to his resume. If Wilder moves down to cruiserweight, he could hurt somebody in that division, because his power would be even more devastating in that weight class. Wilder wouldn’t be weakened in going down to cruiserweight, because he’s now below 220 for his fights. In terms of weight, Wilder is perfect for the cruiserweight division. That’s the division that Wilder should be fighting at rather than heavyweight. The reason Wilder can get away with fighting in the heavyweight division is because his 6’7” height, reach and his huge right hand power. Wilder is like the Thomas ‘Hitman’ Hearns of the heavyweight division. Once Wilder defeats Joshua, there will be nobody else for him to fight. It’s pointless for Wilder to face Tyson Fury, because his career is likely going to be heading downhill once he starts facing quality fighters. Wilder’s only competition at heavyweight is the stamina-plagued Joshua, who is no longer looking like the fighter he once was due to muscle growth.

Wilder’s weight has been steadily dropping for his last three fights, and it’s unclear whether he’ll weigh enough at some point to compete at the highest levels of the division. In Wilder’s last fight, he weighed just 214 pounds for his title defense against previously unbeaten Luis ‘King Kong’ Ortiz (28-1, 24 KOs) on March 3. Wilder was hurt in the 7th by Ortiz, but he was able to make it out of the round and eventually stop the Cuban talent in the 10th. In Wilder’s two previous fights before that, he weighed 220 lbs. against Bermane Stiverne last November and 222lbs in defending against Gerald Washington last year in February.

Anthony Joshua’s weights are as follows in his last four fights:

Joshua started his pro career a 230lbs in 2013, and he’s steadily been adding muscle weight, but that’s because he’s been hitting the iron. Adding all the muscle has slowed Joshua’s speed and movements in the ring. It’s also hurt his stamina, which has looked poor since his fight against Dillian Whyte in 2015. Joshua didn’t gas out in his last fight against former WBO heavyweight champion Joseph Parker last October, but that was a strange fight in which the referee seemed to slow the pace of the fight by preventing inside fighting. Joshua would have likely faded in that fight like he did against Klitschko, Takam and Whyte if there had been a different referee working the match.

I’m wondering where former WBC cruiserweight champion Tony Bellew is? He should now be excited at fighting Wilder with him talking about moving down to cruiserweight. As it is, Bellew and Wilder already weigh practically the same. Wilder weighed 214 lbs. for the Luis Ortiz fight. Bellew weighed 210lbs for his rematch against David Haye on May 5. There’s no excuse for Bellew not to be calling out Wilder unless he’s concerned about his devastating one-punch power, and his height and reach. Bellew obviously wouldn’t be able to use his favorite weapon, his short left hook against Deontay, because the Alabama native likes to stay on the outside and drop right-hand bombs from above. The only thing Bellew will be able to do on the outside is taking right hands one after another, and hope that Wilder gets tired of hitting him at some point. I don’t think Bellew will be able to take more than one or two rounds of steady right hand shots from Wilder before he takes a nosedive face first on the canvas. Anyway, it’s not surprising that Bellew hasn’t been calling out Wilder. He obviously knows his limitations as a fighter.

Heavyweight contender Dillian Whyte doesn’t think too much of Wilder moving down to cruiserweight, reportedly saying, “Get off the crack.”

Whyte still wants to fight Wilder in the worst way. But if Wilder moves down in weight, Whyte’s dreams of fighting him will diminish. Whyte weighs too much to drop down from the 250s to make the 200lb cruiserweight limit to face Wilder.

Well, if Whyte would just fight Luis Ortiz, he could get a title shot against Wilder, but unfortunately he doesn’t fancy the fight for some reason. Is it fear? You tell me. All I know is Whyte wants no part of the talented Cuban Ortiz and it’s so sad.