David Lemieux fails to make weight for Karim Achour, could move to 168 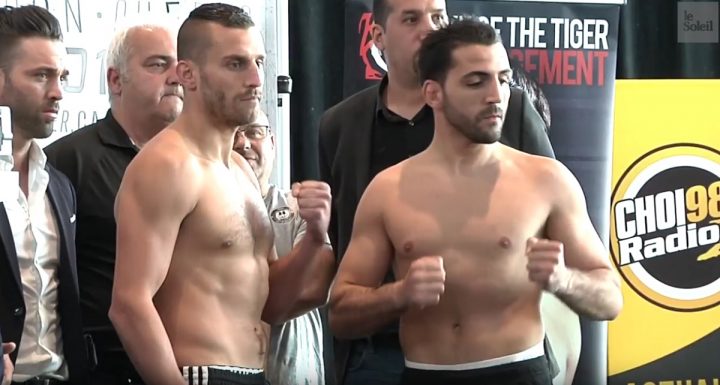 By Jeff Aranow: Former middleweight champion David Lemieux (38-4, 33 KOs) came in overweight at 162 pounds at Friday’s weigh-in for his fight against Karim Achour (26-4-3, 4 KOs) this Saturday night at the Centre Videoton, in Quebec City, Quebec, Canada. Coming in overweight has hurt Lemieux in the pocketbook with his purse for the fight slashed by 20%. Lemieux looked sickly at Friday’s weight. He had dark shadows under both eyes.

Lemieux is too dangerous for Canelo to fight at super middleweight. It’s possible that Golden Boy Promotions might still show interest in matching Canelo against Lemieux if they believe it’s a winnable fight for the Mexican star.

Achour, 31, weighed in at 159 lbs. Lemieux had been cutting weight since last Tuesday in hopes of getting down to the contract weight of 160. In hindsight, Lemieux should have started earlier in cutting weight, perhaps as early as last Sunday.

The good news is the Lemieux-Achour fight is still on for Saturday. The fight will go on, but Lemieux won’t have a chance to fight for the WBC international and francophone.

Lemieux went back to his dressing room and wore heavy clothing and exercised for 90 minutes in an attempt to take off the weight, but he only able to lose 3 ounces during that time. Rather than having Lemieux continue to try and take the weight off, his promoter Camille Estephan decided wanted him to take the fight as is. He was concerned with Lemieux’s health.

“We thought about David’s health first,” said Estephan said to Journal de Montreal. ”We do not understand what happened because he was very disciplined throughout the camp.”

Beofre going to bed last Thursday night, Lemieux had a sip of an electrolyte beverage. He had weighed in at 164lbs before going to bed, and it was clear that he was going to have problems trying to take off the 4 lbs. needed for him to make the 160lb weight limit on Friday.

Indeed, the 29-year-old Lemieux looked in good shape during training camp, appearing lighter than he had been in his previous fight against WBO middleweight champion Billy Joe Saunders on December 16. The thing is, Lemieux made weight for that fight at 160, but then he rehydrated and put on a massive amount of weight and looked really thick around the midsection.

There are no worries that Lemieux is going to lose to Achour, as he’s not in the same league as him talent-wise. This is a confidence booster type of fight for Lemieux, and not one that is expected to be competitive.

Lemieux is now looking at the possibility of moving up to 168 to begin campaigning at super middleweight. That’s not a good move for Lemieux, as he’s only 5’9”, and he would be at a huge disadvantage in the 168lb weight class against taller fighters like 6’3” Callum Smith, 6’2” Gilberto Ramirez, 6’2” Jose Uzcategui and 5’11 ½” George Groves. Lemieux’s career might depend on him still being able to make 160 somehow. If he can no longer make the weight limit for the middleweight division, then it’s going to be next to impossible for him to find success at super middleweight. The 5’8” Saul Canelo Alvarez was able to get 12 round draw against a taller 5’10 ½” middleweight champion Gennady Golovkin last September despite being jabbed from the outside all night, but Lemieux can’t count on judges scoring his fights in a similar manner of a taller fighter stays on the outside and jabs him from a safe distance without him being able to land his shots. Lemieux was helpless in his fights against Golovkin and Billy Joe Saunders, when those two guys stood on the outside and jabbed him.

“There is no question that I see him suffer like that,” Estephan said about this being the last time Lemieux fights at middleweight.

Two years ago, Lemieux had failed to make weight for his fight against James De La Rosa in 2016. The fight was cancelled after Lemieux weighed in 2.2 pounds over the weight limit for the fight. Lemieux has weighed in over 160 in two of his last four fights against Marcos Reyes and Cristian Fabian Rios.

It’s likely that Lemieux will choose to stay at middleweight in the future, but he’ll start cutting weight earlier in camp. It might also help if Lemieux trims down some of the muscle weight that he carries around by doing more running to lean out. If Lemieux can trim down some muscle, he’ll have an easier time making the 160lb limit. The only negative about losing muscle is it could impact Lemieux’s punching power, making him a less formidable puncher than he is now. But he might not have any other choice. If Lemieux moves up to 168, he’ll be picked apart by fighters with a 6” height and huge reach advantage. Lemieux won’t be able to beat the taller fighters at 168, and he may struggle badly. As it is, Lemieux is going to have problems even at 160 due to a lot of the guys having a height and reach advantage over him. But at 168, there are a lot of taller fighters that would dominate Lemieux on size alone.

Lemieux has been having problems making weight at middleweight ever since his loss to Gennady Golovkin in November 2015. It’s unclear why Lemieux has had problems since that fight, but it’s possible he let himself go after the match and started eating a lot in the seven months he was out of the ring until his next fight against Glen Tapia in May 2016. Lemieux made weight for the fight at 160 and destroyed Tapia in four rounds.

Lemieux needs to make sure he wins against Achour on Saturday night because he cannot afford another loss like the one he suffered in his last fight against Billy Joe Saunders.