Sadam Ali vs. Jaime Munguia on May 12 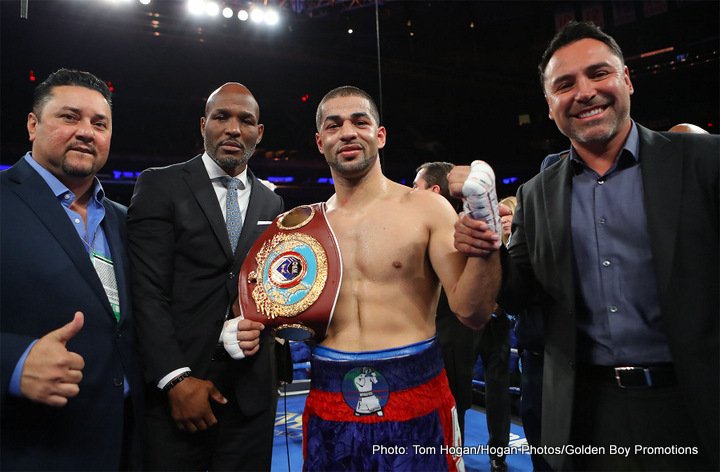 The 21-year-old Munguia, who comes from Mexico, will be stepping in to replace former WBO 154 pound champion Liam Smith as the opponent for the 29-year-old Ali’s first defense of his WBO title.

Smith had to pull out of the Ali fight due to an allergic reaction. Smith pulling out of the fight allowed Golden Boy Promotions to substitute one of their own fighters in Munguia to fight Ali. Golden Boy also promotes Ali as well, so it works well for them because this is now an in house fight.

If nothing else, Sadam Ali will at least get one successful title defense under his belt before he faces Liam Smith in his next fight and likely loses his title. That’s a positive for him. Ali does not belong at 154. The only reason he’s a champion right now is he beat an old, injured and over-the-hill Miguel Cotto last December to pick up the belt.

If Ali had to fight someone like Julian Williams, Liam Smith, Kell Brook or Austin Trout, he likely would have lost the fight to any of them. Those aren’t great fighters, but they’re more natural 154 pounders. I know Kell Brook just recently moved up to 154, but he’s basically been a junior middleweight his entire career. Like a lot of fighters, Brook chose to melt down from junior middleweight to fight at 147 to gain an advantage over the smaller fighters in that class. Sadam Ali is not that type of fighter. He’s more of a natural 147 lb. guy, and he’s not going to do well when he faces a decent junior middleweight.

Despite Munguia’s gaudy record, Sadam Ali will still likely be the favorite to win on May 12. Munguia’s opposition during his 28-year pro career has been worse than awful. His handlers have taken no chances with him whatsoever, and now he’s being thrown to the wolves. I can’t say that’s the smartest thing to do, but they must have their reasons for doing this.

It’s either they want to build Ali up or they’re hoping that Munguia’s natural size and power advantage will be enough for him to beat a more talented yet smaller fighter in Ali. In Ali’s last fight, he defeated an over-the-hill Miguel Cotto last December by a 12 round unanimous decision.

It was seen as a cherry pick gone wrong for Cotto, who was retiring after the fight, so Ali was picked out from the welterweight division for him to fight. Cotto was defending his World Boxing Organization junior middleweight title. It was thought that Cotto would win with ease because Ali is not a natural junior middleweight. He only moved up to 154 for that fight.

Munguia was recently considered as a replacement opponent for IBF/IBO/WBA/WBC middleweight champion Gennady Golovkin’s May 5 fight after his opponent Saul Canelo Alvarez pulled out of the fight. However, the Nevada State Athletic Commission rejected Munguia as a suitable opponent due to his inexperience and his level opposition during his 5-year pro career.

It appears the New York State Athletic Commission won’t have an issue with Munguia as the replacement opponent for Sadam Ali, as he is after all rated No.6 with the WBO at 154. However, that doesn’t escape the fact that Munguia is still totally inexperienced as a pro.

Munguia’s best opponents during his career have come against these fighters:

Those are not the type of opponents you fight to get a title shot. What’s missing on Munguia’s resume is a step up opponent or two for him to get the needed experience to prepare for a class of opponent. To go from fighting those guys to getting a title shot and even a top 10 ranking is a huge stretch. It would be understandable for Munguia to be getting a crack at the WBO title if he had beaten at least 1 good fringe level contender, but he’s not done that. More importantly, Munguia doesn’t look good even against the journeyman guys he’s been facing. He’s very slow and hittable. He fights like a younger, weaker version of Alfredo Angulo. The hand speed is the same as Angulo.

Munguia has never fought a contender before, and most of his opposition have poor records. Munguia has been feasting on journeyman level fighters since he turned pro. If you take away the soft jobs that Munguia has fought, his true record would be 0-0. In other words, he’s not even close to being ready for a title shot against anyone.

For all intents and purposes, Munguia has been fighting his amateur career as a pro. Instead of having a good amateur career, Munguia turned pro and he’s been fighting weak opposition. It’s not the ideal way of working one’s way up the ladder as a pro, but it sometimes works. It worked for Saul Canelo Alvarez. He fought soft opposition for the first 42 fights of his pro career until facing past his prime 40-year-old Shane Mosley in 2012. Munguia is on the same path, but he lacks the hand speed and defensive skills that Canelo has going for him. Munguia is slow and very easy to hit. They say Munguia is a good prospect. From what I’ve seen of Munguia, I don’t consider him a good prospect at all. I think he’s another slow guy with a padded record. I see Munguia as another Alfredo Angulo, but not as good as him.

If Munguia is able to use his natural size advantage over the career-long welterweight Ali, he might get lucky and beat him. I don’t see Munguia holding onto the WBO title for any length of time, because he’s too slow and too easy to hit. Once Liam Smith gets his skin condition taken care of, he’s going to destroy Munguia. I don’t see how it can go any other way. Smith looks a lot better than Munguia, and I’ve never been high on him. He’s a much better overall fighter.


« Jacobs’ promoter expects GGG to be stripped of IBF title