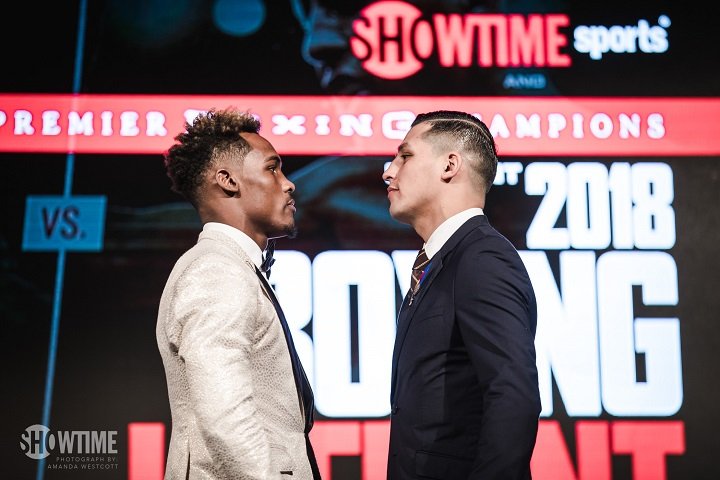 The winner of the Charlo-Centeno Jr. fight will be crowned as the new interim WBC middleweight champion. It’s likely that whoever wins this Saturday’s fight, they’ll need to wait until 2019 before they get a shot at the WBC belt. That could be against Golovkin if he beats Saul Canelo Alvarez.

If Canelo beats Golovkin, it’s hard to say for sure what precisely he’ll do, because he doesn’t seem to be interested in holding down belts and defending them against the top contenders. Canelo and his promoters at Golden Boy Promotions seem to prefer to face who they want rather than being forced to fight mandatory challengers.

Charlo-Centeno Jr. has already been postponed because of Centeno Jr. having suffered a rib injury while training. Centeno Jr. is now ready to fight without any lingering problems with his rib. Both fighters are 27, and fighting at a high level. This is one of those contests that promises knockout.

Charlo is considered the favorite, but Centeno Jr. is dangerous due to his power and looping punches that he likes to throw. If he catches Charlo with one of his looping shots, he could knock him out like he did with his last opponent Immanuewel Aleem in stopping him in the 3rd round on August 25 last year. Centeno Jr. has stopped his last two opponents since losing to Maciek Sulecki by a 10th round knockout in June of 2016. Centeno Jr. has gotten a lot better since then, and it’s quite possible that it would be a different story if the two fighters fought each other now.

Sulaiman expects the Charlo-Centeno Jr. fight to be a real brawl from start to finish on Saturday night. It could be an excellent contest, as both fighters like to slug and have good punching power.
The WBC will allow Golovkin to take a voluntary defense on May 5 if he chooses, and then face Saul Canelo Alvarez in September if he’s available to fight. If not, then it remains to be seen whether the WBC will order Golovkin to face the Charlo-Centeno Jr. winner at that time.

The problem is the IBF wants Golovkin to face his mandatory challenger Sergiy Derevyanchenko if Canelo isn’t fighting him. So, it’s going to be up to the two sanctioning bodies to decide which mandatory GGG should face.

Hearn: Wilder isn’t worth a 60/40 purse split for Joshua fight »