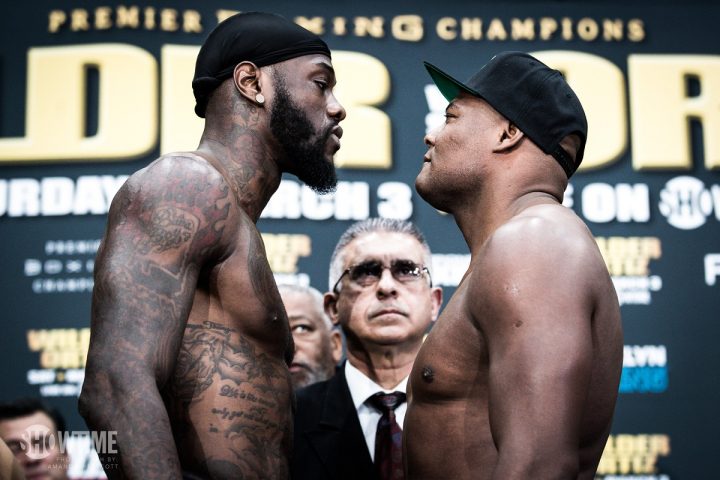 By Jim Dower: WBC heavyweight champion Deontay ‘Bronze Bomber’ Wilder (39-0, 38 KOs) will be giving away 26.5 pounds to challenger Luis ‘King Kong’ Ortiz (28-0, 24 KOs) on Saturday night in their fight at the Barclays Center in Brooklyn, New York. Showtime Championship Boxing will be televising the Wilder-Ortiz card.

Wilder weighed in at 214.75 pounds on Friday at the weigh-in. Ortiz came in at much heavier 241.25 lbs. For Ortiz, that’s about the same weight he usually weighs in for his fights. In his last fight, Ortiz weighed 242 lbs. against Daniel Martz last December.

In Ortiz’s fight before that, he came in at 241 lbs. for his match against David Allen. Deontay Wilder’s 214 lbs. is 6 lbs. lighter than the 220 lbs. he weighed for his last fight against Bermane Stiverne. Wilder’s weight has been slowly dropping since September 2015. Wilder’s 214lbs is the lowest weight for him since his second pro fight of his career in March 2009 against Shannon Gray.

Wilder stopped Gray in the 1st round. The lowest weight of Wilder’s career is 207 lbs. for his pro debut against Ethan Cox in November 2008. If Wilder gets knocked out by the 38-year-old Ortiz on Saturday, his decision to come in so light will be second-guessed by a lot of boxing fans.

Wilder’s weight is what cruiserweights typically weigh after they rehydrate for their fights in the cruiserweight division. For all intents and purposes, Wilder is a cruiserweight fighting at heavyweight. He might have problems on Saturday with Ortiz. If Wilder gets past Ortiz, he’s going to need to figure out how he’s going to deal with the 254 lb. IBF/WBA heavyweight champion Anthony Joshua. Wilder could be giving away 40 lbs. to Joshua if he were his opponent on Saturday.

Ortiz, 38, looked a little flabby at the weight. It’s normal weight, but he’s not as trim as he used to be earlier in his career. He’s built more like Larry Holmes when he was in his 40s. Holmes was still a very good fighter when he got up there in age, but he was carrying a lot of excess baggage around his waist. Ortiz might be fine as long as he can step too Wilder and land his left-hand power punches.

Ortiz cannot stay on the outside against Wilder, because that will leave him at the mercy of the Bronze Bomber’s hard right hands. Wilder is devastating puncher when he has the right spacing between him and his opponents. He doesn’t hit nearly as hard when he’s crowded. As we witnessed in Wilder’s brutal 9th round knockout of Artur Szpilka in January 2016, he can punch from in close at times. That was a rare knockout for Wilder with a punch thrown from close range. Szpilka isn’t known for having the greatest punch resistance.

Not much has been said about whether Wilder has a rematch clause in the contract for the Ortiz fight, but you’d have to believe his management has him covered in that area. This is a voluntary defense for Wilder, so his management should have a rematch clause in the contract in case something unforeseen happens like him losing. A loss for Wilder would be catastrophic. He would put in the position where a fight against Joshua would no longer be viable. If Wilder beats Ortiz in a rematch, he could still get a unification fight against Joshua, but you’d have to believe the terms would be heavily tilted in the British heavyweight’s favor. Wilder must not lose this fight against Ortiz for him to stay on course to face Joshua for a big money fight later this year or in 2019.

Ortiz needs a win against Wilder to put himself in position for a big payday fight against Joshua. Ortiz could make feather his retirement nest egg by beating Wilder. The money Ortiz will make against Wilder is nothing compared to the purse he’ll get for a unification fight against Joshua. Ortiz will likely need to beat Wilder twice in a row before he’s free to move on and face Joshua in a unification fight. It’s quite likely the contract language in the rematch clause states that Ortiz must face Wilder in an immediate rematch. That means Ortiz will need to beat Wilder twice. That won’t be easy for Ortiz to do. Wilder will surely come in heavier in the rematch, and that could make it trickier for Ortiz.

Interim IBF super middleweight champion Andre ‘The Resurrected’ Dirrell (26-2, 16 KOs) weighed in at 167.75 lbs. for his rematch against Jose Uzcategui (26-2, 22 KOs). Uzcategui weighed 166 lbs. Dirrell looked thin at the weight. Dirrell probably should have moved up in weight several years ago to light heavyweight, because he struggles and looks drained in getting down to the 168 lb. weight limit.

Dirrell-Uzcategui will be an exciting fight for as long as it lasts. Dirrell was knocked out with a punch thrown after the bell in the 8th round last May in his previous fight against the 27-year-old Uzcategui at the MGM National Harbor in Oxon Hill, Maryland.

Uzcategui was disqualified for the punch after the bell. The International Boxing Federation ordered a rematch between the two fighters. This time it’s hoped that there won’t be another controversial ending. Dirrell needs to stay off the ropes, as he spent a good portion of the time fighting defensively against Uzcategui last May. For his part, Uzcategui has to listen for the bell at the end of the rounds, as he twice fouled Dirrell in the fight by hitting him after the bell. Seeing a fighter land one shot after the bell is one thing, but when they do it twice, it suggests there’s a problem with that fighter.

Uzcategui looked frustrated because he was missing so badly. Instead of taking some power off of his punches to improve his accuracy, Uzcategui continued to load up and miss badly in round after round. We saw Uzcategui’s frustration come out with him hitting Dirrell after the bell twice. If Uzcategui does that on Saturday night, he’ll be asking for trouble. It’s doubtful the referee will put up with that for long before he starts taking points off. 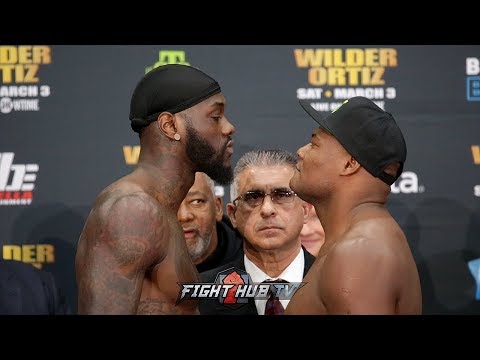