Spence: I’ll fight Kell Brook at 154 if he wins a world title 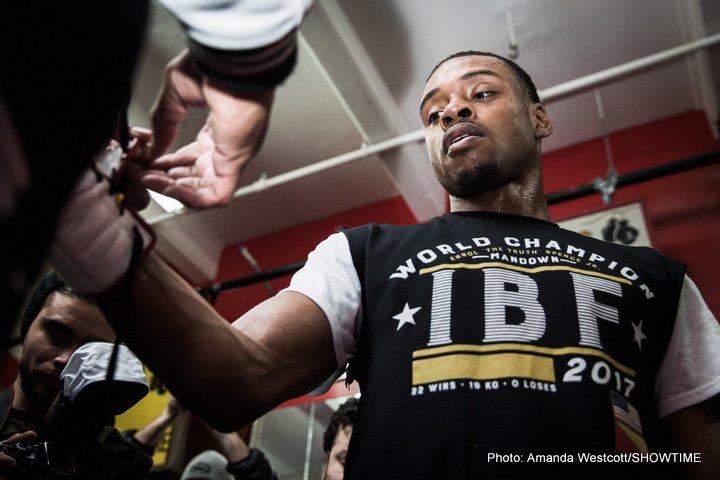 By Scott Gilfoid: Errol Spence Jr. says he’ll gladly face Kell Brook in a rematch at 154 if he captures a world title in that division. Brook still doesn’t have a world title belt at junior middleweight, but he captured the WBC Silver 154 lb. title last Saturday. That’s not a world title, but it puts him in the position to fight WBC champion Jermell Charlo. That fight is there for Brook if he and his promoter Eddie Hearn are willing to take it.

Brook seems to think that he’s a better fighter at 154 than he was at 147. Will being heavier help Brook in a rematch with Errol Spence? It’s a matter of debate. Spence has made it clear though that he only wants to face Brook a second time if he wins a world title at 154. Brook says he wants to become a 2-division world champion by winning a title at junior middleweight, but that might be a pipe dream on his part unless he can get a shot at the winner of the Sadam Ali vs. Liam Smith fight. Ali holds the WBO strap.

A rematch between Brook and Spence would be a nice fight in theory, but there’s too much on the line for that fight to be made anytime soon. Hearn wants Brook to fight Amir Khan at the end of the year. That fight is first and foremost the match that Hearn and Brook want. If Brook does fight for a world title at 154, it’s probably going to be against WBC champion Jermell Charlo (30-0, 15 KOs). That would be Brook’s decision whether to take that fight. Hearn isn’t going to pressure Brook to take on a dangerous guy like Charlo, as the chances of him losing that fight would be high.

Brook was beaten by Spence last year in May. Hearn blames the loss on Brook suffering an eye injury and being weakened from dropping down from middleweight to 147. Brook’s fight before the Spence match was against IBF/IBO/WBA/WBC middleweight champion Gennady ‘GGG’ Golovkin in September 2016. Brook bulked up for that fight to try and be competitive with GGG. It didn’t work out well for Brook unfortunately, as Golovkin hurt him with a left hook in the 1st round that broke his left eye socket. Fighting with an injured eye, Brook lasted until the 5th round before he was pulled out of the fight by his trainer Dominic Ingle.

Brook (37-2, 26 KOs) is now fighting at junior middleweight, and captured the WBC Silver 154 lb. title last Saturday night in stopping contender Sergey Rabchenko (29-3, 22 KOs) in the 2nd round at the Sheffield Arena in Sheffield, England.

Hearn said to IFL TV that he would “love” to match Brook up against Errol Spence in a rematch at junior middleweight. According to Hearn, Brook “was winning the fight” but wound up losing because of “the weight killed him.” The Brook-Spence fight as close in the first 6 rounds, but Spence took over the contest from the 7th round and ended up stopping Brook in the 11th. Brook suffered an eye injury during the fight to his right eye, and he subsequently needed another operation to repair the problem. Hearn blames Brook’s loss to Spence on the weight and the eye injury. It looked like Spence’s body punching was the thing that turned the fight around though. Once Spence stopped head-hunting as much in the mid-point of the fight, he seemed to take over with his hard body shots he was landing on Brook.

Personally, I think it’s a bad idea for Brook to face Spence again. Brook probably isn’t going to win a world title at 154. That’s the cold reality of the situation. So, Brook is not going to be able to fulfill the requirement that Spence has asked for in him winning a world title at junior middleweight before he’ll face him. Secondly, Brook will make a ton of money fighting Amir Khan in December. The kind of money that Brook makes against Khan will make it unlikely that he’ll take a tremendous pay cut to face a dangerous fighter like Spence in a rematch. Ideally, if Brook vs. Khan is a competitive match-up, the two fighters can face each other in an immediate rematch in early 2019 and take advantage of the fan interest in seeing those two fight each other again.

If Brook destroys Khan this December, then obviously a second fight won’t be happening between them. In that case, Brook will probably look to face Liam Smith if he captures the WBO junior middleweight title against champion Sadam Ali in their potential fight on May 12. If Smith is still the 154 lb. champion by 2019, then that’s a fight that Hearn will almost surely try and make. It’s also quite possible that Hearn will try and lure Smith into fighting Brook in the summer if he’s willing to get back into the ring that quickly after the Ali fight. The Smith-Brook fight would have to take place in August though for it to be feasible. There’s no chance of Smith fighting Brook in June after having fought Ali in May.

Brook is probably going to have to move back down to 147 for him to face Amir Khan in December. After the way Brook looked in blowing through Sergey Rabchenko in 2 rounds last Saturday, Khan isn’t going to be eager to move up to 154 to fight him in that weight division. Khan is going to want an advantage over Brook, as he recently found out the hard way what happens when you give a bigger fighter the weight advantage in his knockout loss to Saul Canelo Alvarez in May 2016. Brook will likely need to kill himself to make weight at 147 for the Khan fight if he wants it to take place. The good news for Brook is he’ll likely beat Khan with ease regardless of how drained he is in making the 147 lb. limit. If Khan is able to drag Brook into the later rounds, we might see him dealing with fatigue issues at that point in the fight. But it’s unlikely that Khan will be able to take Brook past the 6th round unless he runs from him, which I doubt he’ll be able to do effectively.