By Scott Gilfoid: Shannon Briggs is over the moon right now saying that former unified heavyweight world champion Tyson Fury told him today that he plans on taking a tune-up fight in June before facing him in September.

Briggs hasn’t fought in 2 years since his 1st round knockout win over Emilio Zarate in May 2016. If anyone is in need of a tune-up, it’s Briggs. He’s been out of the ring for almost as long as Fury, who last fought in November 2015.

“He’s 6’9” but I don’t really see all that, because he ain’t no puncher,” Briggs said to Fighthub about Tyson Fury. “As a big guy, he ain’t no puncher. I see Joshua at the top. Wilder is right there. You can’t take nothing away. He’s got thunder. As far as Tyson [Fury], I’m not really giving him all that, because he walked away from the game because he had some bad things. I’ve been through that myself,” Briggs said about him not rating Fury at the top with Anthony Joshua and Deontay Wilder as the best heavyweights in the division. “He’s been texting me all day. We’ve been talking. He’s like, ‘Listen, we want to have a tune-up in June,’ and then he said he wants to fight me in September. So if that’s true, what he said is true, I got the text right here to prove it. I don’t want anyone to think I’m trying to gas it up. If he get through me, then maybe, but I don’t think he’ll get through me. Listen, I already got him beat. Look what he said, his first words, ‘Hi Champ.’ He know my name. He already lost.” Briggs said.

Briggs needs to get a tune-up in as well if he’s going to make the fight with Fury look credible. It’ll look gawd awful if Briggs enters the ring against Fury coming off of a 2-year layoff. It does look bad that Fury needs a tune-up to face a guy that is about to turn 49-years-old in December. Fury should be able to beat Briggs straightaway. Why does Fury need a tune-up to fight Briggs?

”Hi Champ, hope you’re well, looking to get you your fight with me. How much do you want to deal? It would have the best buildup in the division today.”

I do agree with Fury that a fight between him and Briggs would have a huge buildup. David Haye should have agreed to face Briggs two years ago when he was interested in fighting him in 2016. Briggs even fought on Haye’s undercard against Zarate, hoping he would get a fight against him, but it never transpired. Will Fury do the same thing with Briggs by talking up a fight and then not facing him? 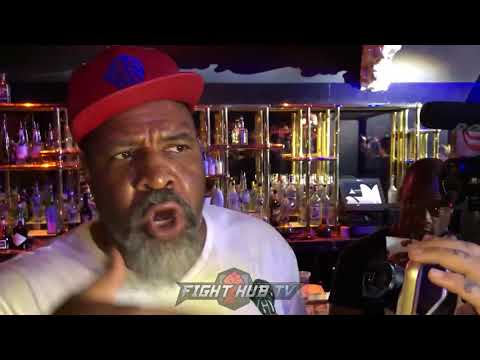 Brandon Rios: Canelo should be suspended and made example of »