Sadam Ali defends against Liam Smith on May 12 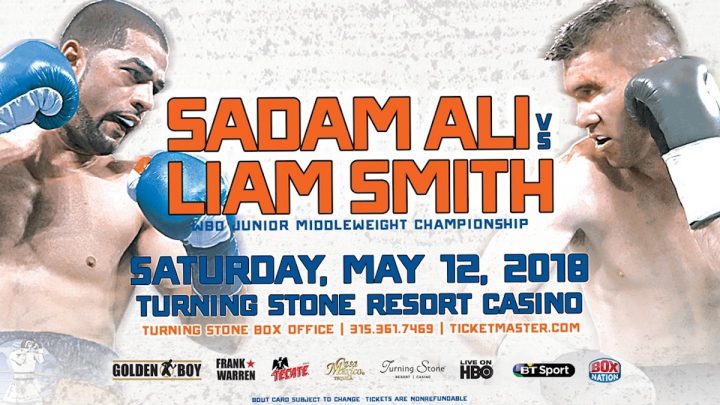 Ali-Smith will be packaged with the Saul Canelo Alvarez vs. Gennady ‘GGG’ Golovkin 2 replay on HBO on the 12th of May. The broadcast starts at 10pm ET/7pm PT on HBO.

Ali is going to have a hard time holding onto his WBO title against a guy like Smith, who can punch and he’s a natural 154 lb. fighter. Ali moved up to 154 to fight a past his prime 37-year-old Cotto last December. Ali took advantage of Cotto’s age, injuries and inactivity to win a close 12 round unanimous decision.

Cotto had several things going against him against Ali, and the totality of those things led to him losing by a narrow decision. Liam Smith doesn’t have the same vulnerabilities that Cotto had against Ali. Smith is still young at 29, he’s uninjured, and he’s been active with his career in the last two years with wins over Liam Smith [x 2] and Marian Cazacu. Those aren’t the greatest fighters in the junior middleweight division, but the fact that Smith was still busy counts for something.

Judging by the lack of enthusiasm from the fans over the news of the Ali-Smith, this isn’t the match that they were hoping to see from the 29-year-old Ali. Smith was beaten badly just two years ago by Saul Canelo Alvarez by a 9th round knockout in September That was the end of Smith’s 1-year title reign as the WBO 154 lb. champion. He had defended the title tice successfully over woeful opposition in Predrag Radosevic and Jimmy ‘Kilrain’ Kelly before losing the title against Canelo. You can say that Smith was milking the WBO title in his first two defenses before facing Canelo.

Ali vs. Smith will be taking place on May 12 at the Turning Stone Resort Casino in Verona, New York. The Ali-Smith fight will be taking place on the same night as the lightweight contender on ESPN between WBA 135 lb. champion Jorge Linares vs. Vasyl Lomachenlo at Madison Square Garden in New York. The ESPN televised Linares-Lomachenko fight card will take place two hours earlier than the Ali-Smith & Canelo-GGG 2 card on HBO. It’s a good thing the Linares-Lomachenko and Canelo vs. Golovkin cards aren’t running at the same time, because they would hurt the interest in those fights.

“It felt great to accomplish my dream of becoming world champion,” Sadam Ali said. “I’m excited to defend my title and to demonstrate that it is not up for grabs. Liam Smith is a great fighter and I’m sure he’ll be ready, but so will I.”

It’s important that Ali win this fight over Smith, as it’ll put him in great shape for a bigger fight against former IBF welterweight champion Kell ‘Terminator’ Brook. There’s interest on Brook’s part to take the fight with li for his WBO title. The fight might not happen in 2018, but it’ll be a possible option in 2019 for sure if Ali can hold onto his title long enough. Smith could get the very same fight against Brook if he can defeat Sadam Ali on May 12.

Sadam Ali has wins over these fighters:

The lone defeat for 2008 U.S Olympian Sadam Ali came against Jessie Vargas in March 2016. You can say that was an off night for Ali, because everything went wrong for him in that fight. Ali got caught up in trying to slug with Vargas, who isn’t known for being a big puncher, and things fell apart quickly. Vargas knocked Ali down in round 8 with a right hand. The smart thing for Ali to have done at that point would have been to get on his bike and stay o of harm’s way until Vargas faded a little bit. Ali chose instead to get in the trenches and trade with Vargas, and that led to him getting knocked down for a second time in the 9th. The fight was then halted at that point. Ali stayed in the pocket a little too long against Vargas, and he paid for it by getting knocked out.

Ali can beat Smith if he boxes him for the full 12 rounds, and fights smart. Ali doesn’t have the fire power to knockout Smith the way Canelo Alvarez did in September 2016. That was far from an easy fight for Canelo. Smith’s power, punch output and his fast start gave Canelo all kinds of problems in the first four rounds. It was only after Smith gassed out that Canelo was able to come on and score knockdowns in the 8th and 9th rounds to get a stoppage win. Ali doesn’t need to fight Smith the way Canelo did. That would be foolish for Ali to fight the bigger, stronger and more experienced Smith by trading with him. Ali has the advantage in boxing skills and speed over Smith. He just needs to use his advantages and make sure he’s not stationary like he was in his loss to Jessie Vargas.

Smith captured the WBO 154 lb. title in October 2015 in stopping American John Thompson in the 7th round. Smith looked good in that fight. Unfortunately, he didn’t take advantage as his time as the WBO champion to take on some of the better fighters in the division like Demetrius Andrade, Erislandy Lara, Jermall and Jermell Charlo and Jarrett Hurd. Those guys were around at the time, but Smith was steered into safer waters by his management with him making title defenses against Jimmy Kelly and Predrag Radosevic. Those fighters are no longer top 15 contenders. If Smith wins the WBO title off of Ali, he’ll have to face other guys. Hopefully, Smith’s management matches him against better fighters than they did when he held the WBO belt in the past, because he did nothing with his title during his year as the champion for that organization.

“I’m looking forward to pitting myself against a good fighter in Sadam Ali, a former Olympian and now world champion who is coming off the back of a good win against Miguel Cotto,” Smith said. ”I’m confident going into this fight. I know I’m naturally the bigger man, and that will come into play, especially in the type of fight that I think it will be.”

Smith has the size and power over Ali in this match. Ali did a good job of neutralizing Cotto’s punching power, but he was injured and old at 37. This wasn’t the same Cotto that fought Canelo in 2015. Cotto aged, and Ali was able to take advantage of that to squeak by with a narrow 12 round decision.