Kovalev says about Mikhalkin: “We’ll beat each other very hard” 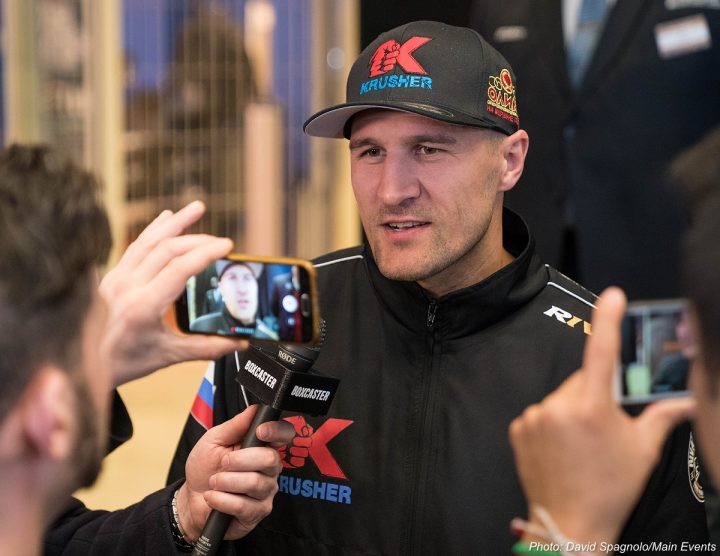 By Allan Fox: WBO light heavyweight champion Sergey ‘Krusher’ Kovalev (31-2-1, 27 KOs) and Igor Mikhalkin (21-1, 9 KOs) were friends many years ago when they were both amateur fighters in Russia. Kovalev, 34, says the two of them will beat each other this Saturday night and still be friends afterwards.

Kovaev and Mikhalkin, 32, will be fighting on Saturday night on March 3 at Madison Square Garden in New York. The fight will be televised by HBO Boxing.

The network has chosen to televise the Kovalev-Mikhalki fight despite it promising to be a one-sided affair. This is a boxer (Mikhalkin), who wins his fights by decision mostly facing a slugger in Kovalev. We all know how Kovalev wins his fights. Mikhalkin doesn’t have the power to hurt Kovalev, and his only way of winning is to go 12 rounds with him and hope he can win a decision.

It’s not a good fight. There’s nothing to get too excited about here. Mikhalkin will need to follow Andre Ward’s blueprint to the letter for him to have a shot at beating Kovalev. Mikhalkin is not an inside fighter like Ward, and he probably won’t be able to grapple with Kovalev long enough to tire him out.

Hopefully, HBO puts some heat on Kovalev afterwards by gently letting him and his promoters at Main Events know that he needs to step it, because Mikhalkin is the second soft opponent in a row for Kovalev. It appears that Kovalev is slowly being rebuilt by his promoters to get him back to where he was before he was beaten twice by Andre Ward. But having Kovalev’s fights against over-matched opposition televised on HBO as the main event, it looks bad. It’s not a good deal for the boxing public to see Kovalev facing fringe level fighters repeatedly on HBO.

If Kovalev is going to fight the winner of the co-feature bout between WBA World light heavyweight champion Dmitry Bivol and Sullivan Barrera, then it’s not so bad that he’s taking an easy fight against Mikhalkin on Saturday night. Bivol’s fight with the Cuban Barrera is far better than the Kovalev-Mikhalkin fight. HBO should have flipped those fights around by insisting that Bivol and Barrera be at the top of the bill and the Kovalev-Mikhalkin fight be the co-feature bout. It would help build up a fight between Bivol and Kovalev if Bivol were in the main event on Saturday. Bivol has a real fight on his hands against Barrera. By testing himself against one of the best fighters in the light heavyweight division, Bivol is set to increase his popularity considerably in the boxing world. It’s too bad Kovalev isn’t interested in doing that.

“I am really happy back to in New York at Madison Square Garden,” Kovalev said. ”This is right now my favorite place to fight…right now, and my goal to defend the title. His goal, to get this title. It will be very interesting fight.”

Kovalev’s last fight came against Vyacheslav Shabranskyy last November. Kovalev stopped him in the 2nd round to win the vacant World Boxing Organization light heavyweight title. Kovalev’s management were able to petition the WBO to have the vacant WBO 175lb. title on the line for that fight. It worked out well for Kovalev, because he didn’t have to face a good fighter that might have given him a real test like Oleksandr Gvozdyk, Marcus Browne or Anthony Yarde. Kovalev should have had to fight one of those fighters for the WBO title instead of Shabranskyy, who had recently been knocked out in the 7th round by Sullivan Barrera in December 2016.