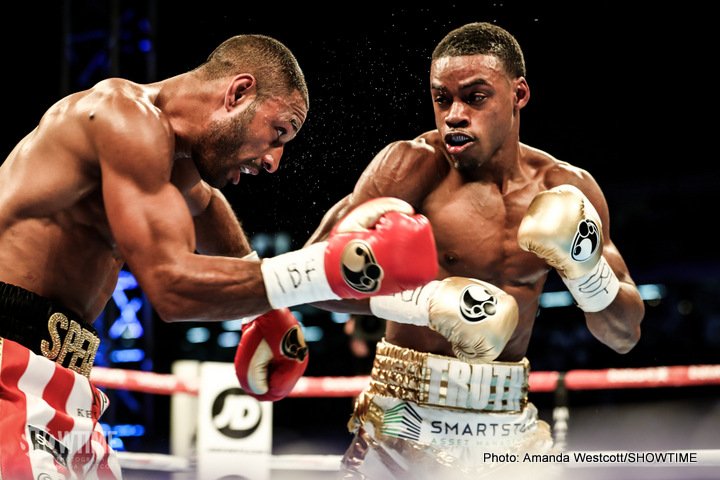 By Scott Gilfoid: Kell Brook wants the rematch with Errol Spence Jr. in the junior middleweight division at Bramall Lane in Sheffield, England. Brook, 31, is still bothered by his 11th round knockout loss he suffered against Spence last year, and he wants to try and avenge it if he can.

Brook (37-2, 26 KOs) is targeting a second fight with Spence, but it doesn’t look like it’s even a possibility for 2018. Brook plans on fighting next in June, and that’s the same month Spence will be making his second defense of his IBF welterweight title against Carlos Ocampo (22-0, 13 KOs). Spence, 28, will be fighting Ocampo on June 16 on Showtime Boxing in Dallas, Texas. So in other words, Brook is doing a lot of talking but with no real plans on backing up his tough talk.

Brook will be making his second fight at 154 in June. He stopped Sergey Rabchenko in the 2nd round on March 3 in fight No.1 at 154. Brook was offered a title shot against WBC junior middleweight champion Jermell Charlo, but he doesn’t want that match so soon. Brook and Charlo will be fighting at some point if the two of them keep winning, but not this year.

“He’s not breaking anything. I’m a different guy,” Brook said to Fighthub in response to a comment Spence made about how he’d break both of his eye sockets if he fights him in a rematch.

“It’s a massive fight. You don’t need a world title to fight. Let him leave his welterweight title. He’s a massive middleweight as well. Let him come to 154 or under the weight if he’s complaining. We can do it again at Bramall Lane,” Brook said.

Spence doesn’t see the point in fighting Brook again unless he’ a world title holder at 154. Brook has other thoughts though. He think Spence should take the fight with him regardless. From Spence’s perspective, it’s still too soon for him to fight Brook again. Brook has only fought once since his loss to Spence, and that was fight with Rabchenko. Brook has to get some more wins under his belt before Spence will take interest.

If Brook beats a good junior middleweight in the summer followed by an impressive victory over Amir Khan in their mega-fight later this year, then Spence might start showing interest in fighting him. Spence is trying to make a name for himself at 147. If he begins fighting guys at 154, he’ll be seen as a weight bully if he comes back down to fight at welterweight. It also might be harder for Spence to make the 147 lb. limit once he goes up to 154 to fight. We’ve seen that from a lot of fighters, even Brook. When Brook moved up to 160 for his fight against middleweight champion Gennady Golovkin in September 2016, he had a hard time getting his weight back down to make the 147 lb. weight limit for his fight against Spence last May.

“I think this weight here, there’s not a light middleweight that can touch him,” Billy Joe Saunders said to Fighthub about Brook. “I’d love to see a rematch (between Brook and Spence) at tat weight. I’d love it.”

It would a mistake for Brook to take the Spence fight so soon. If Brook loses again to Spence, it would be a huge setback for him and his career. Book should instead focus on getting some more wins under his belt before even considers a second fight with Spence. The rematch can happen in a year or two. Spence is going to stay on top a 147 for a long time. Brook should try and win the WBC or WBO belt at 154, and get the boxing public excited about his career once again. Beating Rabchenko wasn’t a big enough win to make the boing fans forget about his two losses to Golovkin and Spence. It’s going to take a real win against a top 154 lb. fighter to get the fans to forget about those loses. Rabchenko wasn’t a good enough fighter to do much for Brook’s career.

Brook and Saunders don’t think much of former two division world champion Saul Canelo Alvarez following his two positive tests for the banned substance clenbuterol. They see Canelo as cheating, and they think it’s diminished his career. Canelo is fighting Golovkin in a rematch on May 5th on HBO PPV at the T-Mobile Arena in Las Vegas, Nevada.

“Cheating [expletive],” Saunders said about Saul Canelo Alvarez testing positive for clenbuterol. “The wins really should be took off. It’s cheating, isn’t it? Let’s make it legal and let everybody do it. That way it’s not cheating, is it? All these fighters in that part of the world (Mexico) are doing it,”Saunders said.

Saunders thinks that all the elite fighters in Mexico are using clenbuterol to gain an edge on their competition. With Canelo’s positive test, Saunders now discredits everything he’s done in the past, because he feels that he might have been using back then. Since he can’t know for sure whether Canelo was using while winning 49 fights as a pro, he thinks all of the victories should be erased from his record. Saunders’ idea of making clenbuterol legal isn’t going to happen. Saunders should instead be saying is that anyone testing positive for clenbuterol should be banned or suspended from boxing. Excuses for why a fighter tested positive for clenbuterol shouldn’t be accepted by VADA or the boxing Commissions. That’s the best way to keep fighters from using the drug.

“It took the shine off completely of what he’d one,” Brook said of Canelo testing positive for clenbuterol. “We don’t know how long he’s been doing this. It’s dangerous. You can’t be doing it.”

Canelo’s promoters at Golden Boy Promotions have their work cut out for them in trying to rebuild his credibility following the positive drug test. When casual boxing fans hear about a fighter testing positive, they’re not focusing on the excuses for why a fighter tested positive. They just see the fighter as being guilty. That’s the sad part. Canelo is viewed as being guilty by a lot of fans. It’s up to him to show that he’s not a cheat by staying clean the remainder of his career if possible.