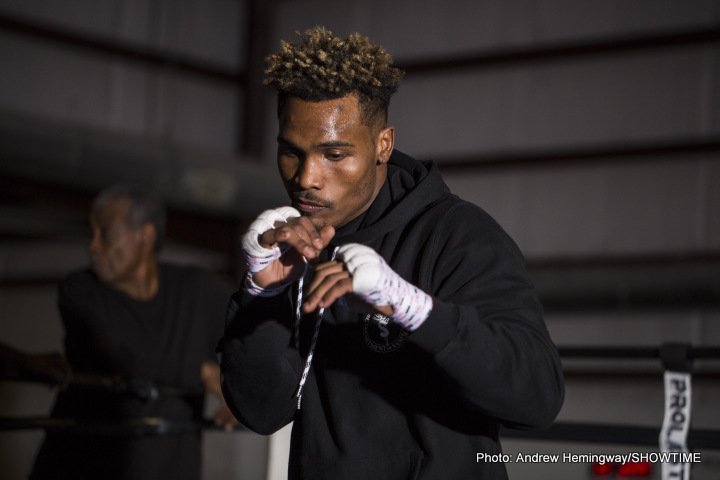 By Dan Ambrose: Jermall Charlo doesn’t like that his fight against Hugo Centeno Jr. has been moved to the same card as former world champions Adrien ‘The Problem’ Broner and Gervonta ‘Tank’ Davis on April 21 on Showtime Boxing at the Barclays Center in Brooklyn, New York.

Charlo says every time he’s on one of Broner’s cards, he loses, and it looks bad for him. The unbeaten Charlo (26-0, 20 KOs) says he’s “deleting” Broner if he loses his fight against Jessie Vargas on the April 21 card, as he doesn’t want to fight his card ever again.

Charlo was supposed to fight the 27-year-old Centeno Jr. (26-1, 14 KOs) on March 3 on the undercard of WBC heavyweight champion Deontay ‘Bronze Bomber’ Wilder vs. Luis ‘The Real King Kong’ Ortiz on Showtime Boxing, but the fight was postponed until April 21 because of a rib injury Centeno Jr. suffered in training. Charlo, 27, now finds himself sharing the same card as Broner and Gervonta Davis. That means those two won’t get the same kind of publicity as they would if it was just them on the card.

Charlo and his twin brother Jermell have a way of upstaging the other fighters on their cards with their often-spectacular fight-ending knockouts. Having Charlo on the April 21 card will put more pressure on Broner and Tank Davis (19-0. 18 KOs) to impress the boxing fans on the night. A lot of fans think Broner will lose to the former 2 division world champion Jessie Vargas (28-2, 10 KOs). It’s quite possible Broner will lose this fight. The 23-year-old Davis is fighting former WBA World featherweight champion Jesus Marcelo Andres Cuellar (28-2, 21 KOs), who is coming off of a 12 round split decision loss to Abner Mares a year and a half ago on December 10, 2016. Davis and Cuellar are fighting for the vacant World Boxing Association Super World featherweight title.

Broner could see his career flushed if he loses his fight with Jessie Vargas on the 21st of April. That would be Broner’s third defeat in the last three years of his career. He’s fighting at 140 now, and he’s probably not going to be able to beat the two best fighters in the weight class in Regis Prograis and Jose Ramirez. Even Kiryl Relkkh might have too much power for Broner.

In fairness to Broner, Charlo has only fought on one of his cards in the past, and that was on the undercard of his loss to Mikey Garcia on July 29 last year on Showtime Boxing at the Barclays Center in Brooklyn, New York. Broner lost a one-sided 12 round unanimous decision to Garcia in that fight. In contrast, Charlo defeated Jorge Sebastian Heiland by a 4th round knockout. Charlo dropped Heiland twice in the fight in knocking him down in rounds 2 and 4.

It’s a not a good deal for Charlo to fight on Broner’s cards, because a lot of boxing fans have given up on following the sagging career of Broner, who is seen as an over-the-hill fighter by many. Despite Broner being only 28, his best days in the sport are well past him. Broner hasn’t looked great since 2013. He’s struggled and looked poor in the five years since then. Broner has lost to Marcos Maidana, Shawn Porter and Mikey Garcia in the last 5 years. Broner looked bad in his wins over Adrian Granados, Ashley Theophane, Paulie Malignaggi and Emmanuel Taylor. If Charlo keeps getting put on Broner’s fight cards, it could mean fewer boxing fans will see him fight, especially if The Problem keeps losing.

”The main event looks like s—t. The card don’t get no recognition,” Charlo said of the Broner vs. Vargas fight on April 21. ”No, I don’t want to be on Adrien Broner’s card. I’m sorry, I’m just speaking facts. I don’t care,” Charlo said.

Charlo probably won’t start headlining his cards until he captures a world title at middleweight. That could be a year away. It also depends on whether WBC 160 lb. champion Gennady ‘GGG’ Golovkin vacates or loses his title. If Golovkin loses to Saul Canelo Alvarez in their rematch on May 5 or if he moves up in weight to super middleweight, then Charlo has a better chance of winning the WBC belt. Canelo could wind up with the WBC title if he gets past GGG on May 5. If Canelo loses, then Golovkin plans on fighting WBO middleweight champion Billy Joe Saunders and then either moving up in weight or staying at 160 to defend his belts. Either way, Charlo will likely get a shot at the WBC 160lb. title next year.

”I’m still going to make my paydays anyway, but who he got? Tank? That little [expletive] aint fight nobody,” Charlo said about Gervonta ‘Tank’ Davis. ”He’s with Mayweather, and he ain’t fought nobody. If Adrien Broner don’t win this fight, we’ll have a great career. He’s deleted. This little fat Tank mother-expletive think he got it. He thinks he’s Mayweather. I read the comments that he’s mad because they moved me to his card, and him and Adrien Broner’s supposed to take over. I’m sorry; my opponent got a broken rib. I got to fight him on your card, and that means your TV time will be cut short. You better knock your boy out, because I’m going for Centeno, whatever his name is. Every time I see you in public, you ain’t really about that s—t. You stuttering, slow, dumb-talking mother-f—-r,” Charlo said.

Charlo sounds like he doesn’t think too highly of the 23-year-old Davis. It is true though that Davis hasn’t fought any of the talented guys at super featherweight. His promoters at Mayweather Promotions haven’t matched him against the tough guys in the division in Vasyl Lomachenko, Miguel Berchelt, Alberto Machado, Orlando Salido, Christopher Diaz or Miguel Roman. Lomachenko just moved up in weight to lightweight, but Berchelt is still there. That’s who Davis should be fighting.