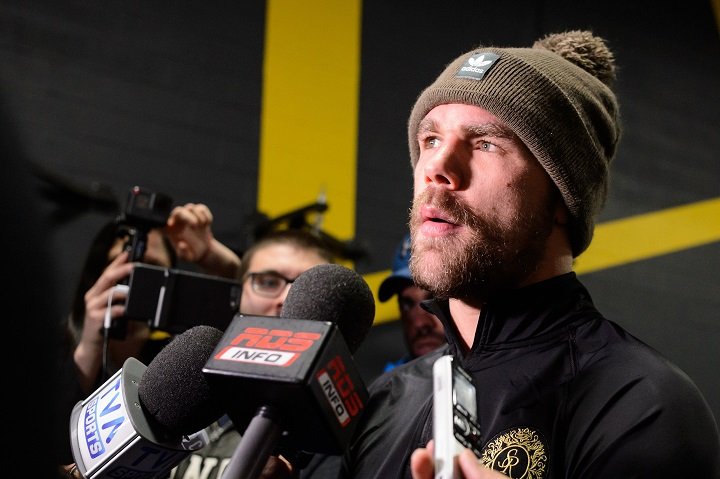 By Tim Royner: Billy Joe Saunders and his promoter Frank Warren are interested in putting together a fight against WBA Super World super middleweight champion George Groves if he’s unable to fight in the finals of the World Boxing Super Series tournament on June 2.

Groves’ health is still uncertain for the finals due to a dislocated left shoulder he suffered in his win last weekend against Chris Eubank Jr. in the 12th round of their semifinals match in Manchester. Groves fought most of the final round with his left shoulder dislocated, and it’s unknown what kind of damage he did to his shoulder socket by continuing to fight rather than having the contest stopped.

Saunders holds the WBO middleweight title, and he’s hoping to fight the winner of the rematch between Saul Canelo Alvarez and Gennady ‘GGG’ Golovkin. Saunders will have to wait 3 more months before he learns whether he’ll get the winner of that fight. If Canelo beats Golovkin, it’s believed that he’ll want no part of fighting Saunders.

Golovkin is the one that has expressed interest in the Saunders fight, but he needs to beat Canelo first. That’s a tall order for Golovkin, especially with the way the judges scored their last fight. Golovkin might need a knockout to beat Canelo.

”George has done well for himself, coming off of those losses that he had in his career. More importantly, for me, that fight has opened up another avenue,””I don’t know how his shoulder is and I hope his shoulder’s going to be ok. I know he’s going to fight Callum Smith [or Juergen Braehmer] in the final of this tournament. But if he can’t, Bill would go up to super middleweight and box him.”

If Groves is unable to take part in the finals of the World Boxing Super Series finals because of his shoulder injury, then it means he could be out for a while healing up. Hopefully, Groves wouldn’t require shoulder surgery to repair his left shoulder. It could amount to a long wait for Saunders to get a crack at Groves if he needs surgery. If Groves misses out on the finals of the WBSS tournament, he’ll still be in demand to fight the winner of the winner.

The tournament will be over, but the boxing fans will still be eager to see Groves fight the winner. Groves could potentially fight Callum Smith or Juergen Braehmer. If Groves’ replacement in the tournament is someone good like David Benavidez or Gilberto ‘Zurdo’ Ramirez, you can’t rule out them winning the WBSS tournament. That would make a good fight for Saunders to face one of those guys.

”We can make that fight,” said Warren.“We’d have no problem with that. Bill would want that fight, and I would want it for Bill. So there’s a good fight to be made there. George if you’re looking for the fight with Bill, we can do that. There’s a truckload of money for everybody to be made there. You guys could make some seriously good money,” Warren said.

Saunders has some good options at 168 besides Groves. He could fight former IBF super middleweight champion James ‘Chunky’ DeGale or Callum Smith. Those would be excellent fights for Saunders.

Groves (28-3, 20 KOs) hasn’t spoken about whether he’d like to fight Saunders or not. Saunders’ fighting style isn’t always the most appealing for a fighter like to let his hands go like Groves. Saunders is a slick fighter, who tries to make his opponents miss with their shots. Groves might end up frustrated if he has to chase Saunders around the ring for 12 rounds trying to land his punches. Groves will ultimately research Saunders’ past fights and make a determination on whether he wants to tangle with him. Groves won’t go into the fight blind to the way Saunders fights. Groves will know exactly what’s in store for him if he signs for a fight with Saunders.

Saunders (26-0, 12 KOs) will be defending his WBO middleweight title against #10 WBO Martin Murray (36-4-1, 17 KOs) in a voluntary defense on April 14 at the O2 Arena in London, England. This is supposed to be an easy fight for Saunders. It would be a major shocker if Saunders loses the contest. Murray, 35, has no pressure on him whatsoever, as he’s viewed as having no shot at beating Saunders. Murray is the old timer being given his 5th world title since 2011. It’s an absurd amount of title shots to be given to a fighter in this era of boxing. It shows that Saunders has been well connected with the right promoters. You don’t get that many title shots unless you have good promoters that can make the right moves.

”What a great fight for British fans as well. George is on a high after that. Bill’s on a high, he’s got to come through Murray first of all,” Warren said ”He comes through that, that would be a fantastic fight to put on.”

Wot a fight that would be the two @ChrisEubankJr conquerers ' George is a good man 1 day maybe 🇬🇧🇬🇧🇬🇧 pic.twitter.com/ERleQ4ITdo

Groves might not get around to fighting Saunders soon. If Groves wins the World Boxing Super Series tournament on June 2, he could be the one that winds up facing the Canelo vs. Golovkin 2 winner. There’s a lot of money for Canelo or Golovkin in facing Groves if he’s able to win the WBSS tournament. It would be a huge fight. Canelo has already fought at super middleweight last year against Julio Cesar Chavez Jr. at a catch-weight of 164.5 lbs. and he did really well. Canelo and his promoters at Golden Boy probably wouldn’t be able to get Groves to agree to melt down to a catch-weight of 164.5 lbs. That’s probably not going to happen. Groves is a big super middleweight, who doesn’t have an easy time getting down to 168. It would be a bridge too far for Groves to go down further to 164.5 lbs. to accommodate Canelo if he were interested in facing him if he wins the WBSS tournament.


« David Lemieux vs. Gary ‘Spike’ O’Sullivan possible for Canelo-GGG 2 card on May 5th