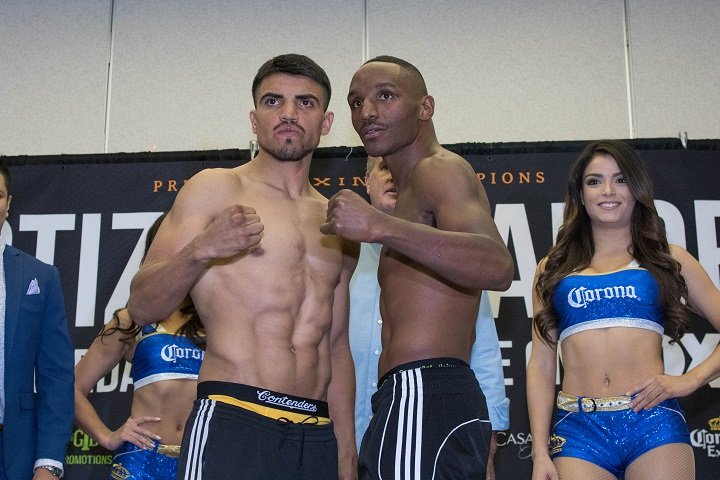 By Jim Dower: At Friday’s weigh-in, former WBC welterweight title holder Victor Ortiz (32-6-2, 25 KOs) weighed in at 146.4 pounds for his 12 round contest against former 2 weight class champion Devon Alexander (27-4, 14 KOs). Alexander weighed in at 146.6 lbs. Both fighters looked visibly thin at the weigh-in. Ortiz, 31, appeared to be the more drawn of the two, which isn’t surprising. Ortiz is a big fighter in between bouts.

Ortiz is looking for his second straight victory since being stopped by Andre Berto in 2016. Ortiz beat Saul Corral by a 4th round knockout last year in 2017. If Ortiz can fight like that against Alexander, he’ll have a good chance of winning. Alexander has boxing skills, a chin and decent power. He might be able to send Ortiz back to square one by giving him another loss. This is a time in Ortiz’s career where he can least afford a defeat, because he’s been beaten in 3 out of his last 6 contests. If he can’t defeat Alexander, who is coming off of a 2 year layoff, then it might be time for Ortiz to hang up his gloves.

Ortiz-Alexander will be taking place on Saturday night at the Don Haskins Convention Center, El Paso, Texas. The fight will be presented by Premier Boxing Champions on Fox and Fox Deportes.

Super middleweight Caleb Plant (16-0, 10 KOs) weighed in at 166.8 lbs. for his International Boxing Federation title eliminator against Rogelio ‘Porky’ Medina (38-8, 32 KOs). Unfortunately for Medina, he won’t have a chance to be the IBF mandatory, as he came in overweight at 168.8 lbs. If the 29-year-old Medina wins the fight, neither fighter will be the mandatory challenger. Only Plant has a chance to become the IBF mandatory.

Former WBA junior middleweight champion Austin ‘No Doubt’ Trout (30-4, 17 KOs) weighed in at 157.2 lbs. for his 8 round fight against journeyman Juan De Angel (20-7-1, 18 KOs). De Angel came in at 156.2 lbs. Trout, 32, has lost his last 2 fights to Jarett Hurd and Jermall Charlo. Trout is in a must win situation. He should be able to best De Angelo though. Trout made a mistake of fighting 2 very good fighters back to back in Charlo and Hurd, and he took too much time off after his loss to Charlo.

Junior middleweight contender Tony Harrison (25-2, 20 KOs) weighed in at 157 lbs. for his 8 round fight against journeyman George Sosa (15-11-1, 15 KOs). Sosa weighed 157 lbs. as well. Sosa has lost 7 out of his last 11 fights. He’s obviously being brought in as a confidence booster for the 27-year-old Harrison, who was stopped in the 9th round by Jarrett Hurd last year in February. Harrison came back from that defeat to decision Paul Valenzuela Jr. by an 8 round unanimous decision last October. 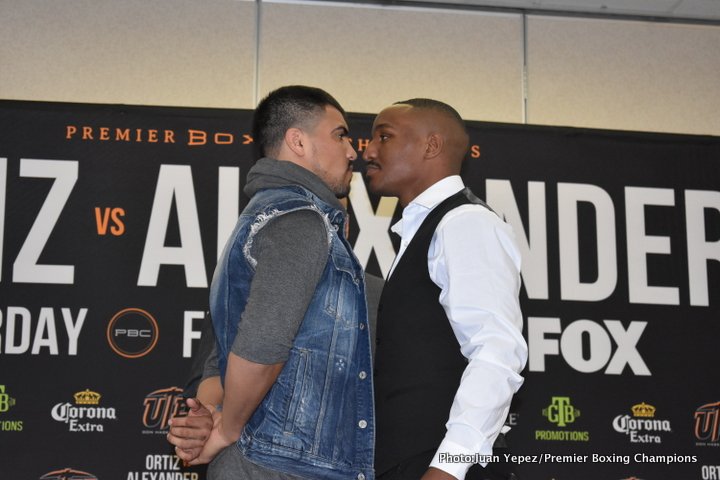