By Allan Fox: Omar Figueroa Jr. is looking good in training for his fight against Adrien ‘The Problem’ Broner on April 21. Figueroa is working on the heavy bag and concentrating on going to the body, which he’s expected to do against Broner all night long on April 21.

The 28-year-old Figueroa Jr. (27-0-1, 19 KOs) looks like he’s getting ready to chop the former 4-division world champion Broner (33-3, 24 KOs) apart in their important fight. Weight-wise, Figueroa Jr. is in good shape already and he still has over 2 months to go before April 21.

This will be the end for Broner if he loses to Figueroa. Broner’s career is not looking too good fight now. He lost his last fight against Mikey Garcia at 140 last July, and now he’s fighting Figueroa. You’ve got to respect Broner for being willing to take a tough test, but he has no other choice.

Showtime isn’t going to want to televise another tune-up level fight from Broner like we saw in his fights against Ashley Theophane, John Molina Jr. and Khabib Allakhverdiev. Even Adrian Granados was supposed to be a tune-up fight for Broner, and he appeared to lose that fight. You’ve got to hope for Broner’s sake that he can win so he can move on to bigger fights, but if he loses to Figueroa, it’s over for him. There’s no coming back from this for Broner.

The Broner-Figueroa Jr. fight will be televised on Showtime boxing. Broner is going to have to box like crazy for him to have a chance of winning this fight against Figueroa, who is such a busy fighter. Figueroa Jr. is busy and he can punch with good power. Usually guys with high work rates aren’t able to put a lot of power on their shots, but Figueroa Jr. is a different kind of fighter.

There’s over 10 weeks to go before Broner and Figueroa Jr. meet up on the 21st of April. It seems clear that both fighters are preparing for a fight that involves a lot of punches thrown. The difference is that Figueroa’s game is designed behind his high volume attack. That’s how Figueroa Jr. has always fought. Figueroa Jr. took apart Robert Guerrero in stopping him in round 3 last July.

Broner is more of a slapper, and he doesn’t have anywhere near the same kind of work rate as Figueroa. Broner is working hard to try and change his fighting style for the Figueroa Jr. fight, but it’s not likely that he’s going to be able to do that. It’ hard for a fighter to change their basic DNA of their fighting style, and it’s not realistic to assume that Broner will be able to change his game by the time he meets Figueroa on April 21.

Figueroa Jr. knows what he has to do for him to beat Broner. That’s work him over with his high volume attack. Broner has never been the type that has done well against fighters that have attacked him with volume. Marcos Maidana and Shawn Porter both defeated Broner by attacking him with nonstop punches. Daniel Ponce De Leon and Adrian Granados were both on the receiving ends up controversial decision losses to Broner in fights in which they easily outworked him. 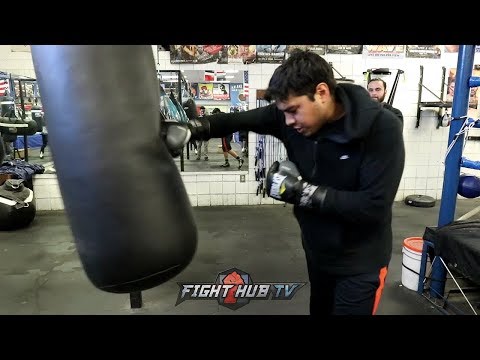 Anthony Joshua gets irritated when asked about Mayweather fighting in octagon »