Kellerman: Golovkin must pin Canelo to the ropes and keep him there 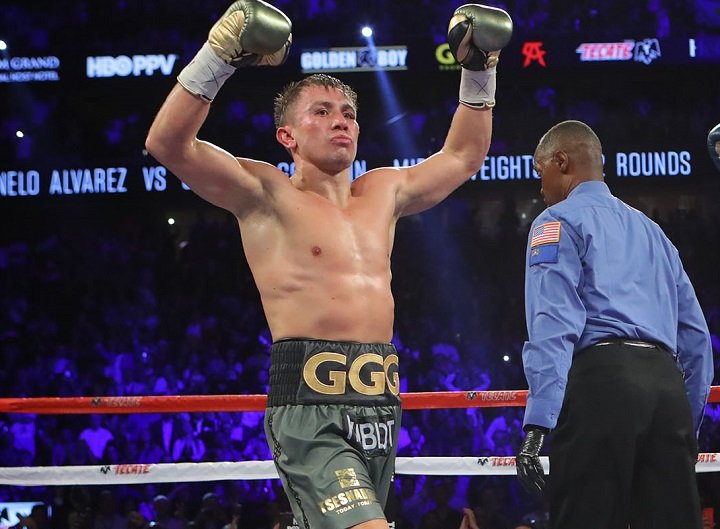 By Dan Ambrose: Max Kellerman thinks Gennady ‘GGG’ Golovkin needs to fight in the true Mexican style and not just talk about fighting in that manner in his rematch with Saul ‘Canelo’ Alvarez (49-1-2, 34 KOs) on May 5th.

Golovkin and his trainer Abel Sanchez frequently talk about their style of fighting being the ‘Mexican’ style,’ but we didn’t see that from the Kazakhstan fighter in his previous fight against Canelo on September 16th at the T-Mobile Arena in Las Vegas, Nevada. Golovkin used the Floyd Mayweather Jr. style of fighting, and that approach didn’t work with 2 of the judges [Adalaide Byrd and Don Trella] that worked the fight. They didn’t care for Golovkin’s pure boxing style, and they didn’t like when he slugged either, given the way the scored the rounds in which he brawled in favor of Canelo.

“Triple G is going to have to do what his trainer [Abel Sanchez] says is the Mexican style, but Triple G still has a lot of the Eastern European style with the straight up long distance stuff,” Kellerman said to ESPN’s First Take. “He’s really going to have to get into the Mexican style where you pin your guy to the ropes and don’t let him off, Triple G, if he wants to score a stoppage,” Kellerman said.

Kellerman is right. Golovkin is facing boxing’s No.1 fighter in Canelo, and he might not ever lose to any fighter by a decision now that the popular Floyd Mayweather Jr. has retired from fighting in the sport of boxing. Golovkin can beat Canelo, but he’s going to have to do it the old fashioned way by turning into Mike Tyson like fighter for the rematch on May 5th at a venue to be determined.

Golovkin let the fight with Canelo be too close last September by choosing to jab and stay on the outside. Golovkin probably didn’t realize that Canelo was stealing the rounds by moving along the ropes, and using his feet to avoid his pressure. The judges Byrd and Trella liked what they saw in Canelo, and you can bet that the next set of judges that work the Canelo-GGG rematch will like the same things from the Mexican star if he chooses to fight defensively.

Golovkin has to be willing to look bad in the early going from being countered by Canelo when the Mexican star is fresh and strong before he gasses out. Canelo will have the crowd cheering madly for him during those early rounds. But if Golovkin pushes a faster pace for the entire 12 rounds than he did last time, the crowd will soon have little to cheer for when Canelo gasses out badly and starts taking a beating. When Canelo’s face turns red and he has nothing left, then Golovkin will have the last laugh in battering the Golden Boy star until he either collapses on the canvas or the referee has to step in quickly to save the Mexican star from being badly hurt. We also could see Canelo’s trainers toss in the towel to save him.

It’s up to Golovkin whether he’s willing to push a faster pace for the rematch, because it’ll be tough at first in the first 3 rounds. Canelo will be at his best during that time. Once the fight hits round 4, Canelo will be done and he’ll be too tired to fight without him running and trying to get rest breaks like he did last time. If Golovkin doesn’t give Canelo space to flee like he did last time, then I see the fight ending quickly. Canelo will fall apart without his breaks.

Canelo is going to move a lot in the rematch with Golovkin because he has no other way of winning. Canelo can’t stand and fight Golovkin, because he’s not built to fight a rugged fighter with the kind of power and fast pace that the Kazakhstan fighter has. Canelo must move for him to survive, because he’ll never be able to fix his build limitations. Canelo and his boxing supporters will talk about how he’s going to throw more punches, and not move around the ring, but the reality is that he can’t fight any other way than what we saw from him last September. Canelo must fight like that.

“Well, they know each other. Canelo, the first 3 and the last 3 rounds were his best rounds,” Kellerman said. “Generally, in a rematch between a guy that comes forward and is maybe technical, but is really the aggressor is always able to win his way vs. a counter puncher, who is more versatile and has had 12 rounds to study his opponent. Usually the counter puncher has the advantage in the rematch. The more versatile boxer has the advantage in the rematch,” said HBO talking head Kellerman why he believes Canelo will beat Golovkin in the second fight.

Kellerman is giving Canelo a lot of credit for saying that he controlled round 1-3 and 10-12. That’s not what actually happened in the fight. Canelo fought well in rounds 1-2 and 12. Canelo was outworked badly by Golovkin in rounds 3-11. That’s 9 rounds, not 6 rounds, as Kellerman seemed to indicate. Kellerman said after the fight that he thought Golovkin won, but now he seems to be talking as if he believed that the fight should have been scored a 12 round draw.

What Kellerman says is true about the counter puncher and more versatile fighter having the advantage in the rematch. But what Kellerman doesn’t factor in is when the counter puncher and more versatile fighter has a major stamina problem like Canelo, and when they appeared to lose the first fight by an 8 rounds to 4 score with the press row. That kind of changes everything. Kellerman is talking about only one aspect of the Canelo-GGG fight but he’s forgetting about the important stuff about Canelo running out of gas in every round of the fight, and not being willing to stand long enough to win the rounds after round 2.

”I thought a good score in the first fight was anywhere from 6-6, a draw to 8-4 to Golovkin in rounds…6-6, 7-5 for Golovkin or 8-5 for Golovkin,” Kellerman said. ”All would have been OK. A draw was kind of reaching for Canelo, but he got it. Going in the rematch, however you saw Canelo do in the first fight, you have to be more optimistic about his chances in the rematch,” Kellerman said.

Kellerman somehow thinks Canelo will be able to do more in the rematch than he did last time. I wish I could agree with him, but I can’t. The fact of the matter is when you have a fighter with a major conditioning problem like Canelo, you get the same thing from them each time that fighter competes in terms of their conditioning. It doesn’t get better. If anything, it gets worse for them as they get a little older with each fight. Canelo is going to be the same in the rematch with Golovkin as he was last September.

The only one that has the ability to change for the rematch is Golovkin, because if he has the power to turn the fight into a close range war rather than the tactical boxing match that we saw from him last time. Canelo is what is what he is. He can’t change. Canelo doesn’t possess the cardiovascular system to change from fight to fight. If Golovkin presses a faster pace in the rematch, Canelo will gas out much faster and in a worse way than last time. The thing that will determine the outcome in the fight is whether Golovkin is able to knock Canelo out or not. If he can’t, then the judges will have their chance to score it, and then you’ve got to figure that it’ll be either a controversial loss for Golovkin or a draw. Canelo is a popular fighter and those types of fighters rarely get beaten by decisions. We saw Mayweather get away with a couple of fights in which he appeared to lose, but was given wins against Jose Luis Castillo and in his first fight against Marcos Maidana. Golovkin has got to try and KO Canelo if he wants to have his hand raised at the end of their fight on the 5th of May on HBO pay-per-view, because if it goes to a decision, I don’t see him being given the win.

Kellerman is going to find out quickly on May 5th that all his beliefs that he has about the counters and more versatile fighters winning rematches doesn’t apply to the Canelo-Golovkin 2 fight. When you have a fighter with an engine as bad as Canelo’s, that overrides everything that applies and puts him in the loser category. The only way Golovkin loses this fight is if he makes the same mistake he did last time in thinking he can win a decision, because I don’t think he can win that way against a star like Canelo. Golovkin can’t just beat Canelo. He has to knock him out in my opinion for him to get the win.

Danny Garcia says he’ll show off his talent on Feb.17 »