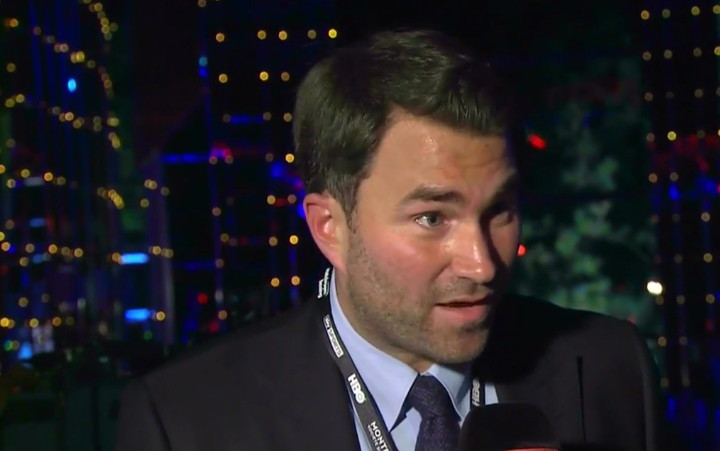 Hearn is hoping to hear an answer from the 29-year-old Butler by Thursday whether he’ll take the fight against the 25-year-old talent Rodriguez. If Butler does agree to the Rodriguez fight, he won’t be fighting on the undercard of Amir Khan vs. Phil Lo Greco on April 21 at the Echo Arena in Liverpool, England.

It would be too soon for Butler to fight, because he’ll need loads of preparation to get ready for Rodriguez, who isn’t the type of fighter you take on short notice. Rodriguez is a guy that might be the third best fighter in the 118 lb. division behind Zolani Tete and Luis Nery. Rodriguez looks far better than Ryan Burnett, Liborio Solis, Jaime McDonnell and of course Butler. It’s a mismatch in my view. Rodriguez is a much better fighter than Butler, I hate to say.

Hearn thinks it’s a nifty idea for Butler to fight Rodriguez, because it would mean the match would take place in the UK and there’s a chance that he might be able to somehow beat the Puerto Rican knockout artist. Burnett chose to vacate his IBF 118 lb. title after he was ordered by the International Boxing Federation to fight Rodriguez. That tells you a little something about how Rodriguez is viewed by Burnett and Hearn.

Burnett has chosen to take the arguably easer option of defending his WBA 118 lb. title against the twice beaten 31-year-old Yonfrez Parejo (21-2-1, 10 KOs) on March 31 on the undercard of Anthony Joshua vs. Joseph Parker at the Principality Stadium in Cardiff, Wales. Parejo was recently beaten by Zhanat Zhakiyanov. Burnett defeated him in his last fight by a 12 round decision last October. For some reason, Burnett chose not to fight Emmanuel Rodriguez. Now Hearn wants Butler to do what Burnett wouldn’t do in facing Rodriguez, who looks like more than a handful for anyone in the top tier of the division. If Butler says yes to the Rodriguez fight, he could be saying yes to a knockout loss, as the Puerto Rican fighter is knocking everyone out nowadays.

“It’s a great opportunity for Paul and Rodriguez is happy to travel,” Hearn said to skysports.com. “Paul and his team will make their decision in the next 48 hours but any time you get a chance to challenge for a world title in your own country, it’s difficult to say no.”

It’s interesting how excited Hearn is for Butler to take the fight against Rodriguez, but he wasn’t chomping at the bit to have Burnett fight the Puerto Rican talent. I wonder why that is? It’s OK for Butler to fight Emmanuel Rodriguez but not Burnett? If I’m Butler, I wouldn’t agree to fight Rodriguez in a million years. I’d sit and wait on the winner of the Jamie McDonnell vs. Liborio Solis rematch. Butler is ranked #6 by the World Boxing Association, so Hearn can easily match him against the winner of the McDonnell-Solis fight. If Butler faces Rodriguez, he’s probably going to get knocked out.
Butler previously held the IBF World bantamweight title after beating Stuart Hall by a 12 round split decision in June 2014. Butler lost the IBF 118 lb. title in getting stopped by Zolani Tete by an 8th round knockout in March 2015. Butler has won his last 9 fights since then. Butler recently beat Hall by a 12 round unanimous decision last September in a rematch.

It looks like Hearn is trying to create a future opponent for Burnett to fight a unification fight by offering Butler a fight against Emmanuel Rodriguez. Since Hearn believes the Butler-Rodriguez fight will take place in the UK, it makes me wonder whether he’s hoping somehow that Butler can win a decision. After all, the fight would be in the UK and Rodriguez might find it hard to get a decision win on foreign soil. The problem with that is Rodriguez brings his judges with him in the form of his 2 fists. This guy has so much power and talent that Butler might be little more than a snack for Rodriguez. He’s likely going to knockout Butler even faster than Tete did, so the judges won’t be needed in that fight.

I’d be very surprised if Butler agrees to fight Rodriguez, because it’s a bad match-up for the 29-year-old against a younger far more talented fighter. It’ll take a lot of courage for Butler to fight Rodriguez, because he’ll be so far out of his class in this match. The only thing Butler can hope for is he can drag the fight the entire 12 rounds and hope that he can win a hometown decision, because that’s the only way I see him winning. Rodriguez is not the type to leave it up to the judges. He’s going to look to KO Butler and make quick work of him. That might scare off Hearn, who probably isn’t going to want to put his young money maker Burnett in with a lion like Rodriguez after he does the job on Butler. I’m just saying.


« Deontay Wilder gives Parker advice in how to beat Joshua

Alexander Povetkin back in WBC rankings at No.4 »