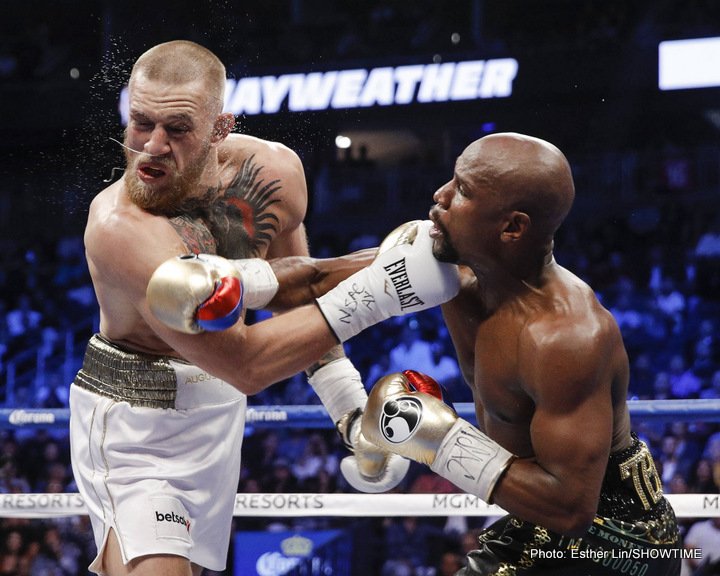 By Allan Fox: Floyd Mayweather Jr. says he could be getting a multi-billion dollar deal when he returns to action in either boxing or MMA. He’s not saying which sport he will return to, but is talking about him getting a ton of money if and when he does return.

Mayweather says he could be buying an NBA team in the future. If Mayweather, he’s going to need to come back to refill his bank account after he empties it buying an expensive team. Mayweather Jr. (50-0, 26 KOs) will be turning 41-years-old on February 24th, and he’s going to need to make his comeback soon before he ages out to the point where boxing and MMA fans no longer have any interest in seeing an old timer compete.

Mayweather looked slow in his last fight against Conor McGregor last August. The way Mayweather looked in that fight, he didn’t seem he had much left of his boxing skills. If he had been matched against a top fighter like Gennady Golovkin, Keith Thurman or Errol Spence, he would have been easy work for them.

“Will you guys ever see me in a boxing ring again? I don’t know,” Mayweather said to Forbes.com. “We don’t know if it’s a boxing ring, or maybe an Octagon. There’ve been talks about another multi-billion dollar deal. We’ll just see.”

It would be interesting to know who would sign Mayweather to a multi-billion dollar deal. Unless it was a 6-fight deal like the one he signed with Showtime Boxing, it wouldn’t make sense to pay Mayweather billions. If Mayweather loses his first fight of his contract, then the interest in his next fight would nosedive.

Mayweather seems to be only interested in Conor McGregor right now. Mayweather posted on Instagram a picture of him beating up a bloody looking McGregor in the octagon, which suggests that a rematch between will take place in the UFC. That’s the only realistic option that Mayweather and McGregor have if they fight again. They can’t fight another boxing match, because the fans aren’t going to want to pay to see another mismatch between Mayweather and a novice fighter. It’s a surprise that.

Mayeather and McGregor were able to get 4.3 million boxing & MMA fans to purchase their event last August, because it was a joke. It was always going to be a mismatch due to McGregor never having fought a boxing match in his life. Sure enough, McGregor looked like he didn’t have any business inside the ring with Mayweather.

“What’s next for me? New restaurants, NBA team — I’m thinking about buying an NBA team,” Mayweather. “Of course my real estate portfolio is amazing, billions in real estate. We all know that a boxer only makes money when he’s boxing. But with New York real estate, you make money when you sleep.”

Mayweather could make a lot of money if he returned to boxing, but it would have to be against a boxer this time. Like I said, the fans aren’t going to pay to see Mayweather beat up McGregor again. They’d pay to see them fight, but only in the UFC. For Mayweather to fight a boxer, he’d have to battle the winner of the Saul Canelo Alvarez vs. Gennady Golovkin fight. There aren’t any welterweights that are popular enough for Mayweather to fight. Manny Pacquiao is completely over-the-hill, and there’s no interest in the fans in a second fight between Mayweather and Pacquiao. That fight would never sell at this point. Terence Crawford isn’t popular enough and neither is Vasyl Lomachenko. The only guys that Mayweather could fight in boxing are Canelo and Golovkin, and those are fighters that would hurt Mayweather.


« Lomachenko not a priority for Gervonta Davis says Ellerbe