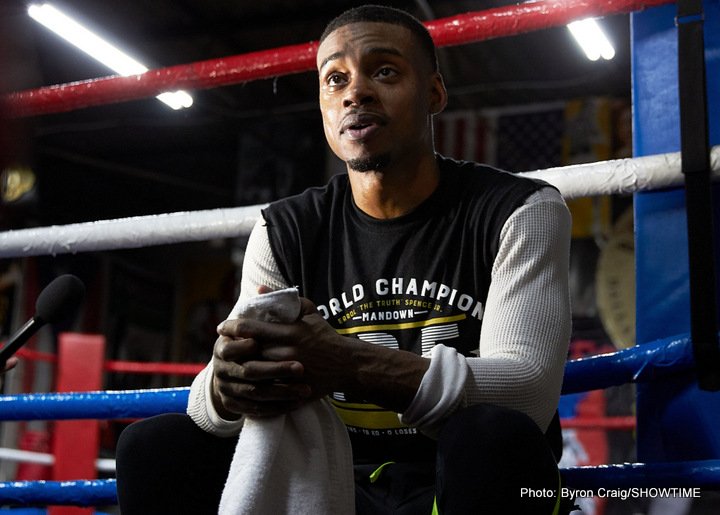 By Allan Fox: IBF World welterweight champion Errol ‘The Truth’ Spence Jr. (23-0, 20 KOs) will be defending his title against his mandatory challenger Carlos Ocampo (22-0, 13 KOs) on June in Dallas, Texas.

Boxrec has the Spence-Ocampo scheduled now, and it’s looking good for Showtime Boxing on June 6. This is a fight that Spence can’t put off, because the International Boxing Federation has ordered it.

This fight has knockout written all over it for Spence. Showtime will likely bring in poor ratings for the Spence-Ocampo fight, but you never know.

Perhaps some boxing fans will tune in just to see Spence smash an over-matched Ocampo on June 6th. The IBF obviously needs to do a better job of ranking fighters, so they can filter out guys with unbeaten records built on fluff opposition. The IBF could have ranked Jessie Vargas, Bradley Skeete, Devon Alexander or Yordenis Ugas at No.1, and it would arguably be an upgrade for Spence over Ocampo. I guess next time around one of those fighters will get a shot against Spence as the IBF’s next #1 mandatory.

Ocampo, who comes from Mexico, was going to fight Konstantin Ponomarev in an IBF 147 lb. eliminator fight. Ponomarev reportedly pulled out of that fight. Ocampo is getting the title shot against Spence anyway. It would have been nice to see Ocampo earn the title shot against Spence by beating a top contender. Ocampo comes into the fight with Spence with very few quality wins on his 6-year resume. In fact, Ocampo has no wins over contenders. His victories have come against journeyman and prospect level opposition.

Ocampo beat these domestic level fighters in the last 4 years: Dario Ferman, Daniel Echeverria, Alvaro Robles, Ramses Agaton, Charlie Navarro, Jorge Paez Jr., Johnny Navarrete, Uriel Gonzalez, Cruz Antonio Flores and Victor Fonseca. Those are mostly Mexican fighters that Ocampo’s management was able to match him against. Navarro used to be a welterweight contender 8 years ago, but by the time Ocampo fought him, he was well past his best years.

Spence defeated former world champion Lamont Peterson by a 7th round stoppage last month on Showtime on June 20th. That was Spence’s first title defense of his IBF 147 lb. belt that he won last year in May. Before the fight against Peterson, Spence was inactive for 8 months. He’ll have been out of the ring for 5 months by the time he faces Ocampo on June 6. Spence said he wants to fight 3 times in 2018. That might be possible if Spence’s management doesn’t lag on picking out his next opponent.

Spence, 28, must stay busy the best he can while he waits for WBA/WBC welterweight champion Keith ‘One Time’ Thurman to eventually face him. Thurman says the Spence fight won’t happen this year because he’s going to take a tune-up first on May 19th on Showtime, and then face either Shawn Porter or Danny Garcia later this year.

Spence wants to prove himself as the best fighter in the welterweight division, but the top guys aren’t in a hurry to face him. Shawn Porter and Danny Garcia are trying to fight Thurman and neither of them has shown an interest in fighting Spence. Jeff Horn and Terence Crawford are both with Top Rank, and that makes things complicated in terms of putting together a fight between Spence and one of those fighters.

Naoya Inoue installed at No.1 with WBA at bantamweight »