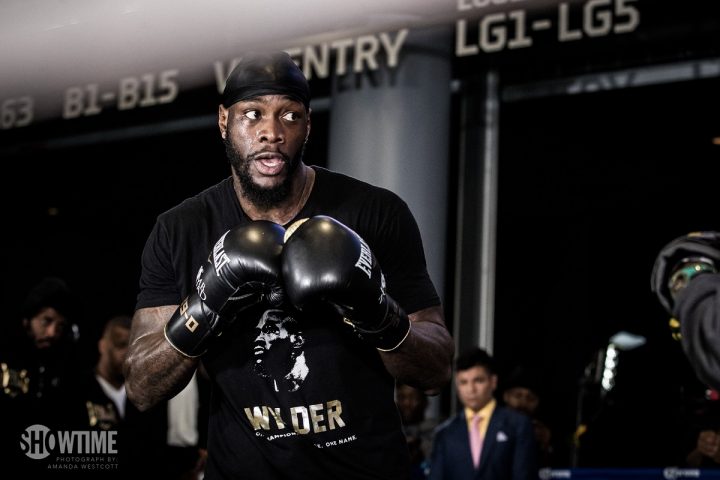 By Allan Fox: Luis ‘King Kong’ Ortiz (28-0, 24 KOs) will be knocked out in the 3rd round says WBC heavyweight champion Deontay ‘Bronze Bomber’ Wilder (39-0, 38 KOs) in predicting the results of their fight this Saturday night on March 3 on Showtime Championship Boxing at the Barclays Center in Brooklyn, New York.

It’s a good thing Wilder isn’t predicting a 1st round knockout, because that would be risky for him to accomplish that task. The southpaw Ortiz is a dangerous puncher, and Wilder, 32, doesn’t need to put himself at risk in getting clipped by one of the Cuban’s hard left hands in the 1st round.

Going for a knockout in the 3r round is dangerous a well for Wilder, considering that Ortiz is still strong at that point in his fights. The only time Ortiz appeared to gas out a little was in the later rounds of his fight against Malik Scott in November 2016. That fight went 12 rounds with Ortiz winning a wide decision after knocking Scott down 3 times in the fight. Scott was down in rounds 4, 5 and 9. That’s the only time in Ortiz’s 8-year pro career that he’s gone 12 rounds. Before that fight, Ortiz had gone 8 rounds on a couple of occasions.

“When I think about Luis Ortiz, I see threes. It’s a magical number. I see a third round knockout,” Wilder said. ”I’ve done what I’ve said so far, and I haven’t let anybody down. I will knock him out and then I will unify the division.”

Wilder will have to keep Ortiz from landing his big left hand for him to beat him. Ortiz has knockout power in his left only. His right hand is more of a slapping shot, which he doesn’t use that often. Like fellow Cuban Guillermo Rigondeaux, Ortiz is a one-handed fighter for the most part, and he mainly uses his left hand for his power punching. Wilder has been predicting victories in his fights, but he’s been facing a lot of flawed heavyweight. He’s not fought anyone in the class of Ortiz.

Wilder’s successful title defenses has come against these fighters: Bermane Stiverne, Gerald Washington, Eric Molina, Artur Szpilka, Johann Duhaupas and Chris Arreola. Those fighters are all fringe level guys rather than top 5 contenders. Wilder is fortunate that he hasn’t had to face anyone good that is risky.

The 6’7” Wilder might knockout Ortiz, but that doesn’t mean he’ll unify the heavyweight division. It takes 2 to tango, and IBF/WBA heavyweight champion Anthony Joshua and his promoter Eddie Hearn aren’t yet on board with setting up a fight with Wilder. Just when they will be open to a fight with him is anyone’s guess. First of all, Wilder will have to accept that he’s the B-side of the promotion for the Joshua fight for Hearn to even entertain making the fight with him. That means Wilder won’t get a 50-50 split of the money. At best, Wilder might get a 60-40 deal. More likely, he’ll be given a take it or leave it offer of 65-35. If Wilder rejects it, then Joshua and his promoter Hearn will walk away and continue to fight lesser heavyweights in front of large sold out crowds in football stadiums I the UK. Boxing is really big in the UK and Joshua’s 2012 Olympic super heavyweight gold medal validates him in the eyes of the fans.

“I don’t have any worries about Ortiz at all,” Wilder said. ”When I look at Ortiz, he doesn’t look powerful. I know he has nice skills like all Cuban fighters. That’s nothing to me. It’s going to be up to him to prove me wrong.”

Ortiz has gotten kind of chunky since he turned pro in 2010. As an amateur, Ortiz was lean and fast, but his physique has changed since he’s come to the U.S. He still doesn’t look fat at 242. That’s how much Ortiz weighed for his last fight against Daniel Martz on December 8. Ortiz stopped Martz in the 2nd round. Ortiz’s speed didn’t look good, but he got the job done. Ortiz might come into the Wilder fight a little bit lighter than in the past because this is a serious fight that he cannot afford to lose. It’s taken Ortiz 8 years just to get this title shot. If he loses to Wilder, he’s not going to have 8 years to work his way back to another title shot.

Ortiz’s age is a point of debate with a lot of boxing fans. Some believe he’s 38, as listed on his record, while other fans believe Ortiz is close to 50-years-old. If Ortiz is that old, he would be setting a record for being the oldest heavyweight ever to win a world title. Of course, if Ortiz doesn’t make an announcement about his age, then he won’t have the honor of setting the record. If Ortiz is 45 to 50, I doubt he’ll ever reveal it to the boxing public due to ageism. If boxing fans discover that Ortiz is that old, they might be less interested in his career. It’s hard to relate to someone that is old enough to be your dad.

“I am the best in the world. I’ve been saying it for years. Here is a big test. This is the fight that the fans have been waiting for. I’m going to pass this test with flying colors,” Wilder said about Ortiz.

Wilder isn’t considered to be the best in the heavyweight division. He’s viewed as No.2 behind Joshua. That perception won’t change on Saturday no matter how great Wilder looks in beating the 6’4” Ortiz. For Wilder to be seen as the best heavyweight in the division, he’ll need to beat Ortiz and then go on and defeat Joshua.

Wilder might even need to beat Dillian Whyte as well, because he’s probably the No.3 guy. Some fans think Jarrell Miller is No3. Tyson Fury is getting ready to restart his boxing career, but until he does, you have to rate Whyte and Jarrell Miller above him.

Wilder’s main competition is these heavyweights:


« Naoya Inoue installed at No.1 with WBA at bantamweight