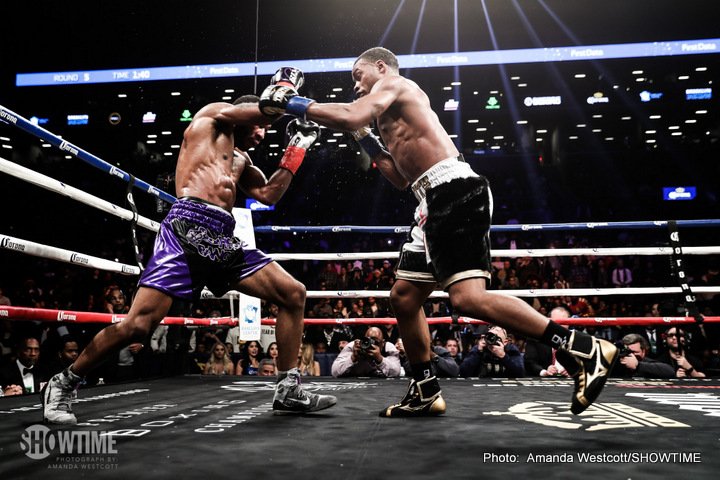 These aren’t the big numbers that some people thought Spence (23-0, 20 KOs) was capable of attracting for his voluntary title defense against the 33-year-old Peterson. Somehow, the boxing public was not enthralled with the Spence-Peterson fight for whatever reason, because averaging just 637K viewers on Showtime are not numbers.

Spence battered Peterson for 7 rounds until his trainer Barry Hunter let the referee Harvey Dock know that he wanted the fight stopped after round 7. Peterson had nothing from round 1 until the bitter end.

It was easily the worst performance of Peterson’s career, because even in his past losses to Lucas Matthysse, Danny Garcia and Tim Bradley, he was a lot more aggressive and willing to let his hands go. Against Spence, Peterson looked lethargic and unable to pull the trigger on his punches. Peterson fought like a 100-year-old man inside the ring. He wouldn’t throw punches, and he was just looking to survive.

Spence, 27, is supposed to be the replacement for Floyd Mayweather Jr. as boxing’s next superstar, but his ratings have yet to be consistently high. To be a star, Spence needs to draw huge numbers on a consistent basis.

WBC heavyweight champion Deontay Wilder’s rematch with Bermane Stiverne brought in 887,000 viewers, and that was considered disappointing. Over-the-hill former 4-division Adrien Broner brought in better numbers for his fight against Adrian Granados last year. Spence isn’t even at the level where Broner is at, and he has a better career going at the moment.

One thing that might have hurt the Spence-Peterson ratings is the way that Spence and Peterson sleep walked through the entire promotional events. The press conferences were real snoozers with neither fighter having much to say. Both fighters were being nice to each other, and it was boring to watch. Spence looked sleepy all the time, and he showed no interest in trash talking Peterson.

If Spence is going to turn into the star that replaces Floyd Mayweather, then he needs to take lessons from him when it comes to the trash talking department, because he’s far too nice to his opponents. I don’t think Spence fully understands the importance of him trash talking his opponents.

Spence needs to be matched against better opposition than Peterson. As long as his management are matching Spence against fighters like Spence and Carlos Ocampo [his next opponent], it’s going to be hard for him to take his career to the next level to draw big ratings. The boxing public wants to see Spence fight guys like Keith Thurman, Danny Garcia, Mikey Garcia, Terence Crawford, Shawn Porter, Amir Khan, Kell Brook, Adrien Broner and Jeff Horn. They’re not interested in seeing Spence fight inactive fighters like Peterson. That was a waste of a fight for Spence.


« Deontay Wilder and Jermall Charlo look to shine on March.3