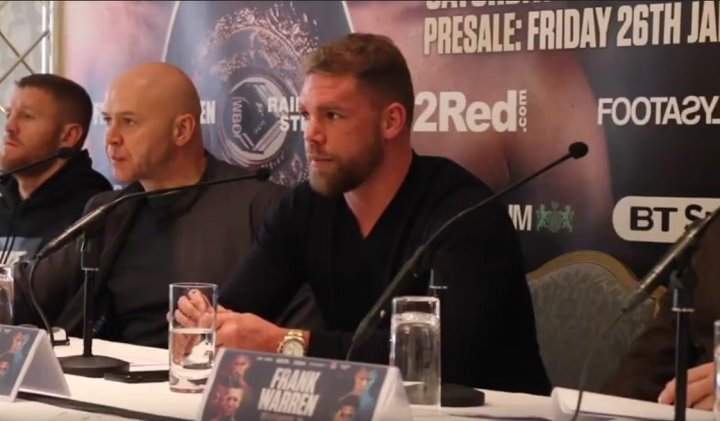 By Marcus Richardson: Billy Joe Saunders (26-0, 12 KOs) is beginning to suspect that he may not get a fight against the winner or the loser of the May 5th rematch between IBF/IBO/WBA/WBC middleweight champion Gennady ‘GGG’ Golovkin and Saul Canelo Alvarez.

Saunders will be defending his WBO middleweight title against Martin Murray (36-4-1, 17 KOs) on April 14 at the O2 Arena in London, England. Saunders views the fight with Murray as one that will keep him in position to fight the winner of the Canelo-Golovkin fight. However, beating Murray might not help Saunders’ case in getting either of those guys. If they don’t want to fight Saunders, then it won’t mean anything if he beats the35-year-old Murray. Saunders can’t worry about that though. He needs to win the fight, and look impressive in doing so. It wouldn’t hurt if Saunders stood in the trenches and turned the Murray fight into an old fashioned war. If Saunders is confident of still winning the fight by battling Murray in that manner, he should do it, because it might help his chances of getting Golovkin or Canelo to agree to fight him in 2018.

Saunders believes that the handlers for the 27-year-old Canelo, Golden Boy Promotions, want nothing to do with him. He also believes that Golovkin’s management wants nothing to do with him either. The reason for that is the way that he fought in beating former IBF middleweight champion David Lemieux on December 16th in Quebec, Canada. Saunders used a great deal of movement in boxing Lemieux for 12 rounds. Saunders’ fighting style was very similar to Erislandy Lara, a fighter known for being a spoiler. After Canelo struggled to beat Lara in 2014, he’s been ignored by Golovkin and Golden Boy. Saunders might have ruined his own chances of fighting Canelo and Golovkin by fighting defensively against Lemieux. In that respect, Saunders won the battle against Lemieux, but he may have lost out on the bigger prize of fighting Canelo or GGG.

“If it goes to points, I think Canelo might get it on points,” Saunders said to Behind The Gloves in discussing the possible outcome of a Canelo-Golovkin 2 rematch. “It’s hard to beat Canelo on a Golden Boy show on points. Frank [Warren] clearly knows when someone wants to fight and when they don’t, and it looks like Canelo is not interested,”Saunders said.

Canelo has never shown any interest to fight Saunders in the past. Canelo’s view on a fight against Saunders likely hasn’t changed much regardless of how he fought against Lemieux. There’s no money in Canelo fighting Saunders. Canelo fought another less than popular UK fighter in Liam Smith in 2016, and the fight drew only 300,000 pay-per-view buys on HBO in the United States. If Canelo fights Saunders, he could lose as much as 700,000 buys compared to if he were to fight one of the top middleweights that the U.S boxing fans would be interested in paying to see him fight.

U.S fans would like to see Canelo fight Jermall Charlo, Errol Spence, Keith Thurman or Danny Jacobs. They probably wouldn’t have any interest in seeing Canelo fight Saunders. If Canelo is going to fight a UK fighter, it would probably be the winner of the World Boxing Super Series super middleweight tournament. If George Groves or Chris Eubank Jr. win the tournament, then Canelo might look at fighting one of them. I doubt it though, but you can argue that one of them would bring in bigger PPV numbers on HBO fighting Canelo in the States than a fight between him and Saunders.

Canelo is more of a business man when it comes to him and his promoters at Golden Boy Promotions picking out opponents to fight. Saunders is not popular enough, and his style is not right for Canelo to be interested in fighting him. Golovkin is Saunders’ best and perhaps only chance of getting a big fight in the foreseeable future. Golovkin cares about winning all the middleweight titles. So as long as Saunders has the WBO 160 lb. belt in his possession, he’ll have a chance to potentially get a fight with GGG. Once Saunders loses his WBO strap, he’ll no longer have any chance of fighting Triple G.

Saunders is right about Canelo likely beating Golovkin in their rematch on May 5. The general belief by boxing fans is Golovkin will lose to Canelo if it goes to points, because he’s not as popular as him and the judges won’t give him the decision. Saunders sees it coming down to Golovkin not getting a decision win because of it being a Golden Boy promoted card. Saunders believes that Golovkin was robbed in his fight last September against Canelo. The judges in Las Vegas scored it a 12 round draw, but Saunders saw it as a clear win for Golovkin by 8 rounds to 4. That fight showed Saunders that Golovkin won’ t be given a decision over Canelo. Saunders might find himself in the same boat if he ever fights Canelo. There’s little chance that Canelo will come to the UK to fight Saunders. So, if a fight between them did take place, it would be in the U.S, and likely in Las Vegas. If Erislandy Lara wasn’t able to get a decision win by out-boxing Canelo in 2014 in Vegas, it could prove to be just as difficult for Saunders to get a decision as well.

”100 million percent,” Saunders said when asked if he’ll be the undisputed middleweight champion in 2018.

Saunders seems to be forgetting that he might not be able to fight Canelo or Golovkin. If he can’t get a fight against either of them, then he won’t be able to prove that he’s the best fighter in the 160 lb. division in 2018.

“I’m not saying they’re [GGG and Canelo] scared, because they’re warriors, bust there’s just something about me that most people want to steer clear of now,” Saunders said on Thursday at his press conference for Murray fight. “The Canada performance (against Lemieux) was good in one way and bad in another because it was good for my stock but bad for business. Golovkin and Canelo are not scared, but the people looking after them, they [GGG and Canelo] are their cash cows. They’re the ones bringing the money in, so they don’t want someone coming in and giving them a hard night’s work or beating them,” Saunders said.

Saunders used a little too much movement against Lemieux in winning the fight. Golden Boy Promotions president Eric Gomez commented after the Saunders-Lemieux fight that he was surprised at how much “running” Saunders did in beating Lemieux. Golden Boy promotes Lemieux, so they had a lot of interest in the results of that fight. Saunders should have slugged more with Lemieux to make himself look vulnerable if he believed that he had the punch resistance to take his shots. Saunders was never going to be able to entice Canelo to fight him because of his WBO middleweight title or because of his popularity. Saunders is not a popular fighter in the UK, and Canelo is not interested in collecting all the titles in the 160 lb. division the way Golovkin is. The main reason Canelo is not interested in winning all the titles at middleweight is because of the frequent mandatory defenses he would need to make against fighters that aren’t marketable. Canelo can make a lot more money by not holding down titles, and focusing instead on fighting guys the boxing public wants to see him fight like in his past fights against Amir Khan, Floyd Mayweather Jr. and Julio Cesar Chavez Jr. 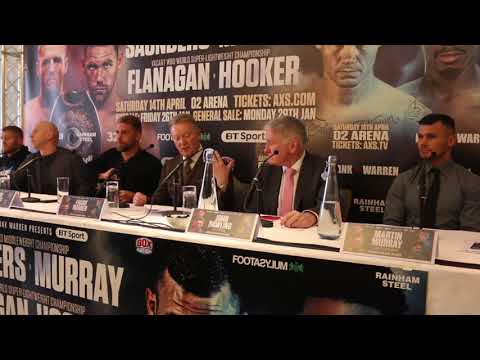 Hearn worried Joshua-Fury fight will be difficult to negotiate »