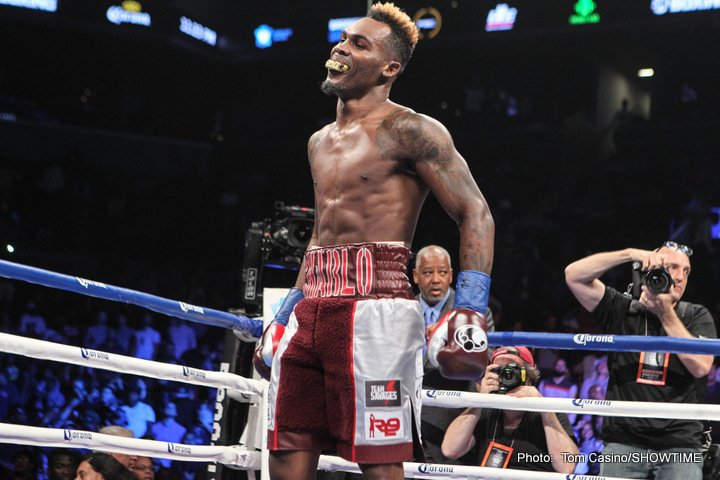 Ali (26-1, 14 KOs) is expected to defend his WBO junior middleweight title next against mandatory challenger Liam ‘Beefy’ Smith (26-1-1, 14 KOs) next if possible. The end game is likely a fight against former IBF welterweight champion Kell ‘Special K’ Brook, who just moved up in weight to the 154 pound division, and he wants to face Sadam Ali.

Here’s what Jermell Charlo said on his Twitter on Friday:

”I Got A Plan.. Since Hurd & Lara Beefed Up, Let Them Fight.. The Winner Fights Me After I Destroy The Gifted 147LB Who Got A Blessing From Cotto (Ali) ONLY ONE CHAMPION.. WHO YOU GOT WINNING”

Showtime vice president Stephen Espinoza retweeted Charlo’s Tweet, which suggests that he’d like to see Charlo face Sadam Ali. Unfortunately, Golden Boy Promotions don’t seem to be as eager to make that fight as Espinoza. They have other ideas for Ali. It’s too bad that Golden Boy Promotions isn’t interested in letting the 27-year-old Charlo (30-0, 15 KOs) face Sadam Ai in a unification fight because it would give him a chance to show off his punching power and talent for the world. Charlo’s recent 1st round knockout win over Erickson Lubin (18-1, 13 KOs) on October 14 was an impressive victory for him. Charlo knocked out Lubin with a single right hand to the head. There was no chance whatsoever for Lubin to get back to his feet to resume fighting, as he was too hurt to continue fighting.

”Not in our immediate plans, but possible,” Gomez said to Michael Wood of badlefthook.com. “Won’t know till Monday,” Gomez said about Sadam Ali possibly facing Liam Smith next.

If Ali wasn’t facing Liam Smith next, he still likely wouldn’t be facing Jermell Charlo next, as Golden Boy would probably look to make the Ali-Brook fight. That’s a match-up that would make money in the UK due to the pay-per-view apparatus over there with Sky Box Office PPV in the UK. There’s no PPV for a fight involving Jermell Charlo facing Sadam Ali in the U.S. You can’t sell that fight to the U.S boxing fans, because they wouldn’t buy.

Ali recently won the WBO junior middleweight title last month in pulling off a huge upset in defeating the injured Miguel Cotto by a 12 round unanimous decision on December 2 on HBO Championship Boxing at Madison Square Garden in New York. Ali was supposed to lose that fight, but he took charge of the match in outworking the aging 37-year-old Cotto by the scores 116-112, 115-113 and 115-113. That was Cotto’s retirement fight from boxing.

Jermell’s twin brother, former IBF junior middleweight champion Jermall Charlo, moved up to the middleweight division, and he plans on fighting Hugo Centeno Jr. soon for the interim WBC 160lb. title. The winner of that fight will be in position to face WBC middleweight champion Gennady ‘GGG’ Golovkin if he gets past Saul Canelo Alvarez in their rematch on May 5.

Sadam Ali, 29, isn’t a true 154 lb. fighter, and he doesn’t belong in that division. It’s only a matter of time before Ali is knocked out and sent packing. A fight between Ali and Jermell Charlo would be a terrible mismatch in my view. I couldn’t see Ali even beating Lubin. Ali is little more than a 147 lb. fighter, who moved up in weight and beat an over-the-hill and extremely ring rusty Miguel Cotto. If Cotto had been a little more active with his career in the last 5 years, he would have beaten Ali. Cotto’s loss to Ali was more of an example of what happens to wealthy fighters that stop being active. Once guys stop competing on a regular basis, they wind up getting beaten by less than the best.

Jermell Charlo needs to follow his brother Jermall Charlo up to the 160 lb. division, as there’s nothing for him at 154. He’s friends with WBA junior middleweight champion Erislandy Lara, so the chances of him facing him are low. It looks like Hurd is fighting Lara next. If Hurd beats Lara, then a fight between him and Jermell would make sense. But if Lara wins, which is likely, then there’s little chance that Jermell will fight him.