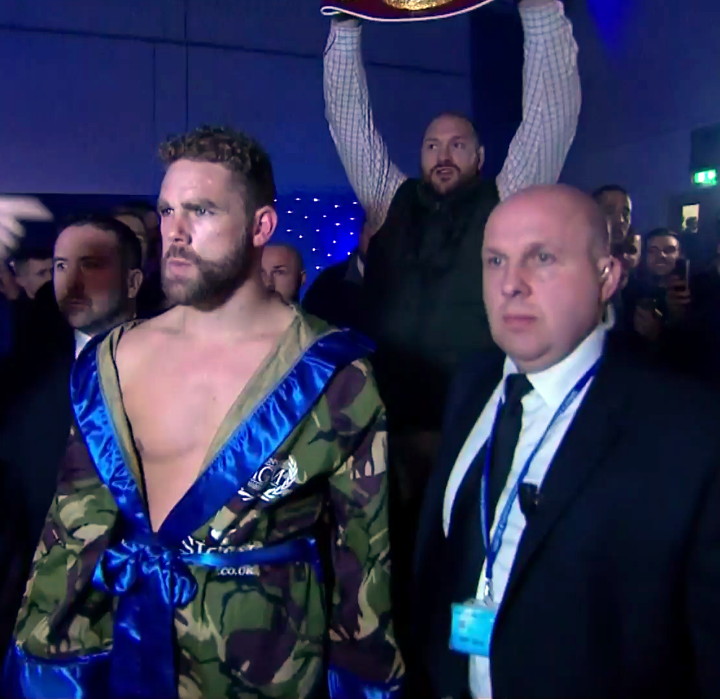 The 28-year-old Saunders, for some reason, is now facing nothing but former leftover knockout victims from Triple G, and it’s more than a little disbursing. Saunders’ last 2 title defenses have come against David Lemieux and Willie Monroe Jr. Those are 2 fighters that Golovkin knocked out in in the recent past. Lemieux was an 8th round TKO victim to GGG in October 2015. Monroe Jr. was stopped in the 6th round by Gennady in May 2015. Saunders couldn’t do anything with them other than out-box them in going the full 12 rounds to beat them. Saunders doesn’t possess the punching power to knockout top fighters. He’s strictly a finesse guy, and if he’s going to win, it’s going to be by a decision only. Believe it or not, the last time Saunders knocked out one of his opponents was 3 years ago when he stopped journeyman Yoann Bloyer in the 4th round at light heavyweight in July 2015. Saunders weighed at a bloated 173 pound for that fight. That’s a crazy amount of weight for a middleweight to be weighing in at, but it kind of shows you how Saunders’ discipline has been kind of lax over the years when it comes to his training. Saunders looks fat in that fight, and in terrible condition to be competing.

“Martin Murray is a good fighter and I have got the greatest of respect for him,” said Saunders. “But he’s in the way of what I’m aiming for this year and that is to become undisputed middleweight world champion.”

I wouldn’t be surprised at all if Murray fails to get the winner of the Canelo-GGG rematch. I don’t think Golovkin will get the victory over Canelo. This is boxing, and the sport is a business and I don’t think Golovkin can win a decision over a popular guy like that. If Golovkin doesn’t KO Canelo, he’ll lose the fight no matter what happens in my opinion. Canelo probably will turn up his nose at going after a runner like Saunders, because the fight won’t bring in money and the WBO belt won’t increase his popularity in the U.S. Casual boxing fans won’t care if Canelo beats Saunders to add his WBO trinket to his collection. Just having 1 world title is enough to impress casual fans. Adding yet another title when you have 3 of them, it’s overkill. Canelo will be fine with the IBF, IBO, WBA and WBC middleweight titles he gets off of Golovkin on May 5. As the loser, Golovkin might be interested in going after Saunders if Canelo chooses not to fight him. Personally, I think it would make Golovkin look bad in going after Saunders after a loss to Canelo. It would make Golovkin look weak in fighting for the WBO strap under that kind of scenario. Golovkin would be better off showing the U.S boxing fans some real courage by looking to face Charlo, Derevyanchenko or Jacobs. Charlo and Derevyanchenko would make for exciting fights against GGG. Jacobs wouldn’t be as interesting, because he did a lot of moving in his fight with Golovkin last year in March. Jacobs followed the Kell Brook blueprint for his fight with GGG in 2016. The blueprint didn’t work, but it made Golovkin chase him around the ring for most of the fight. Golovkin might not want to fight Saunders if he gets beaten by Canelo, as it would put him in a position where he’d be made to look like he’s going after the weak link among the champions at 160. I mean, I don’t want to drizzle on Saunders’ parade, but the guy is viewed as a paper champion by many boxing fans. They don’t see Saunders as a real champion. They see him as the belt holder, who won his WBO 160 lb. strap against a flawed fighter in Andy Lee in December 2015. The hardcore boxing fans haven’t missed the fact that Saunders has been facing easy marks in defending his WBO strap in the last 2 years against these fighters:

Saunders vs. Murray will be televised on BT Sport and BoxNation in the UK. It’s still unclear where the fight will be staged. It was originally thought the fight would take place in London, England, but it still hasn’t been confirmed.

It’s still too early to know who Saunders will be facing in his next fight after his title defense against Murray, but it wouldn’t be surprising if he winds up facing Saul Canelo Alvarez in September. The only way that happens is if Canelo defeats Golovkin on May 5 in their rematch. The fight still hasn’t been negotiated, but it’s expected to in the next 2 weeks. The Canelo-Golovkin negotiations can’t drag on too much further without impacting both fighters, especially Golovkin, who would need to try and get an April date on HBO if the Canelo rematch fails to take place. Since Canelo has talked mostly in negative terms towards Saunders in the past, it’s not a sure thing that a fight between them will take place in September or at any time in the future. Canelo has already fought a runner before in Erislandy Lara, and I doubt that he’s going to want to bother with another one in Saunders. The WBO belt Saunders holds does nothing for Canelo. He found out recently that the boxing fans don’t care about him winning paper titles when he defeated WBO junior middleweight champion Liam Smith in September 2016. Even though Liam Smith was a belt holder with his WBO 154lb. strap, the U.S boxing public failed to purchase the Canelo-Smith fight in high numbers on HBO PPV. The fight brought in anemic PPV numbers with around 300,000 fans purchasing the fight. As such, it doesn’t do anything for Canelo to beat a paper champion like Billy Joe Saunders. It’s a wasted fight date for Canelo with him making far less money than he could make facing the likes of Daniel Jacobs, Jermall Charlo, Golovkin, Errol Spence Jr. or Sergiy Derevyanchenko. I threw in Spence’s name because he recently said that he’d be interested in facing Canelo next. Just by Spence mentioning that he’s interested in facing Canelo next, it has likely caught the attention of the Mexican star’s promoters at Golden Boy Promotions, who now may see him as a very real future option for their fighter. Putting Canelo in with Spence sure beats the heck out of putting him in with Charlo, Jacobs or Derevyanchenko. Those guys are all tough outs, and there’s no guarantee that Canelo beats any of them. Even if Canelo does, those won’t be easy fights for him. The reason I’m mentioning those fighters for Canelo is that Saunders is not a lock to get a fight against the Golden Boy star. That’s one guy that Saunders might not be able to add to his list of former Golovkin opponents.

Martin Murray sounds a little deluded about his past losses and draw in his failed past 4 attempts at winning a world title. Murray thinks he was robbed.

“I’ve fought everyone and in my opinion at middleweight I have only one genuine loss, which is against Gennady Golovkin who is the best out there,” said Murray. “I don’t count Martinez or Sturm as genuine losses because of the scorecards.”

How sad that Murray can’t own the fact that he was beaten and found lacking in the talent department in his title challenges against Arthur Abraham, Felix Sturm and Sergio Martinez. I saw all those fights, and I couldn’t give Murray the win in any of them. He should have lost to Sturm in their 12 round draw in 2011. Murray spent too much of the fight covering up and not enough time throwing punches. It was the same thing in Murray’s 12 round unanimous decision defeat to former WBC World middleweight champion Sergio ‘Marvilla’ Martinez in April 2013 in Buenos Aires, Argentina. Murray fought like a sparring partner in that fight, covering up and letting Martinez unload on him with punch after punch. In a few of the later rounds, Murray threw a handful of punches, but not nearly enough to get the decision. The thing is, Martinez wasn’t at his best in that fight. He had torn up his right knee in his fight against Julio Cesar Chavez Jr. 7 months earlier on September 15, 2012. Martinez had surgery on his knee, and he came back too quickly to defend his title against Murray. Moreover, during the Murray fight, Martinez suffered a hand injury, which limited his ability to sit down on his punches in the fight. It didn’t keep Martinez from unloading on Murray with a high volume attack, however, which is the reason he won the fight. Martinez simply outworked Murray, forcing him to hide behind his clam-shell high guard for 12 rounds. If Murray wants to think that he only has one true loss in his 4 attempts at fighting for a world title, then you have to let him keep vision in his head. Unfortunately, that’s not how the fans see it. All they know is Murray tried 4 times to win a world title and he failed each time, and now he’s getting a gift 5th title shot against Saunders. What did Murray do to earn the title shot against Saunders? That’s a good question. As far as I can tell, it looks like Murray’s loss to George Groves. It certainly can’t be Murray’s controversial 12 round unanimous decision win over Gabriel Rosado in 2017 or his win over obscure fighters Nuhu Lawal and Arman Torosyan.