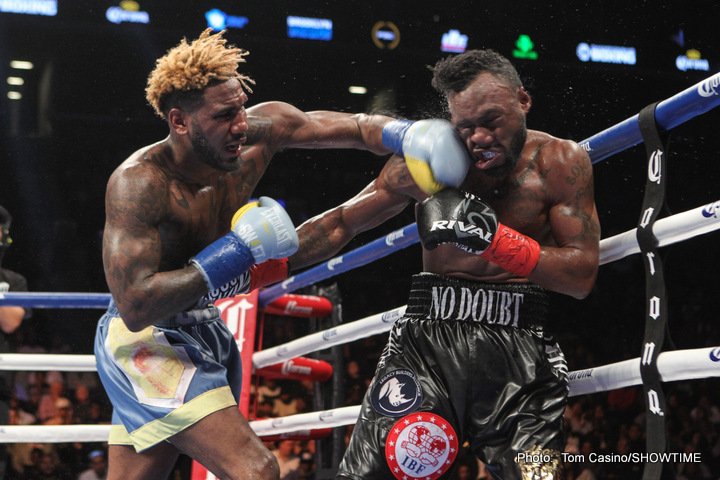 By Jeff Aranow: Former WBA junior middleweight champion Austin ‘No Doubt’ Trout (30-4, 17 KOs) will be fighting next month against an opponent still to be determined on the undercard of the “Vicious” Victor Ortiz vs. Devon Alexander welterweight clash at the Don Haskins Center on the UTEP campus in El Paso.

Trout’s fight is expected to be a tune-up level match to get him back to his winning ways. Trout, 32, has lost 2 in a row to IBF World 154lb champion Jarrett Hurd and Jermall Charlo. Trout was stopped in 10 rounds by Hurd in his last match on October 14 on Showtime Boxing at the Barclays Center in Brooklyn, New York. Trout gave a valiant effort against the bigger, stronger and younger 27-year-old Hurd, but ultimately he didn’t have the physical tools to win this one.

The loss for Trout knocked him out of the top 15 with 3 of the sanctioning bodies at 154. The World Boxing Council still has Trout ranked in their top 15 at the No.13 spot. Trout will need to win his next fight on February 17 for him to stay in the WBC’s top 15. Trout cannot afford to lose to whoever is put in with him.

Given that Trout’s opponent still hasn’t been picked out for him for his fight on the Ortiz-Alexander card, it’s likely that it’s going to be a low level opponent, and not a true threat to beating him. That’s fine. Trout should have taken an easier fight after his grueling 12 round unanimous decision loss to former IBF junior middleweight champion Jermall Charlo on May 21, 2016. Fight in back to back world title fights against big punchers was a mistake for Trout. The money was obviously

“I’m looking forward to fighting close to home,” said Trout. Many of you know I was born here in El Paso and grew up right across the road in Las Cruces, New Mexico. To be here again is surreal and it’s even more special being on a great card like this,” said Trout.

Trout is still young enough to capture another world title once WBC champion Jermell Charlo and IBF champ Jarrett Hurd move up to middleweight. Those fighters are huge for the 154lb. weight class. They won’t be able to stay in that weight class for too much longer before they need to make the move to 160. Once they’re gone, Trout will have a good chance to pick up a belt.

Ortiz-Alexander will be televised on Premier Boxing Champions on FOX and FOX Deportes. The co-feature bout is Caleb Plant fighting Rogelio “Porky” Medina in a super middleweight fight. That’s not a great fight, as neither of those fighters will likely ever win a world title. It would have been better to put Trout in the co-feature, even against a 2nd tier fighter. Trout at least is guy that has the potential to win a world title when matched against the right fighter.

I would pick Trout to defeat WBO junior middleweight champion Sadam Ali. I don’t see Medina or Plant ever winning a world title at 168. Medina has already been beaten many times in his career, and Plant is completely flawed as a fighter. Plant is a good undercard fighter, but I don’t see him as a co-feature type talent.