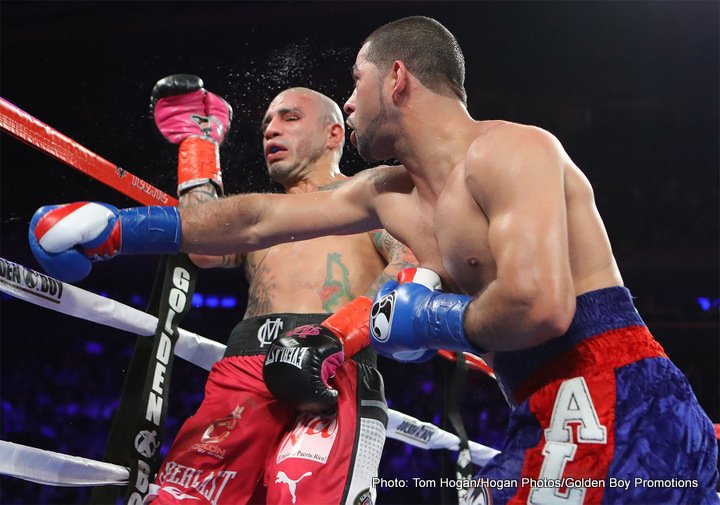 This was not the Cotto that we’d seen in his best years. Ali exposed Cotto’s age from the outset, making him look slow and cumbersome inside the ring. If this had been Gennady Golovkin inside the ring with Cotto, it could have been a massacre. Cotto obviously knew his own limits, which is probably why he never fought Golovkin.

The positive that came out of the fight for Cotto was he didn’t get knocked out. Cotto ended his career on his feet in losing a decision to Sadam Ali. If Cotto had fought Golovkin, it’s not hard to imagine that he would have knocked out by him fairly quickly.

Cotto suffered an injured left biceps in the 7th. The younger 29-year-old Ali took advantage of the injury to dominate the last part of the fight to win a close decision. Cotto was lucky that he didn’t fight middleweight champion Gennady Golovkin last Saturday night, as it could have ended badly for him. Golovkin would have been a bridge too far for Cotto regardless of what condition he was in for the fight.

In the early rounds before Cotto injured his left biceps, he didn’t look like he had the talent that he possessed 2 years ago in his fight with Saul Canelo Alvarez. Cotto’s deterioration was masked in his previous fight against Yoshihiro Kamegai, because he was facing a less than stellar opponent.

Golovkin wished Canelo luck before the fight, telling him “too bad we never fought when you had the WBC 160 pound title.” Golovkin wanted to fight Cotto 2 years ago when he held the WBC middleweight belt after his stoppage win over Sergio Martinez in the previous year. Cotto went after easier game than Golovkin in defending his WBC belt against Daniel Geale and then against Canelo. Cotto lost his WBC belt against Canelo.

Cotto was a smart fighter in picking opposition during his career. He generally opted for safer fights unless he was facing guys that offered huge payday for him like Antonio Margarito, Floyd Mayweather Jr. and Canelo. We never saw Cotto in with Golovkin, Jermell Charlo, Jermall Charlo, Erislandy Lara or Demetrius Andrade. Those were guys that would have been tough matches for Cotto.

Cotto is retiring at the right moment in his career. Had he stayed too long and mixed it up with Canelo again or fought Golovkin, it likely would have ended badly for him with him taking a knee possibly to get out of the fight. We saw that from Cotto in his loss to Antonio Margarito in 2008. Golovkin would have been much more difficult adversary for Cotto to face than the feather-fisted Sadam Ali last Saturday. Cotto might not have had the ability to take a knee if he were hit squarely on the chin by Golovkin.


« Francisco Vargas vs. Stephen Smith this Sat. on HBO