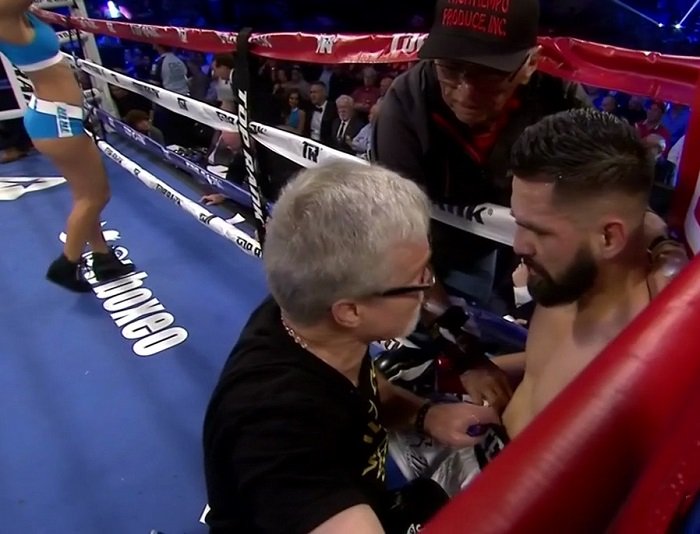 By Eric Thomas: Undefeated light welterweight contender Jose Carlos Ramirez (21-0, 16 KOs) smashed previously unbeaten #9 WBO Mike Reed (23-1, 12 KOs) in stopping him in the 2nd round on Saturday night at the Save Mart Center in Fresno, California.

The 2012 U.S Olympian Ramirez dropped the 24-year-old Reed in round 2. After Reed got back up, Ramirez finished him off with a flurry of shots that caused referee Jack Reiss to step in and stop the fight. The official time of the stoppage was at 1:43 of round 2. Reed was down twice in the round, but the referee didn’t count the second knockdown. Reed fell while trying to grab Ramirez. It looked like a knockdown, but Reiss saw it as a slip.

Ramirez hurt Reed with a 3-punch combination. Ramirez then attacked Reed with a storm of hooks to the body as he backed to the ropes. Reed dropped under the canvas from the accumulation of body and head shots.

The left hooks from Ramirez were especially devastating. After the action resumed, Ramirez unloaded on Reed with a series of body shots that put him down for the second time in the round, although the referee Jack Reiss ruled it as a slip. It didn’t matter. Once the action resumed, Ramirez continued to land withering fire on Reed until the referee had no choice but to step in and stop the contest.

Reed did land some nice left hooks during the final minute of the fight. Ramirez was focusing entirely on his offense, and he took Reed’s shots without seeming to notice. If this were a bigger puncher than Reed, Ramirez might have had problems. In the future, Ramirez will need to make sure he’s a little more careful when attacking his opponents. If he gets hit on the button with a big shot from a puncher with power, he might not get away with attacking so relentlessly.

The 25-year-old Ramirez came into the fight ranked #5 with the World Boxing Council at light welterweight. Ramirez is now expected to challenge for the vacant WBC 140 lb. title against #1 WBC Amir Imam (20-1, 17 KOs) in his next fight. Imam, 27, fought on the same card and stopped Johnny Garcia (19-5-1, 11 KOs) in a 5th round KO. Imam knocked Garcia don in the 4th round. After the round ended, Garcia opted not to come out for round 5.

Ramirez and Imam will be battling for Terence Crawford’s WBC light welterweight title. Crawford has vacated his titles at 140 and moved up to 147 to campaign as a welterweight. As good as the 5’10” Ramirez looked against Reed, he’d likely be well over his head if he had to fight Crawford for the WBC title instead of Imam. There’s a world of difference between the talent of Crawford and that of Ramirez. Crawford likely would KO Ramirez if he were the one he had to go through to win the WBC belt.

Imam has won his last 3 fights against weak opposition since losing to Adrian Granados by an 8th round knockout 2 years ago on November 28, 2015. It’s unclear whether the lanky 5’10 ½” Imam has improve since his loss to Granados, as his opposition has been so poor that it’s impossible to know if he’s gotten better or not.

In other results on Saturday’s card, undefeated light welterweight contender #8 WBO Alex Saucedo (26-0, 16 KOs) defeated Gustavo Vittori (20-3-1, 11 KOs) by a 3rd round knockout. Saucedo knocked Vittori down 3 times in the 3rd round. The fight was stopped after the third knockdown in round 3. The official time of the stoppage was at 1:16 of round 3. With the win, Saucedo captures the WBO Latino light welterweight title.

Danny Jacobs to fight in April »