Does Anthony Joshua have poor stamina? 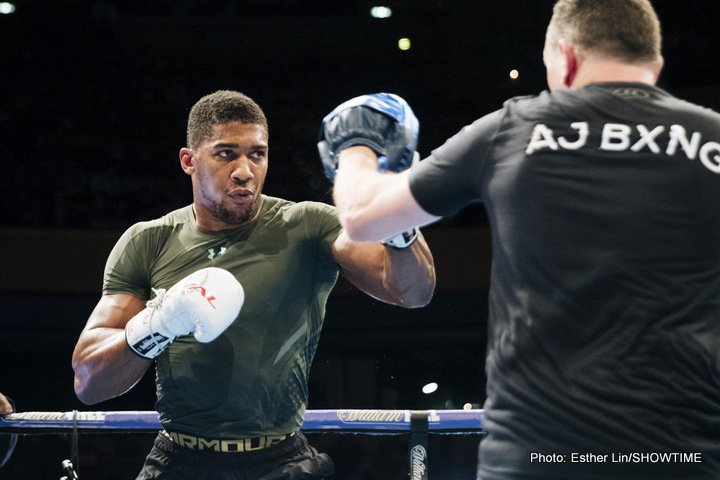 By Damian Poole: In this article I’m going to be tackling the hot debate, whether or not IBF, WBA and IBO Heavyweight Champion Anthony Joshua suffer from poor stamina as so many pundits, commentators, bloggers and even Boxingnews24 journalist have touched on. Is there any real substantial proof behind these claims? or is it just all “hot-air”?

Anthony Joshua (20-0,20 KOs) recently defeated last minute replacement opponent, Carlos Takam (36-4-1, 27 KOs) in the 10th round by TKO after producing a dominating display over the Cameroonian on Sky Box Office PPV and Showtime Boxing at the Principality Stadium in Cardiff, Wales.

6’2” Carlos Takam was drafted in to fight Anthony Joshua with just 2 weeks’ notice after 6’5” 36-year-old Bulgarian mandatory opponent, Kubrat Pulev (25-1,13 KOs) suffered a shoulder injury in sparring. Promoter Eddie Hearn said the Cameroonian-French man had been put on standby for the fight ever since the Anthony Vs Pulev fight was announced some months ago. In reality, it was Anthony who was put on 2 weeks short notice after spending months training and sparing for an opponent who was meant to be taller with a very different fighting style to Takam.

No sooner had the fight finished, the injurious Joshua crowd emerged with the usual negative remarks. And it was these comments that motivated me to write this article. The most common comments are “AJ is out of gas by the 6th” “Joshua needs to work on his stamina” “Joshua is all hype and he has major stamina issues “ “Joshua looked gassed and he put himself in that position” “Joshua just don’t have the stamina and chin to hold up to wilder.” It was not long for WBC Deontay Wilder to chimed in with his 10c worth. “If I was him (Joshua), his stamina coach needs to be fired, because there’s a lot of things Joshua is doing wrong.”

The last thing Joshua’s team need to do is take advice from someone like Deontay Wilder. He has more issues of his own that needs to be address before Wilder is qualified to comment on Anthony Joshua’s problems. I put forward this rhetorical question to my readers, who would you take advice from? Anthony Joshua, Olympic gold medallist, the 5th fastest boxer to win a world title belt and now holds 2 more in only his 20th fight, who packs out 90k stadiums and brings in massive PPV numbers and is not scared to face the best? Or Deontay Wilder, Olympic bronze medallist who was not good enough to win gold, with 39 lackluster fights and still making basic amateur mistakes, holds only 1 world title belt, unable to fill a 18k stadiums even in his home town, rarely seen on PPV and struggles to beat ex NFL football players? I know where I would put my money. I’m just saying.

So, what defines “Gassing out”? well there is no definition in the Oxford or Cambridge dictionary of “Gassing/Gassed out” that relates directly to boxing. The only source I can point to is the Urban Dictionary of the word “gassed” which means “to be burn out, exhausted, capable of doing no more.” I personally would say that’s an accurate description in relation to boxing and I believe most of you would also agree. With that in mind and we are all singing from the same page, it’s time to tackle whether or not if Anthony Joshua has gassed/stamina issues.

The assumption that Joshua has stamina issues came about after his clash with fellow Brit, Dillian Whyte. The fight only lasted 6 rounds but it was packed with action, Anthony nearly knocking Whyte out in the 1st round with a flurry of power punches. Only for Whyte to be saved by the bell. The action carried on in the 2nd round, both boxers trading heavy Blows at a fast pace. This set the tempo for the rest of the fight until the 6th round when Anthony KOed Whyte with a devastating uppercut. This was Anthony’s first fight that went longer than 3 rounds.

After watching the fight recently to write this article I could not see any case to be made for Joshua having any stamina problems or even looking gassed out. Sure, he looked a bit tired from an action packed 6 rounds, but nothing to suggest he looked anything otherwise. If Joshua was gassed out I would be expecting him to be clinching at any opportunity, spitting out his gum shield to kill some time. Maybe expect to see Anthony’s arms dropping unable to defend himself or even being pushed back onto the ropes due to exhaustion. But none of these signs occurred. I implore the readers to watch the fight again and see for yourself. But for me, Joshua did not gas out in that fight!

This next fight, many people thought Anthony Joshua gassed out against Wladimir Klitschko. Now I want to say straight off the bat, Anthony was exhausted, drained, totally spent and gassed out. You would have to be a crazy not to think so. I even noticed Anthony was spent in round 5 before the sky sports commentators spotted it. Anthony depleted most of his energy and reserve tank in round 5. Offloading power shots on the Ukrainian until he was knocked down to the canvas with Joshua already celebrating while walking off to his corner. For Joshua this is normally a done deal in the past where his opponents do not get back up off the canvas or they lose the will to carry on.

But with the highly experienced Wladimir, this was not the case. He hoisted himself back up after being rocked, composed himself and carried on fighting Anthony. Towards the end of round 5 Joshua did not have a reply to pressure Wladimir was applying. Joshua was starting to look really tired, only able to throw a handful of power punches until he was totally gassed out. At this point Anthony was unable to defend himself anymore, he stopped raising his hands in a defensive stance, instead using a lot of head movement to avoid being punched and conserving energy. His mouth was wide open, sucking up oxygen like a fish out of water while being pushed/thrown around the ring like Bambi on ice. This carried on till the 9th round where Joshua got his second wind and later TKOed the Ukrainian in the 11th round. You might think this would be a good case to make against Anthony Joshua for having stamina issues. But I believe this is a case of Anthony lacking experience, and knowledge of pacing himself more than stamina problems. But I will digress.

This is an interesting fight as Carlos recently lost (somewhat controversially) to WBA Joseph Parker. So, we will be able to compare how Anthony Joshua and Joseph Parker fared against the same opponent and how their respective stamina levels held out. I would like to mention, I will not be adding Kubrat Pulev who also defeated Carlos Takam in this comparison. That fight took place back in 2014 when Kubrat and Carlos were at different levels of fitness and experience in their career compared to more recently. Thus, it would not be a fair comparison.

Joseph Parker defeated Carlos by a 12 round unanimous decision, but we’re only going to be judging Parker’s performance up till round 10 to make this a fair comparison, as this is when Joshua stopped Takam. According to CompuBox both Parker and Joshua threw roughly the same amount of punches against Takam when calculated to 10 rounds. Parker threw 436 punches while Joshua threw 454, So the argument that one boxer worked harder than the other is null and void in this situation.

For the first 3 rounds Parker had control over the center ring, dominating and pushing Takam back. Round 4 was the first early sign that Parker was fading with Takam taking control of the center ring and forcing Parker back onto the ropes. In round 5 Parker was starting to hold Takam in exhaustion, blowing hard in the last 30 seconds. In rounds 7-12 Parker looked tired, his defensive guard had dropped and he was constantly getting tagged by Takam, again been pushed onto the ropes while Takam maintained control of the center ring. Parker now walking around and not willing to engage, only fighting in short bursts to conserve energy but just doing enough to win the rounds.

When Joshua faced Carlos, he took control of the center ring and it stayed that way until the fight ended in the 10th round. Joshua was constantly coming forward and pressuring Takam, forcing and controlling the pace of the entire fight. Joshua’s defensive arms never dropped in exhaustion, he did not clinch Takam all night long to gain precious seconds to catch his breath unlike Parker. And he certainly never looked half as “gassed out” as Parker was after the fight. I just could not see any case to question Anthony Joshua’s stamina or endurance based on the Carlos Takam fight.

In the 2nd round, Anthony Joshua suffered a broken nose when Takam came steaming in with his head. Joshua later said in the post-fight press conference that he had to control his breathing through his mouth and not his nose. From a personal point of view, I could see how this would have an impact on Joshua’s performance. I myself have a deviated septum which limits how much oxygen I can inhale, while working out at the gym. So, my endurance is not as good as it could be. But even with a broken blood-filled nose, Joshua looked in far better shape than Parker after 10 rounds.

So, to conclude, does Joshua have stamina or gassing out issues? Based on the facts presented to me and pointed out to the readers of this article. I would have to say most defiantly not. Joshua does not display any typical traits associate with poor stamina levels. Joshua looked no more tired against Dillan Whyte or Carlos Takam than Deontay Wilder did against Johann Duhaupas or Bermane Stiverne (2015). But we do not hear about wilder having stamina issues. The only occasion I can full heartily say Joshua gassed out was in his 19th fight against Wladimir Klitschko due to Anthony’s lack of experience on how to pace himself. But is that enough to condemn Joshua with the stigma of poor stamina based on one occasion in 19 fights? I’m just saying.

So why do we keep hearing about Joshua having stamina issues? Personally, I believe the problem Joshua faces is self-inflected, but to no fault of his own. He has the expectation of the boxing community and public to knock his opponents out with his “bum rushing” tactic within the first couple of rounds. But if this does not happen the rumor mill goes into over-drive and we start to hear comments like “Joshua has poor stamina because he could not knock his opponent out in the first 3 rounds”. This is a common excuse I have experienced to discredit Anthony Joshua and demean his performance in the ring. Maybe due to national pride from the foreign community, jealous of Joshua’s success, fame, attention and stealing all the lime-light from the other heavyweight’s. Or I might be down to people presuming Joshua’s large muscle mass at 250lb is impossible to carry around for 12 rounds without gassing out. To be honest It could be many reasons why, but the harder they try to discredit Joshua the more it seems like resentment and jealously.