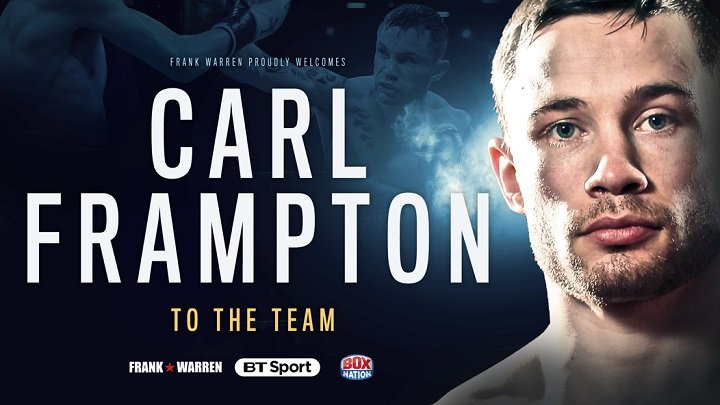 By Jeff Aranow: Former 2 division world champion Carl Frampton (23-1, 14 KOs) has signed with British promoter Frank Warren. Frampton, 30, had previously been managed by Barry McGuigan until recently after working with him since the start of his career in 2009.

”Offers on the table and I went with the best one. As simple as that. Looking forward to the future with @MTKGlobal @frankwarren_tv @btsport,” said Frampton on his Twitter.

There’s talk that Frampton’s next fight will be on November 18 in Belfast, Northern Ireland. This is on the same card as WBO bantamweight champion Zolani Tete defending his belt.

Frampton has also changed out his trainer Shane McGuigan and replaced him with Jamie Moore.

Frampton was supposed to fight this summer on July 29 against Andres Gutierrez in a WBC featherweight title eliminator. However, the fight was called off after Gutierrez suffered an injury.

The 2 fights against Santa Cruz showed that Frampton needs to go in another direction with his boxing career. Santa Cruz had a difficult style for Frampton to deal with. The first fight was one that Santa Cruz appeared to win, but the judges gave Frampton a controversial 12 round decision in New York. The crowd was a pro-Frampton crowd, which wasn’t surprising given the large Irish fan base in New York. Santa Cruz’s promoter perhaps wasn’t aware of the dynamics of having his fighter defend his title against an Irish fighter in New York.

Frampton has had problems in his last 3 fights against Santa Cruz and Scott Quigg. Whether that’s a sign of age and ring wear is debatable. It would be a good time for Frampton to target IBF champion Lee Selby. That’s a better fight for Frampton than him taking on Santa Cruz again or facing WBC featherweight champion Gary Russell Jr. Frampton might not be quick enough to deal with the speed of Russell Jr. right now. Selby would be perfect, as would WBO champion Oscar Valdez. The Top Rank fighter Valdez looked vulnerable in his recent win over Genesis Servania last Saturday night in Tucson, Arizona. Valdez was hurt on two occasions by Servania, who came into the fight with a reputation of being a weak puncher. Frampton would have a very good chance of upending Valdez if he could get that fight. That’s a match that needs to be made as soon as possible before someone else beats Valdez.

With the addition of Frampton, Frank Warren has a very good fighter that he’s added to his promotional team. Now they just need to make the right moves by targeting Valdez or Selby, who are clearly the weakest links when it comes to the champions.


« Jarrell Miller to fight on Jacobs vs. Arias undercard on Nov.11