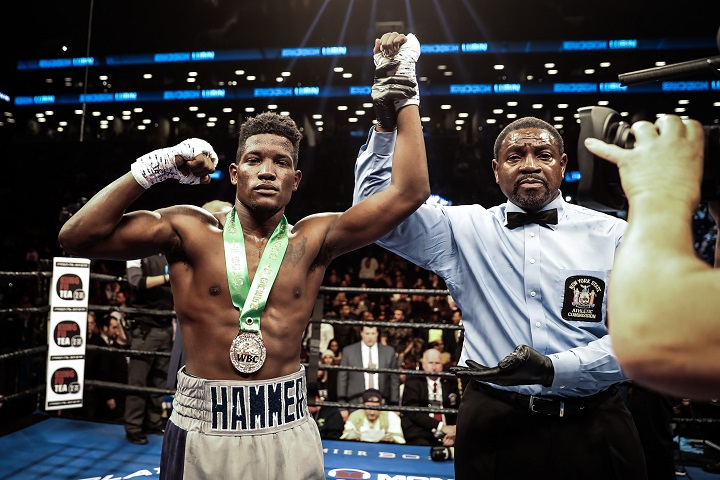 By Dan Ambrose: Three big fights junior middleweight title fights are in the works involving Jermell Charlo vs. Erickson “Hammer” Lubin, Erislandy Lara vs. Gausha and Jarrett Hurd vs. Austin Trout. These are three Premier Boxing Champion’s fights that still don’t have dates or venues, but they’re reportedly being worked on according to RingTV.

Unbeaten WBC 154lb champion Jermell Charlo (29-0, 14 KOs) and his #1 WBC mandatory challenger Erickson Lubin (18-0, 13 KOs) is a fight that will be happening soon. They’ve already agreed to the defeat, according to Ringtv. That’s one of the 3 fights that are ready to go.

The other 2 154lb fights still need to be worked on. The Charlo vs. Lubin fight could wind up on Showtime Boxing, as that network is reportedly interested in televising the fight. Charlo, 27, looked sensational recently in stopping challenger Charles Hatley in the 6th round on April 22 of this year. That fight was supposed to have been a competitive one, but Charlo was too powerful for Hatley knocking him down and stopping him in the 6th.

Jermell is the twin brother of former IBF junior middleweight champion Jermall Charlo. We recently saw Jermall move up in weight and defeat #1 WBC Jorge Sebastian Heiland by a 4h round knockout in their World Boxing Council middleweight title eliminator match. Jermall is now the mandatory challenger to WBC middleweight champion Gennady “GGG” Golovkin. But that doesn’t mean he’s going to be getting a title shot against Golovkin anytime soon if ever, because his trainer Abel Sanchez recently said that Jermall brings nothing to the table and doesn’t put backsides in the seats. Sanchez is talking about Charlo having to wait 1 year for him to get a title shot unless the WBC orders the fight. Jermell might want to think about moving up to the 160lb weight division soon as well, because where the money fights are at. Jermell captured the vacant WBC 154lb title last year in stopping John Jackson in the 8th round on May 21, 2016.

The 21-year-old southpaw Lubin has looked sensational since turning pro in 2013. He seems to be getting better and better. Lubin has the kind of talent that could give Jermell Charlo problems if he can’t knock him out like he did in his last 2 fights against Hatley and Jackson. Lubin has good punching power, size and talent. He recently defeated Jorge Cota, Juan Ubaldo Cabrera, Ivan Montero and Daniel Sandoval. The one negative that you can say about Lubin is he hasn’t fought anyone good as of yet. We don’t know how he’ll react when he gets inside the ring with a talented fighter like the 6-foot Charlo. He might be over his head. He also might prove too much for Charlo. That’s what’s so intriguing about this fight. It’s arguably the best of the 3 junior middleweight fights. Lubin had the chance to compete in the 2012 Olympics if he had wanted to, but he opted to turn pro and go for the money with his boxing career. Lubin likely would have won a medal in the 2012 Olympics if he had competed. Lubin earned a title shot against Charlo by knocking out Jorge Cota in the 4th round in a WBC title eliminator on March 4.

There’s also an agreement between WBA Super World junior middleweight champion Erislandy Lara (24-2-2, 14 KOs) to defend his title against unbeaten #8 WBA Terrell Gausha (20-0, 9 KOs). This will be one of Lara’s toughest fights since his loss to Saul Canelo Alvarez on July 12, 2014. The 34-year-old Lara has been facing weak opposition in his last 5 fights since losing to Canelo. Since that defeat, Lara has defeated 39-year-old Ishe Smith, 37-year-old Delvin Rodriguez, 41-year-old Jan Zaveck, Vanes Martirosyan and 37-year-old Yuri Foreman. It appears that the Cuban Lara is almost exclusively been fighting older fighters that have been threat to beating him. It’s too bad, because Lara is capable of a lot more than beating up on old timers that are no longer in their prime. Lara hasn’t done much to increase his popularity in the boxing world due to his soft match-making. Three years after his loss to Canelo, Lara hasn’t done much to take his career to the next level and make a case that he rates a rematch with Canelo or a fight against Gennady “GGG” Golovkin. Lara makes it easy for them to reject a fight against him because he’s playing it safe and not taking risks with his boxing career.

Gausha fought for the U.S in the 2012 Olympics. The 29-year-old Gausha has been a pro since 2012, and he has recent wins over Luis Hernandez, Steven Martinez, Orlando Lora and Said El Harrak. It’s still too early to tell how good Gausha is because he’s not been fighting quality opposition. He does seem to have a lot of talent, but his punching power isn’t that great. If Gausha is going to beat Lara, he’ll need to outbox him. Gausha is a big step up for Lara. We’re going to find out if Lara still has the talent he showed 3 years ago when he gave Canelo all kinds of problems in losing a 12 round split decision. The judges felt that Lara didn’t do quite enough to rate a win over Canelo. If Lara had been a little busier and thrown more power shots, he likely would have won the fight without any problems. He was fighting too defensively and mostly just jabbing instead of letting his hands go. Lara is getting older now, and he’s not done anything to expand his game. Lara should have insisted that his management start matching him against better fighters 3 years ago. You’d like to think that if Lara beats Gausha, he’ll keep facing good fighters like him, but I don’t think that’s going to happen. If Lara defeats Gausha, I see Lara going back to facing weak opposition over and over again until his next mandatory defense is do.

IBF 154lb. champion Jarrett Hurd (20-0, 14 KOs) will be defending his IBF title against former WBA 154lb champion Austin “No Doubt” Trout (30-3, 17 KOs). Hurd, 26, recently beat Tony Harrison, Jo Jo Dan, Oscar Molina and Frank Galarza in his last 4 fights. It’ll be a good test to see how good Hurd is in facing the 31-year-old Trout. He’s been out of the ring for an entire year since his 12 round unanimous decision loss to former IBF junior middleweight champion Jermall Charlo on May 21 last year. It’s unclear why Trout hasn’t fought since a year ago. He should have returned to the ring a long time ago to resume his boxing career instead of sitting out of the ring for the last 15 months. It’s no smart for fighters to stay inactive for as long as Trout has.

Also a fight that is being worked on is former junior middleweight title challenger Julian “J-Rock” Williams vs. Tony Harrison.


« McGregor not impressed by Golovkin and Canelo