Sanchez: Canelo will be called a bum after GGG beats him 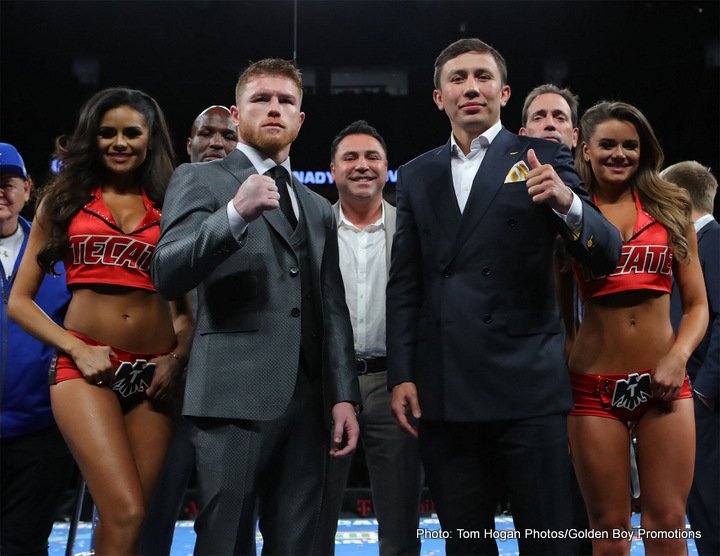 By Dan Ambrose: Gennady “GGG” Golovkin (37-0, 33 KOs) won’t receive credit from the boxing media after he defeats the popular Mexican fighter Saul “Canelo” Alvarez (49-1-1, 34 KOs) on September 16, says Triple G’s trainer Abel Sanchez. He doesn’t think the media will give Golovkin credit for beating the 27-year-old Canelo, despite the fact that many people in the media are picking him to beat GGG.

Sanchez notes that Golovkin didn’t get credit for beating Danny Jacobs on March 28, even though he was viewed as the second best fighter in the middleweight division. The media and boxing fans didn’t give Golovkin his props for doing the job against a very mobile and reluctant Jacobs, who didn’t want to come forward and trade with Golovkin the way that many of his other opponents had done.

“After the fight, he will be a bum also, if you listen to the experts,” said Sanchez to RingTV.com in talking about how Canelo will be perceived if/when he loses to GGG. “Folks seem disinclined to go in the direction of offering credit to the victor. Instead, they often degrade the worth of the loser. “Ah, Canelo was a blown-up 154-pounder,” said Sanchez.

Sanchez is dead on correct in talking about some of the excuses that will be floated by some in the boxing world if Canelo loses to Golovkin. They’ll point out quite correctly that Canelo has been fighting at 154, and that he’s not big enough or experienced enough to be fighting someone like Golovkin. The fans will say Canelo is fighting in the wrong division, and that he needs to move back down to 154.

The problem is Canelo is having problems making weight for the 154lb division, which is why he’s moved up to middleweight. Canelo can probably melt down to 154 for a little while longer, but he would be looking at having to fight the dangerous guys in the weight class like Jarrett Hurd, Demetrius Andrade, Jermell Charlo and Erislandy Lara. Those are all difficult fights for Canelo, and they’re not big money fights. Those are low level HBO fights.

Canelo would likely fight all of those guys on HBO PPV, but there wouldn’t be a lot of buys and he might lose. There’s a good chance that Canelo would lose to all of them. If he’s weight drained from having drained down to make 154, he’s not going to be able to fight as hard as he can if he’s at his normal weight class.

“We are preparing for the toughest fight to date,” said Sanchez in discussing the Canelo vs. GGG fight.

On paper, Canelo might be the toughest fight to date for Golovkin, but it might not be nearly as tough as the Danny Jacobs fight. Canelo is a good fighter, but he’s not proven himself yet against the best guys in the sport. Most of the guys Canelo actually beat weren’t the cream of the crop in the divisions they were fighting. I don’t consider Canelo’s wins over Erislandy Lara and Austin Trout as wins. The outcomes in those fights were inconclusive.

The judges gave the wins to Canelo, but I don’t think he showed that he was good enough to deserve the win. Canelo might end up being no tougher than David Lemieux. Canelo doesn’t hit as hard as Lemieux. He also doesn’t hit as hard as Curtis Stevens. Golovkin was able to take his power in the few times that Stevens landed something against him. Canelo isn’t much taller than the 5’7” Stevens. Canelo is shorter than the 5’9 ½” Lemieux, 6’0” Martin Murray and 5’10” Willie Monroe Jr.

Golovkin handled their height with ease. Canelo might prove to be too short for him to do anything against Golovkin. That’s one thing that shorter fighters that move up from the 154lb division have to deal with when they move up to middleweight. If they don’t have the height to match-up well in the 160 lb. weight class, then they end up having problems and not doing well.

Canelo’s promoters at Golden Boy are probably going to be looking out for him to make sure he doesn’t get put in too much size mismatches. However, if Canelo is going to stay at 160 for the remainder of his career, then he must show that he can deal with the taller middleweights like Danny Jacobs, Jermall Charlo, Willie Monroe Jr. and David Lemieux. Monroe Jr. was surprised that Canelo didn’t fight him after he defeated Gabriel Rosado last year. It was said before the Rosado-Monroe Jr. that the winner of that fight would be able to fight Canelo.

Monroe then pulled up what many boxing fans felt was a big upset in beating Rosado by a 12 round unanimous decision on September 17 on the undercard of the Canelo vs. Liam Smith card at the AT&T Stadium in Arlington, Texas. Golden Boy didn’t match Canelo up with Monroe Jr. after that. They instead found an overweight Julio Cesar Chavez Jr., who had to trim off 70 pounds to get down to the 164.5 lb. catch-weight for the fight Monroe Jr. didn’t blame Canelo for him not fighting him. He blamed Golden Boy for them not letting him take the fight.

To get back to what Abel Sanchez said about Canelo being called a bum after Golovkin beats him, I’m afraid that he likely will be viewed as that. It’s too bad because Golovkin will deserve to be given credit if he can beat Canelo. If the boxing fans end up criticizing Canelo and not giving Golovkin credit, it’s going to be sad.

Canelo can show how good Golovkin is if he rebounds from a loss to him by going on and accomplishing big things in the middleweight division by taking on and beating the likes of Jermall Charlo and Danny Jacobs. I don’t think that’s going to happen though. I think it’s unlikely that Canelo will fight those guys unless they start looking flawed all of a sudden. It’s bad for Golovkin.

The only way he can get credit for beating a good fighter at 160 is if he defeats Jacobs in a rematch. The fans aren’t going to give Golovkin credit for defeating Canelo, Billy Joe Saunders or Jermall Charlo. It’s going to take a rematch with Jacobs to do something to get the boxing fans to start giving him praise. Golovkin will need to chase Jacobs around the ring and knock him out to get the fans talking about him the way that he wants.

Golovkin will be appreciated in the future if Canelo rebounds from a loss to him and accomplishes big things in the middleweight division. If Canelo wins titles, unifies the 160 lb. division and defeats the top guys like Charlo and Jacobs, then Golovkin’s legacy is going to be enhanced if he can get Canelo.