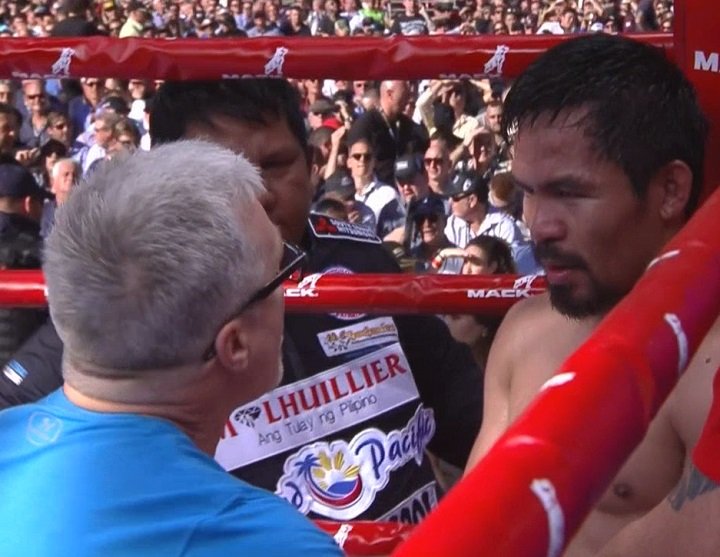 By Jim Dower: Manny Pacquiao said earlier on Wednesday that he plans on resuming his boxing career following his controversial los to little known Australian fighter Jeff Horn on July 2 in Brisbane, Australia. The results of that fight have a lot of fans crying ‘robbery.’ Pacquiao hasn’t said if he’ll fight the 29-year-old Horn again, but it’s expected that he will do that.

There’s a lot of money for Pacquiao to make in a rematch with the Australian school teacher, and it’ll give him a chance to avenge the defeat. Pacquiao also will have the opportunity to win back his WBO welterweight title that is now in the possession of Horn.

The judges scored the fight for Horn 117-111, 115-113 and 115-113. The scores did little more than to infuriate many boxing fans watching the fight at home and viewing it as a hometown decision for Horn. Pacquiao landed twice the amount of shots with twice the accuracy of Horn. Pacquiao landed 182 of 573 punches for a connect percentage of 32, according to the statistic from CompuBox. Horn landed 92 of 625 punches for a 15 percent connect rate. The stats for the fight overwhelmingly favor Pacquiao. You don’t usually see a fighter losing when they have much of an edge in stats over their opponents. The only times when you do see a fighter losing under those circumstances is when they’ve been knocked down or knocked out. Neither of those things happened in the Pacquiao-Horn fight.

“I love this sport and until the passion is gone, I will continue to fight for God, my family, my fans and my country,” said Pacquiao on his Twitter.

If the 38-year-old Pacquiao fights Horn again and loses in a non-controversial fashion, it’s hard to believe that he’ll continue his long boxing career. What’s working against Pacquiao retiring though is the fact that the rematch against Horn will take in Australia. It puts Pacquiao in the position where he may need to knock Horn out for him to get the win. Horn will be in front of his own boxing fans, and it’s going to be tough for Pacquiao to win rounds until he can make all the rounds like the 9th in his last fight.

A knockout is probably the best option for Pacquiao. One thing that you have to hope is that a good referee is assigned to the fight that will control Horn’s fouling. Pacquiao was really roughed up badly by Horn. It looked like a boxer facing an MMA fighter in the previous Pacquiao vs. Horn fight. Horn was hitting Pacquiao with head-butts, putting him in headlocks and making it rough on him. Usually when a fighter is roughing up another fighter, the referee stops the action and gives warnings to the guy that is doing the fouling. That didn’t happen for the Pacquiao-Horn fight.

Horn just happened to be the hometown fighter that was doing the roughing up. If Pacquiao was the one doing the fouling, then it wouldn’t have been viewed as bad, given that he lost the fight. But with Horn winning a controversial 12 round decision and getting away with roughing Pacquiao up, it tainted the fight in my opinion. It’s difficult to understand why the referee didn’t step in to address Horn’s roughing up of Pacquiao. The fight would have been different if Horn had lost a point for his accidental head-butting or his use of headlocks, both of which happened frequently during the fight. If Horn couldn’t use those tactics, would he have done well? I don’t think he would have. Horn’s head-butts, accidental or not, were a big part of what made him so effective. His head was like a third arm out there. He was nailing Pacquiao in the face with his head throughout the fight, and it caused him a lot of problems. Pacquiao was cut twice from Horn’s head clashes. The cuts bled most of the fight, bleeding down into his face and onto his chest, making him look like a bloody mess.

You hate to say that Pacquiao has no other real choices for his next fight but to face Horn again, but that pretty much is the extent of it. Pacquiao’s promoter Bob Arum mostly matches Pacquiao against fighters from his Top Rank stable. If you look at Pacquiao’s fights in the last 8 years, they’ve pretty much mostly been against Arum’s Top Rank fighters.

If Pacquiao says no to a rematch with Horn, who the 86-year-old Arum co-promotes, the options for Pacquiao will likely be a couple of other Top Rank fighters in Terence Crawford and Konstantin Ponomarev. In a perfect world, Arum would offer Pacquiao a shot at fighting guys like Adrien Broner, Amir Khan, Keith Thurman, Danny Garcia, Shawn Porter or Miguel Cotto. That’s not likely to happen. It would be nice to see Pacquiao put in with some interesting opponents for a change. Horn was not well known in the U.S. The fight was seen by a lot of American boxing fans, but only because Arum put the fight on free television on ESPN. It wasn’t even on pay-per-view. You can only imagine what kind of dreadful PPV numbers a fight between Pacquiao and Horn would have done in the U.S for their July 2 fight.

The World Boxing Organization had 5 independent judges review the Pacquiao-Horn fight, and they scored it for Horn. The review and re-scoring by the 5 judges hasn’t changed the mind of the fans who felt that Pacquiao was ripped off in Australia. Horn is happy about the favorable re-scoring of the fight, as he now feels validated. But it hasn’t done anything to change the minds of the boxing public. They still see Pacquiao as having been robbed in Australia.

”Let the people judge for themselves. People saw what happened,” said Pacquiao to CNN Philippines in response to the results of the WBO’s 5 independent judges re-scoring of the Pacquiao-Horn fight. ”We have seen wore judgments in the past where judges manipulated results. Nothing suirprises me now.”

It’s always bad news for boxing when you get a controversial decision like the Pacquiao-Horn fight. Hopefully the fans aren’t averse to seeing a rematch between the two fighters. Horn has got to be pleased with Pacquiao revealing that he wants to continue his boxing career. Horn probably assumes that Pacquiao will want to fight him again. If Pacquiao decides that he doesn’t want to risk losing another controversial decision to Horn, he can move on without fighting him again. That would leave Horn in the position where he would need to look for a unification fight against one of the other welterweight champions in Keith Thurman or Errol Spence Jr.

You can argue that Horn would be saying goodbye to his WBO title, because those guys are not the type that would leave it up to the judges. The blueprint in how to beat Horn is already there from how Pacquiao had him close to being knocked out in the 9th. The money that Horn can make fighting Spence or Thurman likely won’t be as good as it would for a rematch with Pacquiao. Thurman and Spence aren’t big stars in the boxing world. The casual fans in Australia likely have never heard of either of those fighters. They’ve obviously heard of Pacquiao, which is why Horn’s promoters were able to sell over 50,000 tickets for the Pacquiao-Horn fight at the Suncorp Stadium in Brisbane, Australia.