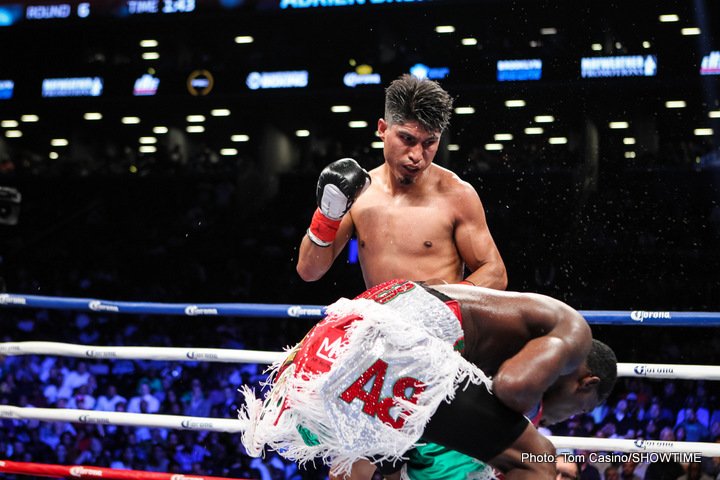 By Jeff Aranow: Unbeaten Mikey Garcia (37-0, 30 KOs) says he’d take a fight against WBA/WBC welterweight champion Keith “One Time” Thurman (28-0, 22 KOs) if the boxing fans and the networks want to see the fight.

We saw last night that Garcia has the talent to beat Thurman. Garcia easily beat former 4 division world champion Adrien “The Problem” Broner (33-3, 24 KOs) by a 12 round unanimous decision in a fight televised nationally by Showtime Championship Boxing at the Barclays Center in Brooklyn, New York. Garcia would need to lean more on his skills for him to defeat Thurman. He can’t try and bang Thurman out. Garcia doesn’t have Marcos Maidana power. That was shown clearly last night. Garcia’s punches lacked the thudding power that we saw in Maidana when he fought Broner in 2013. Thurman is a much better puncher than Garcia. Garcia has the counter punching ability and the ring IQ to defeat Thurman.

Garcia, 29, says he would take the fight against Thurman, but it’s unclear if he’s serious. It would be a tremendous risk for Garcia to move up to 147 to take on Thurman. Garcia just moved up from 135 to face Broner at 140.

If Garcia moves up another division, he would be taking a major career step in fighting a power puncher like Thurman, who isn’t easy to hit. Garcia, 5’6”, would be giving up an inch and a half in height and an inch in reach to the 5’7 ½” Thurman. The real problem for Garcia would be the power and speed or Thurman. He’s very fast and he hits hard. Thurman hits a lot harder than Adrien Broner. Garcia would pay the price if he came forward looking to last.

“I would do it,” said Mikey Garcia about fighting Keith Thurman. “If it’s a good fight that the people and the networks want to discuss, I’m open to discuss that too. He’s a great champion. He’s a good fighter. He’s the unified champion at welterweight, so that would be a great match-up and a great accomplishment. It’s a big challenge, but that’s what we want. That’s exactly the kind of fight we want, a big challenge. If I want to be remembered in the sport, these are the fights you got to take. I could take easy fights, fighting top contenders. But easier fights don’t really do anything. The boxing fans want to recognize you and remember you. That’s not going to help build a legacy,” said Garcia.

If Mikey Garcia wants to become super popular in a real hurry, he’ll take the fight with Thurman. Even if Mikey loses that fight, he’ll get much more attention from the boxing public than if he moves back down to the lightweight division and faces Jorge Linares or Terry Flanagan. Those are not big fights. They are safe ones for Garcia. He can probably beat both of those guys with ease. But those aren’t fights that will attract nearly as much interest from the U.S boxing public than a fight against Keith Thurman.

Mikey will be turning 30 in December. He doesn’t have much to show for himself in terms of big fights in his 11-year pro career. The biggest fights thus far are Broner, Roman Martinez and Orlando Salido. Only the Broner fight was considered to be a big fight, as far as the causal boxing fans. Mikey can’t afford to wait another 11 years to take another big fight. If he can get the Thurman fight, it would be a tremendous fight.

Right now, Thurman is coming back from elbow surgery. He’s talked about wanting to return to the ring in December. Shawn Porter, Danny Garcia and Errol Spence Jr. all want to fight Thurman. The question is would Mikey be able to step in front of them to get a fight with Thurman?

Garcia would be the underdog against Thurman. It would be a bad style match-up for Garcia. He would need to change his fighting style completely to have a chance at beating Thurman. That means that Garcia would need to become the aggressor, and he would have to throw a lot of shots. It wasn’t a good sign that Garcia started to fade in the last part of his fight against Broner last Saturday.

If Garcia fades against Thurman, he’d be in trouble. Thurman has questionable stamina as well though. He gassed out in his last fight in March against Danny Garcia. To be sure, Danny had a lot to do with that with the way that he applied a lot of pressure on Thurman, forcing him to fight harder than he was willing or capable of doing. I don’t think Mikey could do the same thing because he looked like he was tired in the las 4 rounds of the Broner fight.

Besides talking about Thurman, Garcia also mentioned a possible fight against Vasyl Lomachenko. Garcia would take that fight if Lomachenko decides to move up to the 135 pound. Lomachenko has said in the past that when he moves up in weight, he would want time to get adjusted to fighting at lightweight. This means Lomachenko wouldn’t go into a fight with Garcia for at least one or two fights after he moves up to 135.That’s a fight that probably wouldn’t take place until at least 2018 at the earliest. Right now, Garcia’s popularity is high because of his win over Broner. He cannot afford to wait 1-2 years for Lomachenko. Garcia needs to fight someone the boxing public cares about right now.

Garcia said that he’ll move back down to lightweight if he can get a unification fight. He mentioned Jorge Linares. That’s the fight that Garcia wants. Linares is already fighting Luke Campbell. That’s going to be a tough fight for Linares. He might lose that fight. If Campbell wins the WBA belt, he’s probably not going to fight Garcia. Campbell’s promoter is Eddie Hearn, and he has a habit of making sure he matches his fighters in fights that they have a good chance of winning. I don’t think he’ll bother to put Campbell in with Mikey.